Thomas started kindergarten, and can we just let that sink in for a second? No one believes me when I tell them that Thomas, the same kid who spent his early years scaling tall objects, flooding the bathroom, and otherwise giving his mother a heart attack, is joining the ranks of the educated. 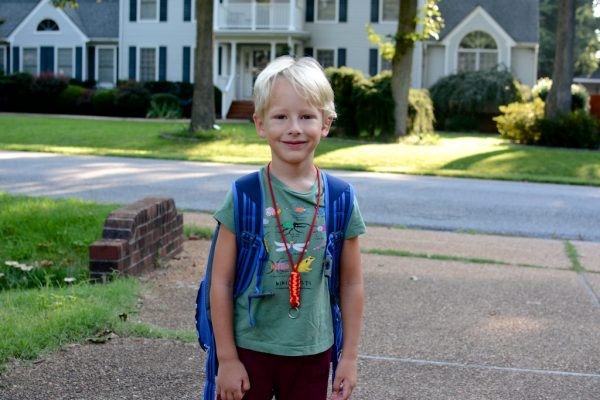 They especially don’t believe me when I go on to explain, “Yup! And he was actually supposed to go last year!” 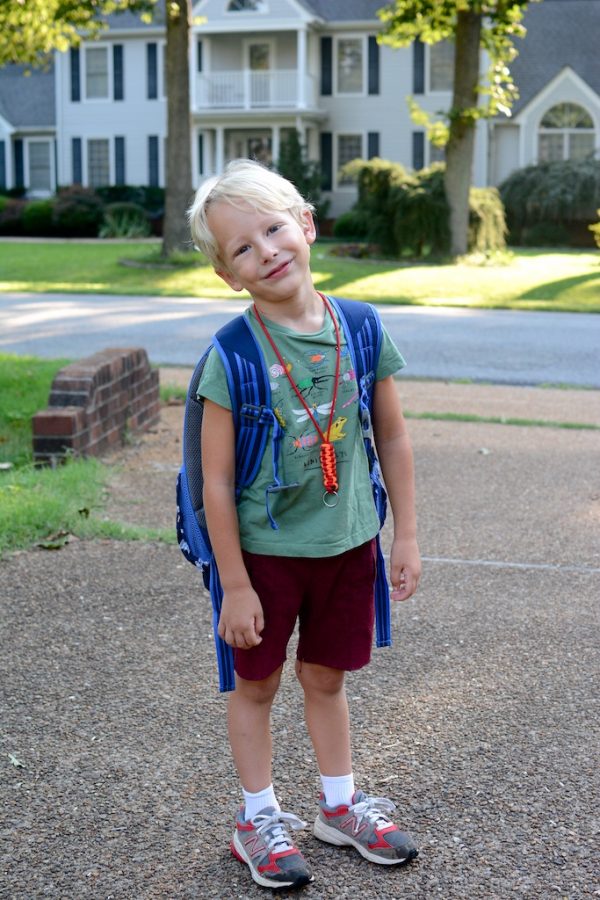 We went to a few kindergarten meet-ups, and at every single one, someone would say to me, “Oh he’s your third! You’re a pro at this!” And I would respond by bursting out in tears.

He’s my third, but it’s his first day. Childbirth, first steps, kindergarten — each kid is their own person with a unique set of gifts and challenges — and for that reason these milestones are never ever rote.

I am not a pro at this. Sure, I know the ropes of packing lunch and labeling school supplies, but trusting the big wide world with my kid is not one of my strong suits.

Thomas, though? He’s ready. He’s so ready, so excited. Even I couldn’t deny it.

I asked him what I should do if I find a cool bug while he’s gone, and he didn’t hesitate, “Put it in a container so I can see it when I get home.”

To translate, that was Thomas’s way of saying, “Things will be different, but it’ll be ok, Mom.”

Then he found this mushroom and gave it to me for safekeeping. 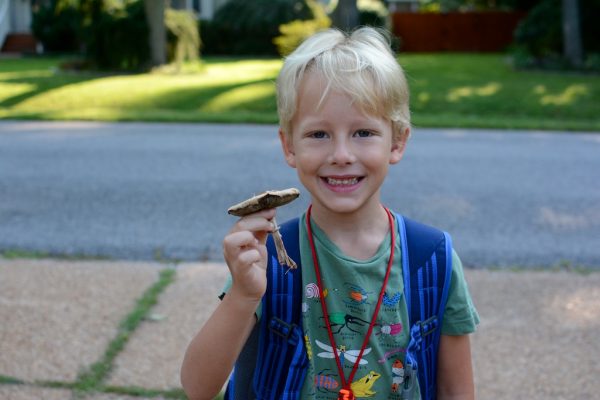 Our school district does a staggered start — so Thomas went to school Monday and Tuesday, then he had Wednesday and Thursday off. This helps the teachers get to know the kids in a smaller group, and helps the moms who are weepy about how “things are changing forever!!!!!!!!”

It also gave Thomas a chance to gloat to his older siblings about how theWe y had to go to school and he doesn’t! Na-na-na-na Boo-boo! (Do kids even say that anymore? Probably not.)

We tried to fill our home days with fun — a last adventure before heading back to school for the rest of his childhood. 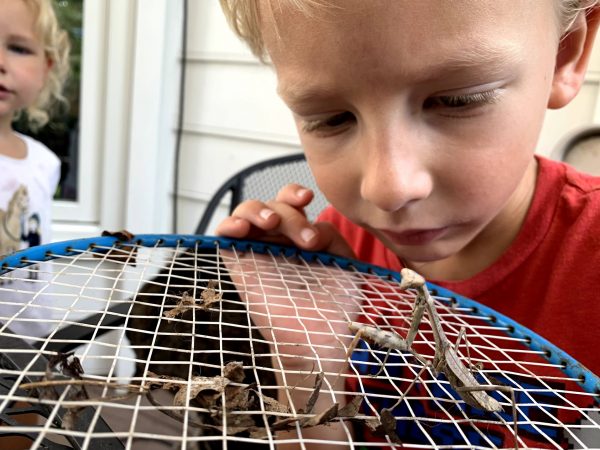 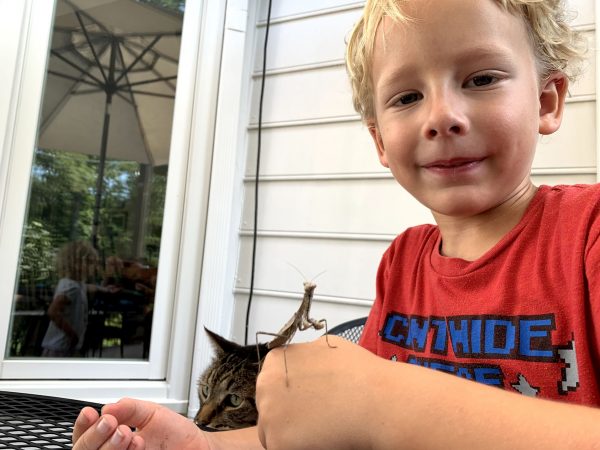 We went on a bike ride at a nearby park and Anna found a creek with a little beach. She mentioned that it would be a good place for a picnic and Thomas replied, “Yeah but we would have to do it at dinner because David, Mary, and I will be in school!”

These are the times my kids help me see what’s right in front of me. Here I am thinking about how this is our LAST adventure and Thomas is looking at what’s ahead — he goes to school now! Change the picnic plans, Mom! 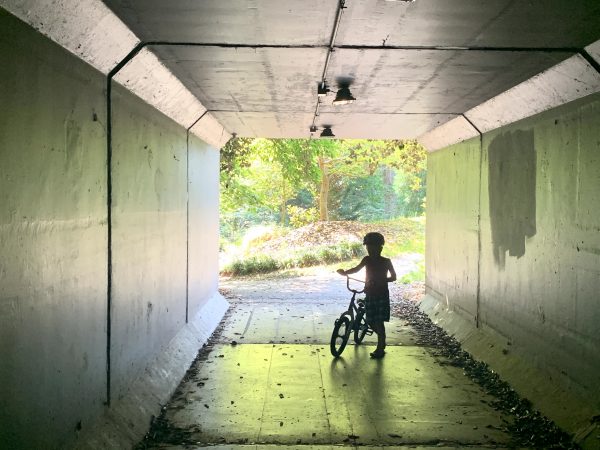 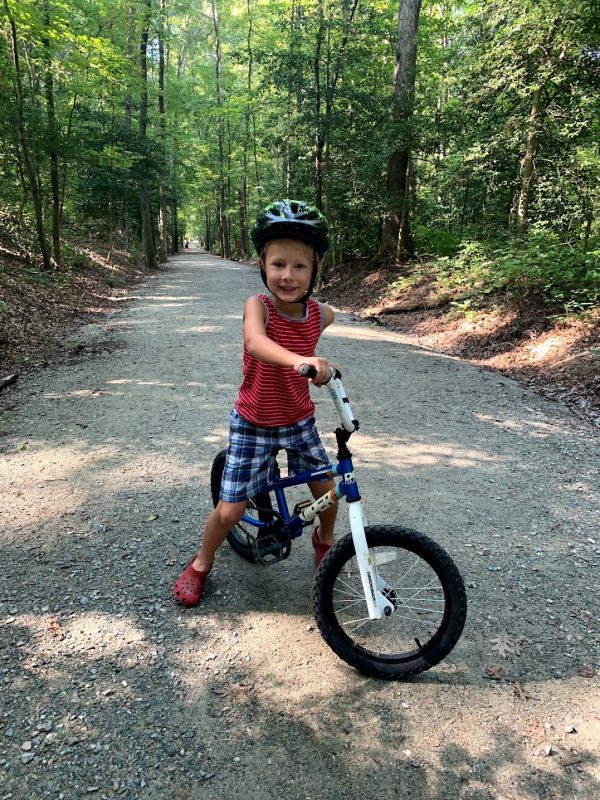 I’ve always said that sending Thomas to school feels a bit like putting an exotic animal in the zoo, and even though all signs point to him being ready, it still feels that way.

His kindergarten teacher sent a form home for us to fill out — I crammed four lines on to the two empty lines and almost added a post-it note with just a few more things that the teacher needs to know about Thomas. I forget that Thomas is going to show his teacher who he is in a fuller way than I ever could write, regardless of how much room I get on a form. Plus, he’ll be a different kid in school than he is at home with me, in his underwear, spraying the hose in the backyard.

That’s the problem with the metaphor. It limits school and it limits Thomas. You’d think I’d already know this after seeing my two older kids succeed in school, but let’s remember that I’ve already established myself as a slow learner when it comes things like this. School has challenged my kids in amazing ways and brought out new sides of them that I’ve never seen at home.

For that reason, I’m excited for Thomas. All the sadness I feel about him growing up, doesn’t mean that this isn’t going to be an amazing year. 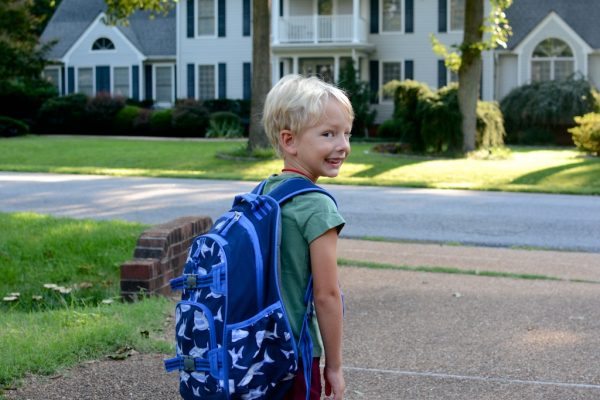 There he goes, off to school, another major milestone in the rearview mirror.