When I asked David what he wanted to be for Halloween last year, he emphatically said “A STELEKON!”

So I started looking around on Pinterest and trying to figure out how I could make on myself. Emphatically.

I found a bunch, but this was easily my favorite. Comfy, cute, and cheap to make on your own. I looked at the instructions and thought two things: 1) I have a sewing machine, but I only sort of know how to sew. 2) When I’m in the planning stages I can be really really ambitious about my time and abilities.

I showed the idea to my sister-in-law (who has a lot of sewing experience) and she immediately said, “This looks really involved. I’d just glue the pieces on.”

And, with that, she saved Halloween. It was super easy and super cheap; here’s how I did it.

I started with black pants and a long-sleeved t-shirt that I got at Target for $5 or so (similar).

To make the bones, I used one of Tom’s worn-thin white undershirts.

I found a printable template online (here), but drawing my own seemed as easy as printing and tracing — though I did use a ruler to help with the ribs.

(These are all iPhone photos because, remember when our house got robbed? I made the costume before we replaced our camera, so iPhone was the best I could do.) I used most of the bones more than once (i.e., two forearms, two femurs, etc.), so I drew some arm bones on a piece of paper and traced them a few times. The spine was a series of circles, and used different measuring cups and spoons as guides. Everything fit on the front and back of one men’s size medium undershirt. Before cutting everything out, I painted the pieces with glow-in-the-dark paint. This might have been the most time-intensive part of the whole process. I applied the paint liberally, and did my best to smear it evenly with my fingers. After the first coat, I looked at the result in a dark room and was underwhelmed. It wasn’t bright and looked like a poorly-executed craft. I ended up applying several more coats, and each coat needed at least 12 hours to completely dry. So I painted, hung them on a drying rack over night, then started over until I was happy with the results. Oh, and you also have to keep your toddler from taking it off the drying rack and running around the house. On second thought, that’s the most time-intensive part of this process.

When I was done, I cut out all the pieces.

When I showed them to David he said, “Where’s my bat costume? I want to be a bat!”

And I said something like, “YOU ARE GOING TO BE A SKELETON OR I AM CANCELLING HALLOWEEN!” Finally, I glued the pieces to the black shirt and pants using fabric glue. I applied the glue pretty liberally as well, making sure to get it close to the edges. It looks even better on. My favorite part — glow-in-the-dark is amazing. We picked a few accessories, a skeleton hat and skeleton gloves (that we lost way before Halloween), at Dollar Spot at Target. Those scary hands and that skeleton attitude, though? Those aren’t available for purchase. Those are all 100% David. A year later, David still asks to wear his skeleton costume…and I let him. He wears it to the playground, the grocery store, to friends’ houses.

And if he wants to, I’ll let him wear it again on Halloween. But I might be willing to Google bat costumes, too.

Some of the items used:

Glow in the dark paint 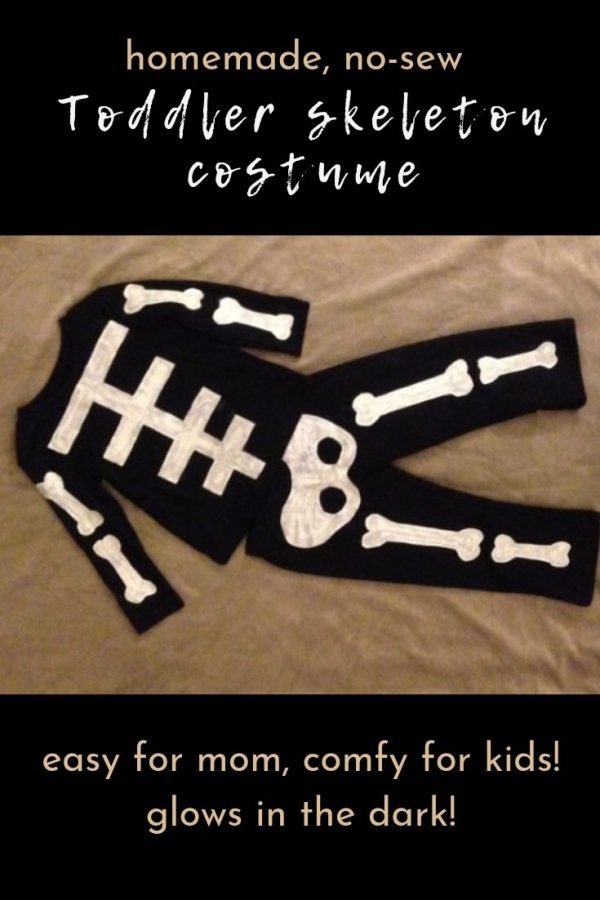