We have a rule in our family about Halloween. If it involves any help or purchasing from me, you must decide on your Halloween costume by October 1.

(Or, in Anna’s case, her Halloween costume was decided for her six years before she was born when my mom bought David this toddler-sized dragon costume.) 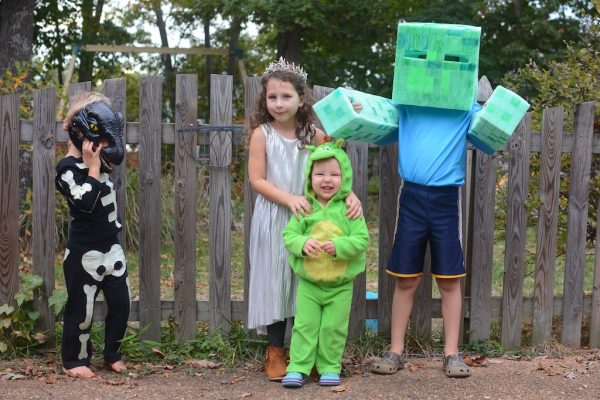 The October 1 deadline gives me a full thirty days to research, purchase supplies, pile those supplies on our dining room table, and procrastinate actually putting together the costume. I need all that time, ok?

My kids’ elementary school has a Halloween celebration a week before Halloween. The kids love this tradition, and I do too except that it moves my costume-completion deadline up an entire week. 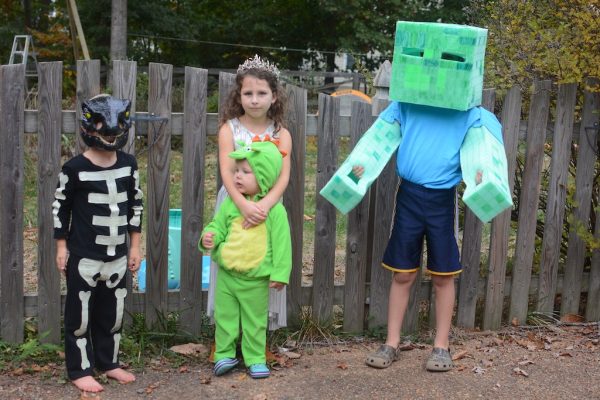 Making my kids’ Halloween costumes has always been something I enjoy doing. It goes in the same category as making muffins from scratch and hand-knitting their hats. It’s not necessary, and thy might not even appreciate it. But I enjoy doing it, so I’ll put up with the time and mess and resulting carpal tunnel syndrome.

This year David asked to be a Minecraft zombie. We looked it up online, found a few costumes on Amazon and at Target. I asked David if he liked any of the costumes and David said, “I want you to make one for me!”

Excuse me, but how does David already know that they way to get me to do absolutely anything is to express confidence in my homemaking abilities?

I immediately closed all tabs and opened up Pinterest. We agreed on this one. David liked how it looked and I liked how it said “no sew.”

It looked doable, even though I did actually laugh out loud at the part where it said it would take three hours. THREE HOURS! HA! Perhaps three hours in football time. You know, when there are two minutes left on the clock and four days later the game is finally over? 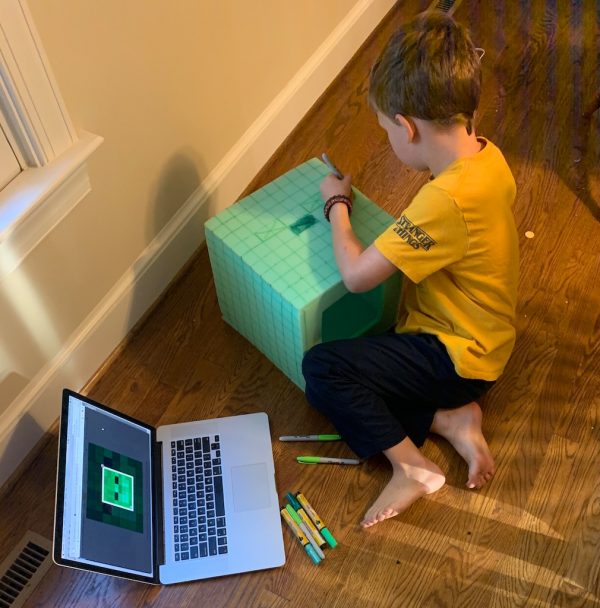 David following the template for the face colors.

Mary and I coloring once David got bored. 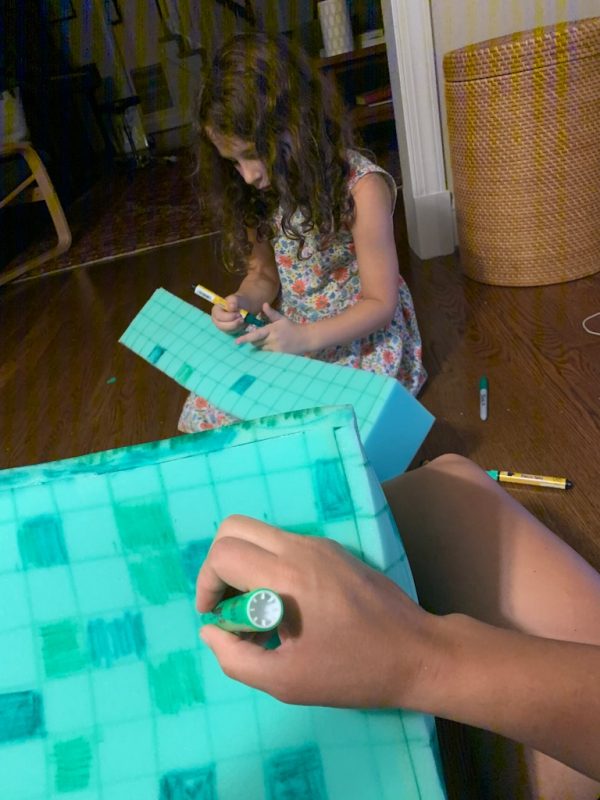 After one very expensive trip to JoAnn Fabric, two afternoons of measuring and cutting, one burned finger from a hot glue gun, and all of the ink in eight green markers, we were done.

It took six hours, not including the several adjustments we had to make. 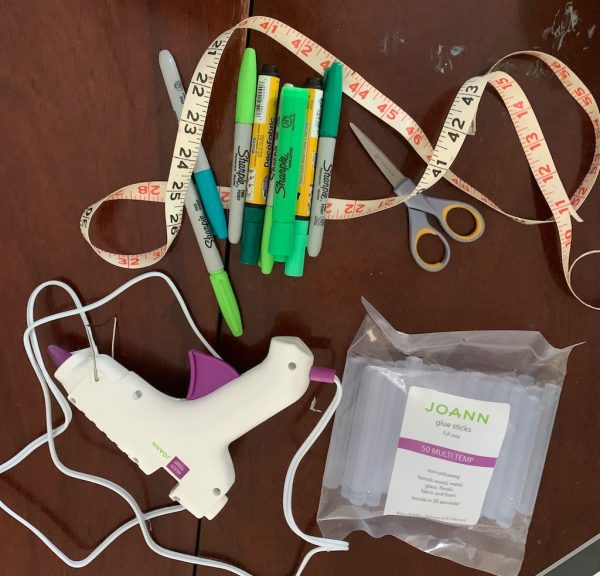 It’s not perfect. The edges are ragged and you can tell that we weren’t all-in when it came to coloring. The fit is a little wonky.

But David was thrilled, and once he put it on I couldn’t stop smiling. 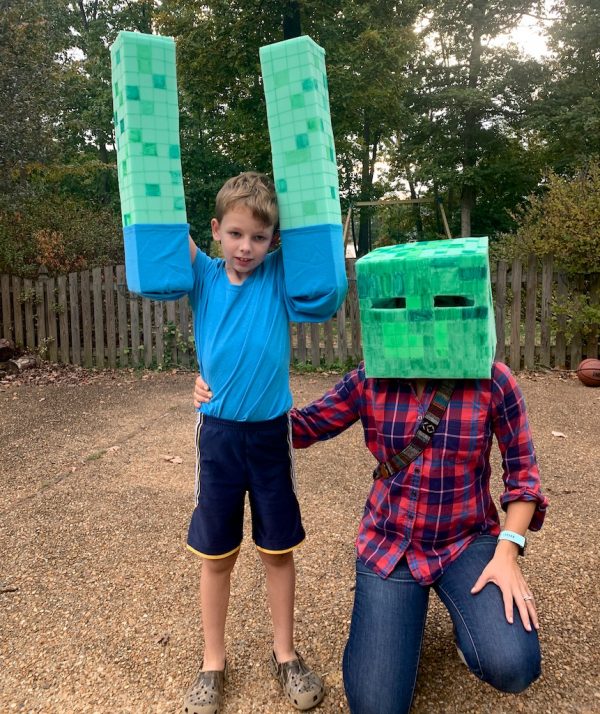 Later we went to the school Halloween party. Kids were running around like lunatics and I realized this is the one time of year that their outfits match their insane-scary-out-of-control behavior. Ghosts, witches, and maniacs everywhere.

All the kids were wearing costumes that ranged the spectrum of creative, traditional, funny, spooky, and intricate. I immediately noticed that most of the costumes were store-bought. I promise, this was not a judgmental observation. It was much more of a “why in the world didn’t I just buy  his costume at Costco” observation.

I like to think that homemade costumes will save money, are eco-friendly. But in this case neither of those things were true. And I’d love if this had been more of a mother-son bonding opportunity, but in this case I did most of the work while he was in school.

And while I enjoyed doing it, if I’m honest, it just made for a stressful week and an even-messier-than-usual house.

Less than five minutes into the Halloween party, David asked me to hold his Minecraft head. By the end of the night one of the arms had split open.

After the party, we walked to the van and David was tired of struggling with his costume, so Tom carried the whole get-up tucked under his arm.  I wondered how in the world David would ever manage to wear it during Halloween.

Is it worth it? All that money and time and stress? 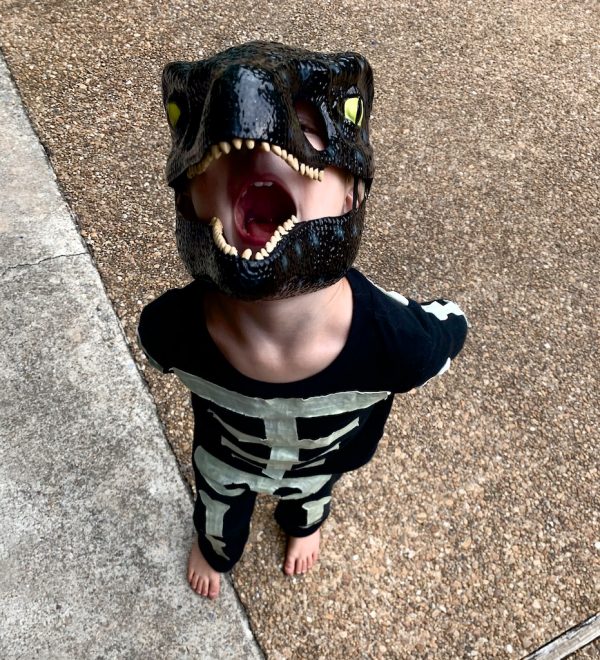 Since David outgrew this skeleton costume, I’d been saving it for Thomas. He wasn’t game last year, but was excited this year. Then out of the blue he asked to be a Komodo Dragon. A KOMODO DRAGON — of all things! The idea was quintessentially Thomas, so we went to Target and found this perfect mask. He wore the mask every single day until the party, then he decided it wasn’t comfortable.

Perhaps I got burned (literally!) by the complexity of this particular costume. An easier costume that David could help with, or we could make with things we already own would change the narrative.

Or maybe it’s this stage of life? Maybe when I have four kids that are all in school and I can spend the day crafting alone in front of the TV it’ll be a more cheerful undertaking.

Or maybe this is one of the many things that I’ll look back on fondly. With time, the stress of the week will fade and I’ll be left with these hilarious pictures of David in a foam block head.

One that his mom made, just for him. 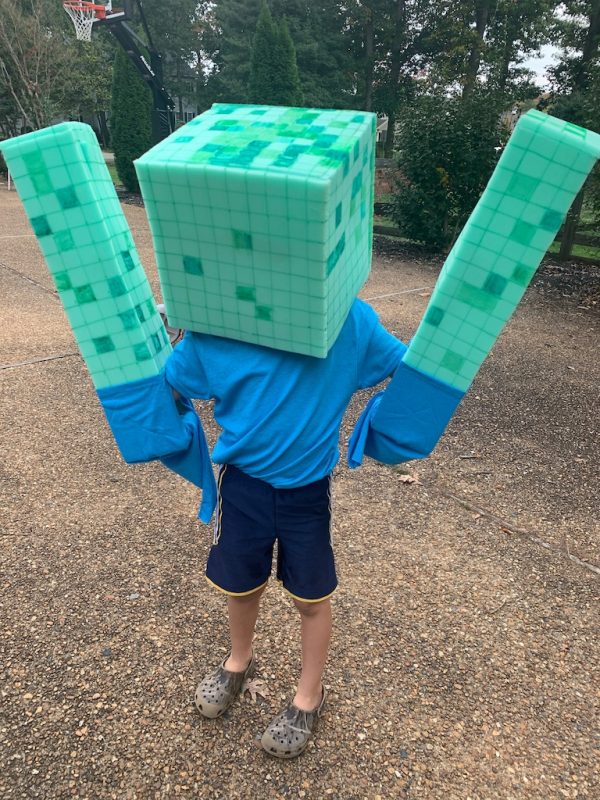 Other homemade Halloween costumes through the years:

Mary seems to always dress in something she already owns with costume pieces added in, a witch, butterfly, Cinderella, a ballerina. 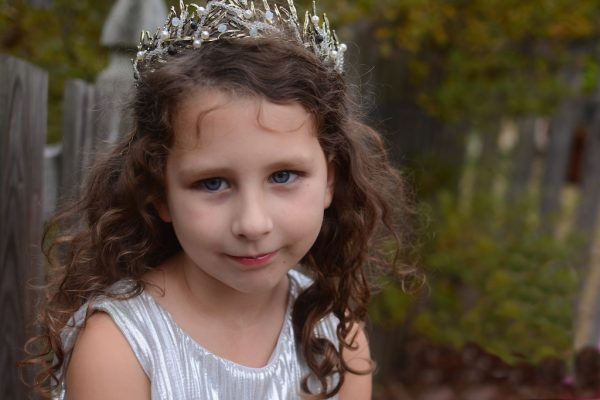 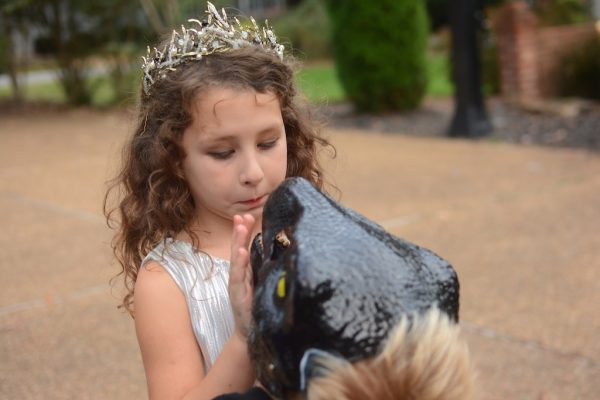 How do you Halloween?

And what are the things that you put extra time (or money!) into for your kids?