Next fall Thomas will start kindergarten.

This fall he is conducting experiments in our yard with the garden hose. 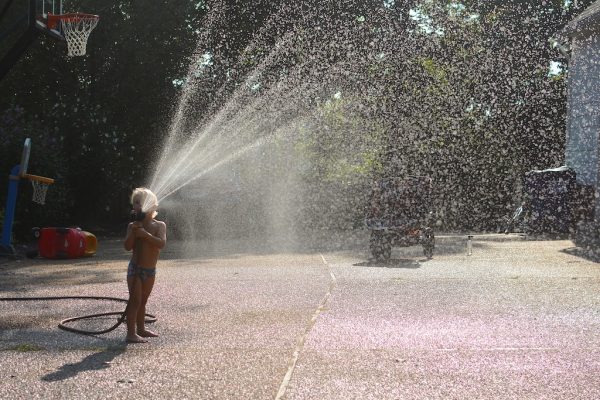 One afternoon I was watering the garden and Thomas started digging in our mulch. I was using the hose attached to our irrigation, so he got the hose that’s attached to the front of our house and dragged it out to the sidewalk.

I watched him quietly, and for half a second I considered telling him he couldn’t dig up the mulch. After all, this is our front yard, and you only get one chance to make a first impression to literally every single person who drives into our neighborhood. 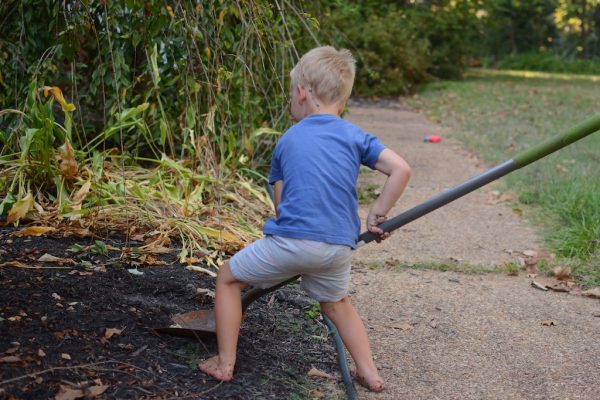 I considered it, but I didn’t say anything because it’s only mulch, people. Also, the mess I’d have to clean up after telling him he couldn’t play would be much bigger than any mulch and water mess. (Picture kicking, screaming, huffing and puffing and blowing the house down.)

He played, I watered, and eventually he asked me to come see what he made.

He had buried the hose under a pile of mulch so that when he turned it on, water  spewed out of the mulch mountain. He made a volcano. 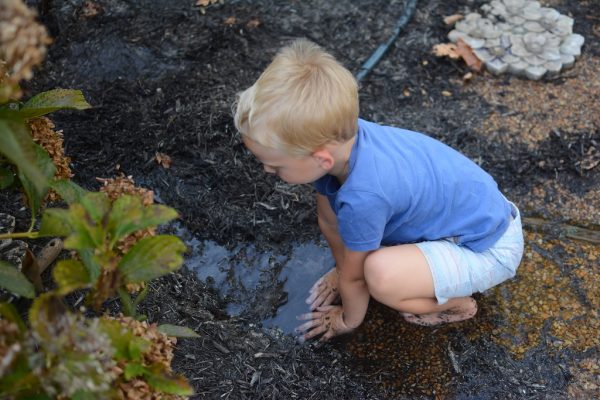 Rivers of hose lava flowed down the mulch mountain (which was no match for the force of the water), so he was making what he called “gates” to stop the flow of the lava.

I stood back and marveled at my genius child.

Later that evening when the kids were in bed, I opened Facebook. One of my friends had posted a video of her three-year old counting to 20. In two different languages.

Because I am a middle child and naturally defensive, I furrowed my brows and rolled my eyes because can you even? By the time I showed it to Tom my actual emotion had surfaced, I felt worried. Judged. My 4-year old made a mulch volcano and that 3-year old is translating documents for the U.N. Obviously, I’m doing something wrong. 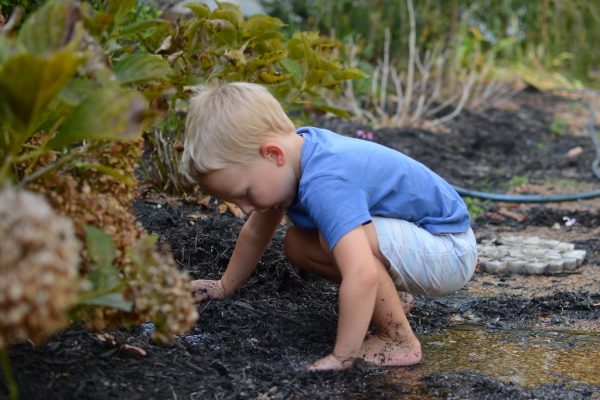 I don’t worry myself too much with formal academic stuff with my little ones (is that even such a thing) because it doesn’t come naturally to me, and I know enough to know that  forcing things never works.

For me, what comes naturally is allowing for unstructured, open-ended play. I’ve read over and over that play is enough until they’re at least five. In fact, play offers rich, unique learning opportunities that worksheets and flashcards can’t provide.

Even my second grader’s teacher encouraged us to free up the kids’ schedules so they have time to just play. 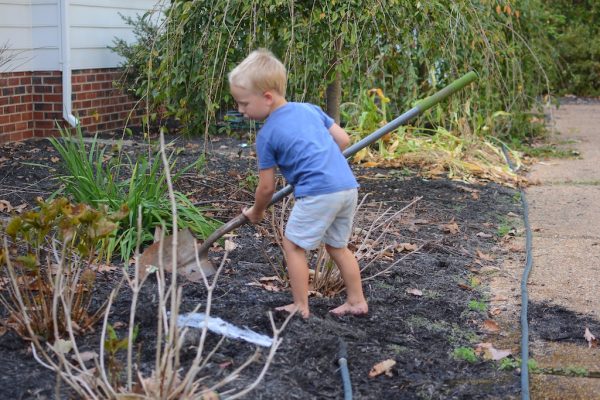 Messy, experimental play works well for me and is supported by experts, and I feel confident about the low-screen, play-focused environment we’ve created. But with kindergarten looming I can’t help but wonder — is he ready? How does all this “play” translate to the classroom? Will he be the only kid in class that can’t recite the alphabet backwards? Or, ahem, forwards.

Then handouts from the school system enumerate skills and facts that would be helpful for incoming kindergarteners.

Excuse me? Where’s the line-item that says: “Has the ability to construct a volcano in his mother’s flower bed.” 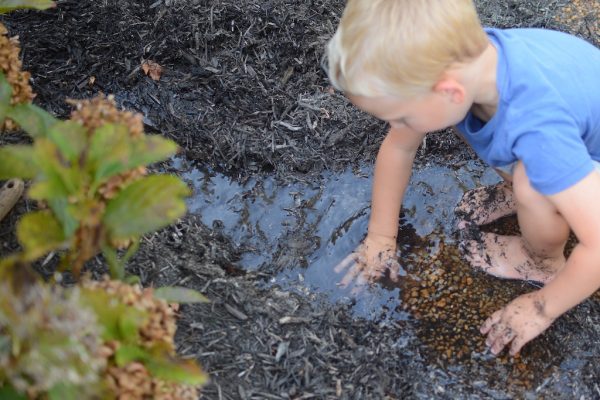 With the countdown to actual academics looming, I’ve started looking left and right  (there is an actual Bible verse warning against doing this) and comparing Thomas to other kids his age.

Before you tell me to delete Facebook, don’t worry! I can compare just fine without social media! I side-eye art projects on friends’ refrigerators. I ask leading questions. I look back on my own blog and compare him to his siblings.

The problem isn’t Thomas’s aptitude. It’s that I can’t remember the last time I saw him holding a pencil. He’s not interested in coloring, puzzles, or learning the correct names of colors because he’s too busy building volcanoes.

He is a master at creativity, imagination, and open-ended play. He loves sensory play, and he gets absorbed in things like digging and building with the same passion as he does quietly observing  a caterpillar climbing through tall stalks of grass.

Thomas is learning valuable things when he’s playing — independence, creativity, patience, self-regulation. I might even argue that his volcano was a lesson in erosion, not to mention physics, science, and landscape architecture.

But next fall when Thomas starts kindergarten, I can’t shake that nagging concern that his transition will be harder because his mother hasn’t done more, you know, school stuff with him. 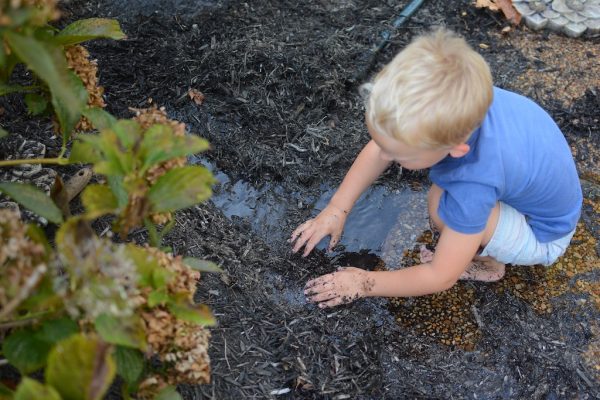 There is also the very real possibility that this is just emotion veiled in worry. Thomas is starting kindergarten. My third baby, off to school. This is going by so fast.

Almost every single day the thought creeps into my head “I should work on letters…I should encourage him to color…” Then I catch a glimpse of my little boy splashing in a puddle, hands and feet covered in dirt, lost in the boundless possibilities of dirt and water.

He is hard at work imagining, playing, learning — his eyes and mind wide-open to the world around him. This is what comes most naturally to him. As if I could possibly enhance the value of what he has created. 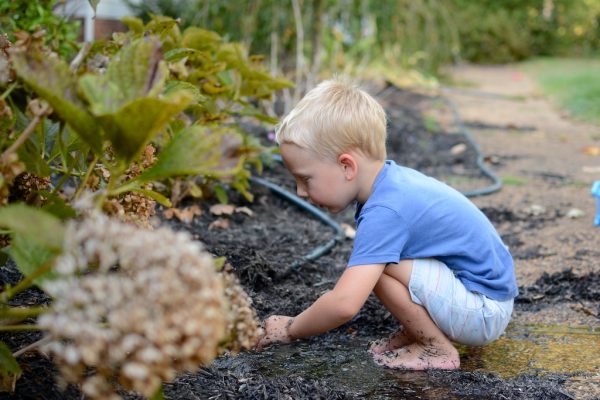