We’re going to be the school-via-the-Internet camp. I considered homeschooling my kids for one brief moment, then thought better of it. There are myriad reasons why I’m not homeschooling. Near the top of that list is that, turns out, my kids have absolutely zero respect for their teacher-mommy.

We’re all sitting on the couch when David starts squeezing my arm.
Me: David, what are you doing?
David: I was just seeing if your arm was rippling because of muscles or because of fat. Turns out it’s —
Me: Stop. Just stop right there.

I try to do is ask the kids simple math questions throughout the day to try to review their math skills. Stuff like, if we have four kids and eight pieces of pizza, how many pieces does everyone get? Stuff like that.

Mary answered, “Don’t worry, Mom. I can run upstairs and ask Daddy for you.”

While I was watching the kids swim one afternoon, Thomas swam over and asked me:

Thomas: Mom, what kind of animal eats the most food?
Me, considering for a while. Is it the elephant? Some energy-hungry carnivore? Perhaps an insect I haven’t thought about? Then I come up with the most educated response I can think of without Googling: I think it’s the blue whale, Thomas.
Thomas: Nope. It’s Garfield.

My sister gave this book to Anna on our trip to Vancouver. We were reading it one morning, and as we read through it, she asked me what the animals say. The animals aren’t your typical barnyard animals (there’s an orca, red herring eggs, and sea otter, for example) so I have to get creative. 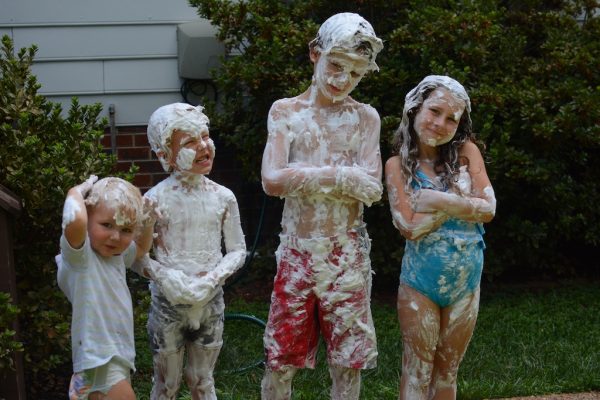