Our family had a great Halloween, but as I sit typing this my eyelids are heavy and I’m feeling judged by the spooky decorations that became unseasonable 12 hours ago.

I’m already feeling the busyness of the holidays and taking it as a reminder to try to slow down and enjoy the season. Perhaps this season we’ll play hooky once in a while, and when I don’t have time, I’ll buy cookies from the store instead of staying up late baking.

As I was saying! We had a great Halloween. I am very, very aware that these are the days.  As our kids are getting older, tramping through the neighborhood is more doable and more fun. All of my kids love Halloween, and they don’t even question their lame mom tagging along trick-or-treating with them. 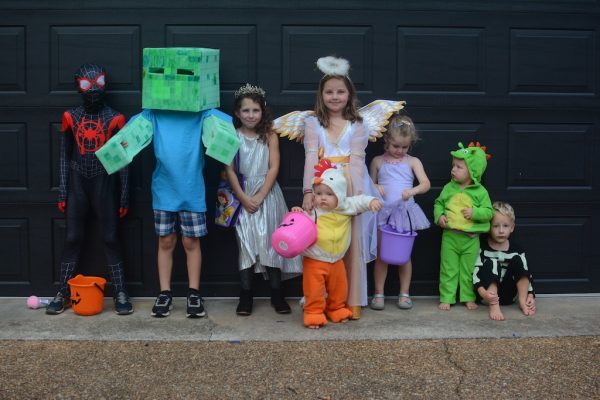 All week I was watching the weather as we made Halloween plans, and the forecast started to look foreboding. Like the rest of the moms east coast, I spent all day on Halloween refreshing my Weather app. When would the rain start? What about the high winds? When surrounding counties were placed under a tornado watch I wondered if the weather was really that bad or if maybe a few toddlers had just heard that trick-or-treating would be cut short this year. A tantrum has registered on the richter scale for less.

My kids get home from the bus around 4:30 p.m., and right around then, when half of my brain was occupied by the weird hot-humid-windy weather outside, Thomas curled into a ball and told me his stomach hurt.

I told him to go to the bathroom and tried to pretend that I wasn’t already calculating how long it would take for all six of us to work through the stomach bug. (For the curious, the answer is that we’d be well by July 4, 2023.)

Our cousins arrived, and I assumed Thomas would perk up, but he didn’t.

Mimi arrived and passed out candy. I assumed he’d perk up, but he didn’t.

We threw some corndogs and carrot sticks at the kids, then headed out to join a bunch of neighborhood families at a memory care facility to trick-or-treat. All the while, Thomas slumped in the stroller and intermittently complained that his stomach hurt.

That’s when Tom carried Thomas home, and I started imagining a Haunted House for Moms.

One room would be filled with babies holding Sharpies. One room would be pitch dark with Legos all over the floor. A mountain of laundry. A never-ending snow day. Daylight Savings Time. And the finale? A kid saying, “Mommy, my stomach hurts.” 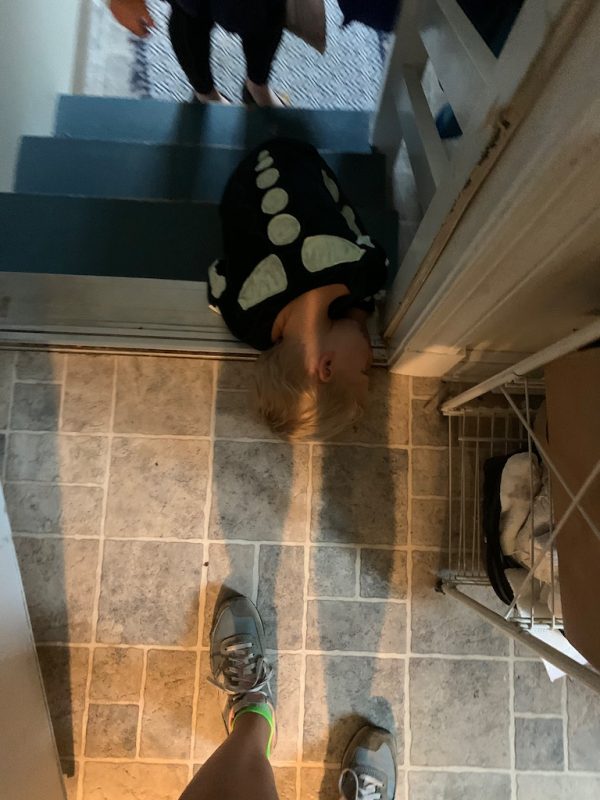 The rest of the night felt exactly what Halloween looks like in the movies — kids running from house to house, neighbors with full-sized candy bars, toddlers waddling around in ladybug costumes.

For so many years we had to walk the kids up to each door. This year the adults mostly watched from the side of the road and yelled, “Don’t forget to say ‘Trick or treat! DON’T FORGET TO SAY THANK YOU!!!”

Anna was so confused but also so excited to be with the big kids. She didn’t go up to many doors (she didn’t get that particular piece of the puzzle) but she did walk the entire time while I pushed an empty stroller. Well, not exactly empty, it had David’s discarded costume.

I could tell that not as many people were out (I’m assuming the weather scared people off), and we called it a night at 7:30.

The storm didn’t truly hit until later in the night. When we lost power I started imagining having the stomach bug and no electricity (which would be maybe even too scary  for a haunted house).

But our power came back on, and Thomas never threw up.

In fact, when I woke up the three big kids were awake and sneaking candy in their room. Because Thomas didn’t trick-or-treat, Mary and David shared their candy with him. I didn’t even have to ask them to.

It was a very happy Halloween.

And now, since neither of us had the stomach for it last night, Thomas and I are eating candy for lunch.

Ooops, looks like I’ve already  used the “a sick kid is the most terrifying thing” joke. Whoops. Maybe if the kids would stop getting sick then I wouldn’t be forced to reuse material!?