This Christmas season has felt more hectic than any other I can remember. I’ve been thinking a lot about what I could do differently to remove some stress, and I’ve come to the conclusion that no matter what I do, it will be hectic.

Of course, I’m the first to admit that I could use a time-management overhaul, and a chore chart wouldn’t kill me, but I truly believe that when you have four kids (or three! or two! or one!) things are just always going to be a little crazy behind the scenes. And in front of them.

Let’s be realistic. The amount of gymnastics, rhetoric, threats, and luck it takes to achieve dinner and bedtime at my house on a NORMAL day is dizzying. So why do we assume that adding things like decorating cookies, or dragging a tree into our living room will create space to slow down, eh? Enjoy the season, eh?

The idea to simplify simplify simplify is wonderful on so many levels, but it can also be just one more thing to feel guilty about. I’m stressed, ok? Add that to the list of things I’m doing wrong this season.

It’s also important to note that this year we’ve had more on our calendar than ever before. All of our kids have their own parties and performances, and in addition to that I’ve found myself saying “yes” a lot more.

I know you’re reading this and feeling the urge to put your hand on my shoulder and direct me to the previous two paragraphs that I typed in a flurry of stress. (Dear Amanda, Yes = Stress!) But I promise, every single “yes” has been intentional. Even though I don’t have time, I want to send Christmas cards. Even though it destroys my kitchen, I want to make homemade cinnamon bread. We’ll dress in unnecessarily festive dresses for the second grade Christmas play, and Mary and I will have matching sparkle nail polish. Maybe it means our house is a little messy on the way out the door. In my economy, sparkle nail polish is more important than a tidiness.

One week Tom’s parents invited us to their neighborhood to see Santa. The local fire department would drive down the street with Santa, and the kids would get to see him and  get a candy cane. We had a busy week, but we said yes.

When the day rolled around, it happened to be really cold and really rainy. Tom was at basketball practice with David, so I’d was solo with the three little kids. Driving there, my windshield wipers were on full-speed and a huge, huge part of me hoped it would be cancelled.

Tom’s parents filled their kitchen island with food and welcomed us in out of the rain. Again, I assumed everyone had forgotten about this Santa nonsense. The kids were with their cousins, they were happy. There’s no reason to rock this boat.

Then Tom’s mom looked out the window and announced, “SANTA IS COMING!”

Perhaps this is what I should start shouting when it’s time to go to the bus stop, because within SECONDS my kids were scurrying for their coats and shoes.

Grinch that I am, I wasn’t planning to go outside. Tom’s mom was with them, and besides, someone needed to stay with Anna.

But then Thomas ran out of the house without shoes, so I had no choice. I threw on my coat and ran after Thomas, just in time to see a line of firetrucks coming down the street.

We all stood at the end of the driveway, breathless from the rush but also from excitement. The kids didn’t notice the rain; their eyes were fixed on the trucks that had stopped at the neighbor’s house.

There was a whole line of fire trucks and vehicles, all with their lights blaring. To me, a cynical adult, it looked more like a traffic accident than the arrival of Santa Claus.

But as the fire truck pulled up to our driveway, I looked down at Thomas and he was overtaken with excitement. His eyes were wide and he was frozen in place, looking at Santa sitting high in the fire truck. I looked over at Mary, and she was the same. Wide eyes. Unmoving.

It occurred to me in that moment, they think they are actually seeing Santa Claus right now. 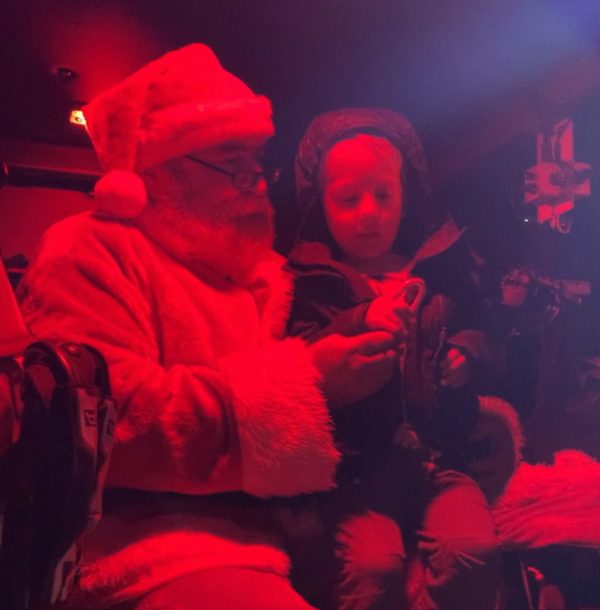 Like the real  Santa Claus who lives in the North Pole and uses magic to bring them toys on Christmas night.

I never thought I’d say that I didn’t mind standing outside on a cold, dark, rainy December evening, but I truly didn’t mind at all.

Mary and Thomas visited Santa and got a candy cane. When Santa and his fire truck parade drove away to the next house, we ran inside. 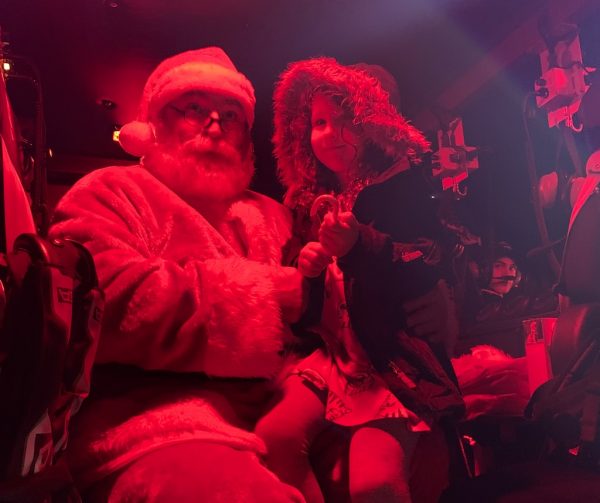 We shook off our rainy coats and the kids ran off with their cousins, debating whether or not he was the “real” Santa or if he was just a helper.

I listened to their chatter and kept thinking back to Mary’s bright eyes. Then I thought about how I almost didn’t run outside with them — I almost chose warm and dry inside instead of Christmas magic outside.

That one moment put the whole season into perspective for me. The problem with the holidays isn’t the mess, stress, and exhaustion that comes with the season. The problem is how you let it effect you. That’s my problem, anyway.

This year my oldest child is 8, and that there is a unique joy that comes with being surrounded by kids at Christmastime. I know that I only have so many years of this left. And so I’m writing this as a reminder to myself to enjoy it while it lasts — to lean into the things that make our eyes light up and our hearts warm. 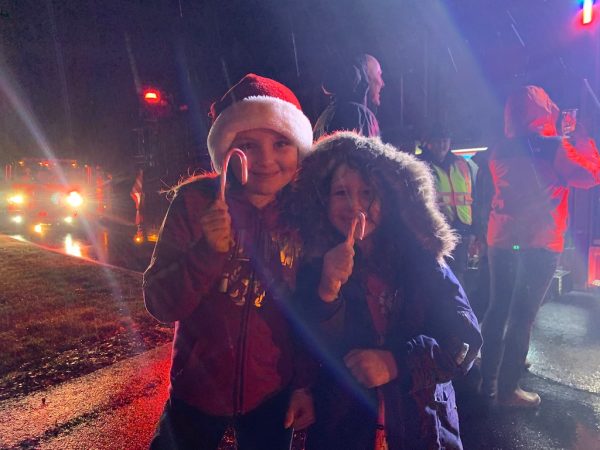