Playing Santa is, without a doubt, one of the most fun gigs I’ve ever had.

Shopping, wrapping, imagining the joy when they open the gift. It is all so very wonderful.

Sometime in November, Tom’s mom, Peggy, called me from Costco. She was shopping, and there was one MaryEllen American Girl doll left. Should she get it? The Costco bundle included the doll, her accessories, an outfit, and the book. It was a great deal.

Tom and I hadn’t decided if we were going to get MaryEllen this year. Mary had been asking, nay! Begging! For her. But we weren’t sure if she was ready for such a nice gift. Most of her toys are shoved into baskets and bins and missing parts. I couldn’t handle that happening to MaryEllen.

But with Tom’s mom on the phone, just one doll left at the store, I had to make a decision.

I held my breath and made a decision.

Peggy hung up, and I smiled; Santa’s work was done.

Five seconds later Peggy called back. “Someone took her. While I was on the phone with you. Someone came and took her.”

I was disappointed, but not dismayed.

Then my phone rang. It was Peggy.

“Amanda. She gave me MaryEllen. The woman who took her told me that her daughter didn’t really care about her, and I should have it for my granddaughter.”

I couldn’t believe it. In under five minutes we had MaryEllen, then we lost her, then we had her again. This woman’s generosity moved me to tears.

A few weeks later we got MaryEllen from Peggy, and because I’m SO EXCITED about her, as soon as we put the kids to bed I unboxed her, and I could immediately tell that the box had been rifled through. The doll was fine, but everything else was gone. Someone had stolen all of the extras.

Our Christmas miracle gift had been SHOPLIFTED!!!

The next day Tom took MaryEllen back to Costco to exchange her. They could give us a refund, they said, but they were all out of stock. No MaryEllen.

But this would not do! Because it was Christmas! And because at this point we were so very invested in this “meant to be” gift.

Tom stood at the customer service counter while the kind associate called every Costco in the area to find a MaryEllen doll.

There was just one left.

Tom drove across town. When he got to The Costco, he had to show an I.D. to the customer service employee. After an entire morning of calling, driving, frantic texting, and fretting, MaryEllen was ours. 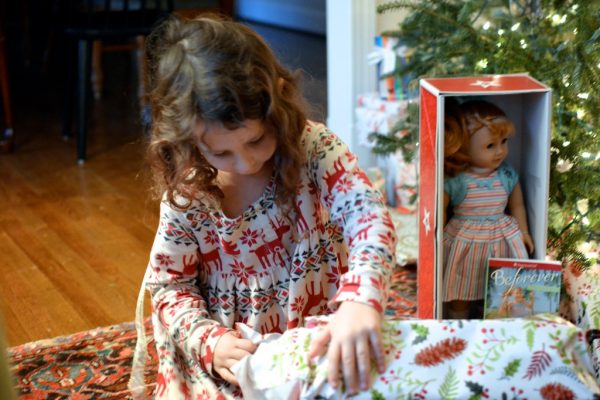 And the hilarious thing about playing Santa is that on Christmas morning, we didn’t say a word. Mary was delighted to find MaryEllen under the tree.

We sat and sipped our coffee and watched her hold MaryEllen and smiled thinking about all of the work that goes into Christmas morning. The lists, the shopping, the stashing gifts in the attic and the trunk to keep them from curious eyes. They are wrapped and placed under the tree and when the kids run downstairs it all looks so effortless.