So as I was saying, when our cat was an adolescent he spent all day being cute and all night demolishing our house.

We were living in a house with a basement, and after waking up to find that Brigham had gotten a bag of bread off the top of the refrigerator, ripped it open, and decorated our entire downstairs with slices of bread, Tom suggested we lock him in the basement at night.

I was shocked and horrified to find that I had married a monster. Lock the CAT??? IN THE BASEMENT!?!??! I refused. After all, Brigham was our first baby.

The next night Brigham got several balls of yarn, rolled them down the hall and down the stairs, and by the time we woke up our dining room looked like that Catherine Zeta-Jones’s laser maze in Entrapment.

Brigham spent the next night in the basement.

Fast forward 10 years and now Brigham is a middle-aged grumpy man. If a magical fairy gifted him the ability to speak just one sentence, I know beyond a shadow of a doubt that that sentence would be, “Can someone please lock these kids in the basement?

Early this week I came home from a morning run to this scene.

Part of me is annoyed. The other part is surprised it took this long. 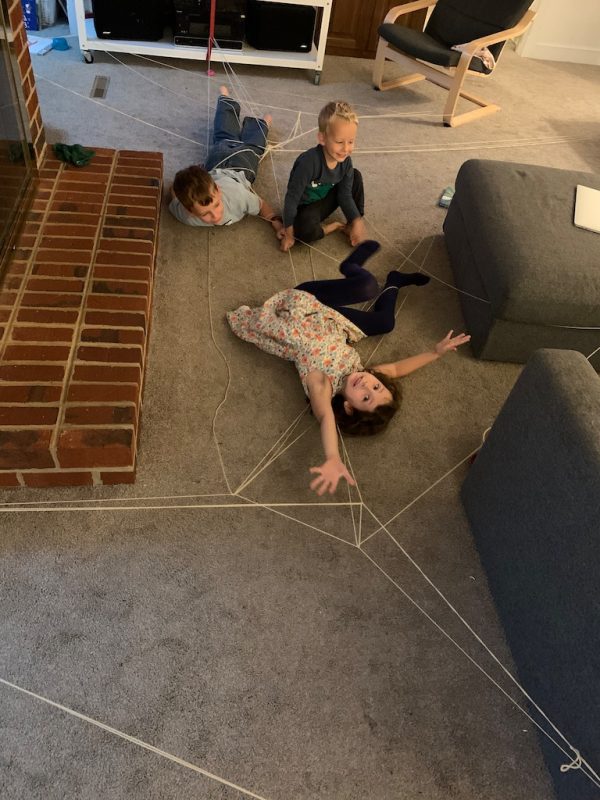 Thomas was the brains behind the whole operation (of course). He found the yarn and started making a spider web. David upped the ante by tossing it up on the fan and wrapping it through the house.

Then David shouted, “Put this on your blog!”

I snapped a few pictures with my phone and here ya go — if you’re still looking for Halloween decorating ideas, look no more! 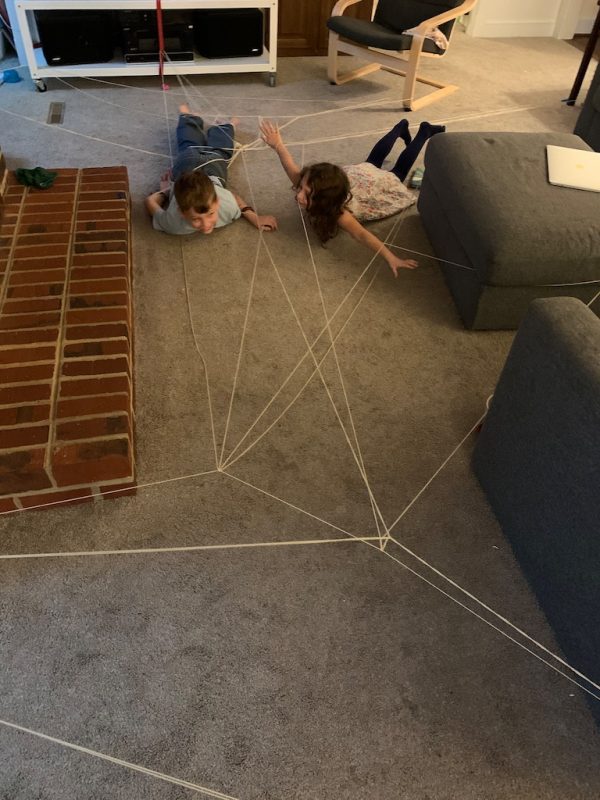 The real problem with this decor idea is that you can’t walk through your house. Minor detail. Especially if you’re almost two-years old. It took me 30 seconds to declare the spiderweb a hazard.

After taking the kids to the bus stop, Thomas cut the yarn (scissors practice!) and we painstakingly picked it up the strands. 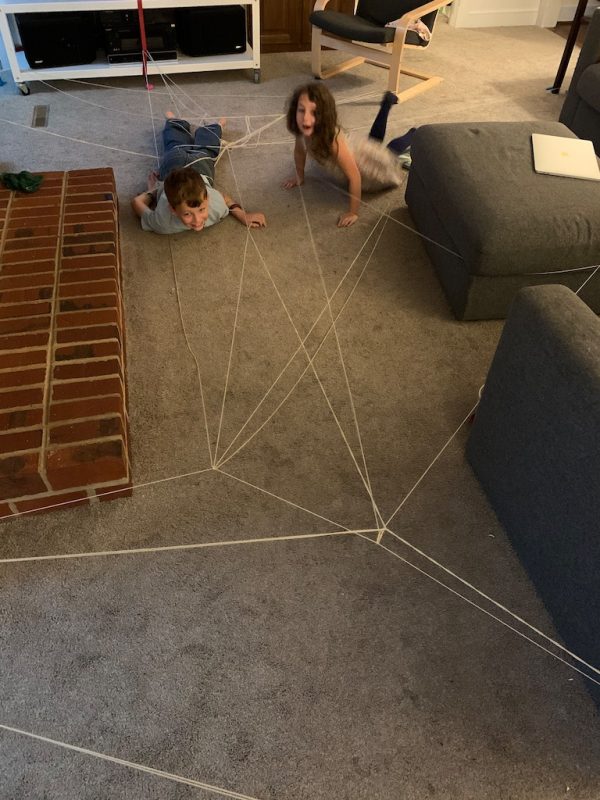 Once the yarn was put away, David’s request stuck with me — “Put this on your blog!”

My kids don’t understand social media or really the Internet, but they know I have a blog. They have an idea that when I take photos, sometimes other people see them. “Don’t send it!” Mary will chide me when I take a picture of her in an outfit she doesn’t like.

Later in the day my friend Sarah, who also has a blog and shares lots of funny stories and encouragement about motherhood, posted something that her kids told her to “Put on the blog!”

Like Sarah, I’m also going to take this as an opportunity to re-state my “ground rules” for sharing stuff online, especially with my big kids. My kids know I have a blog, they read my blog (they think it’s boring), and they have veto power (Tom too!) when it comes to content. If they don’t want their picture taken, I don’t take it. (Except when they’re just being contrary. There’s a difference between “I don’t want to be on display” and “I don’t want to stand here simply because you’re asking me to.”)

I used to write my blog and, to help establish boundaries, I’d  imagine certain friends reading it. Now, I imagine my kids reading over my shoulder. What would they think if they read what I was writing? Would they be embarrassed? Would they feel exposed? I know I’ve made bungles along the way (and will continue to), but my hope is to mostly document our family as it grows, and write honestly about my experience figuring out parenting, instead of making jokes about my kids as they figure out childhood. There’s an important distinction.

I want my kids to love that I’ve written and documented so much, and as they get older, they get more and more of a say. So when they exclaim, “Put this on your blog!” Well, then, I’d better listen.

Psssst…do yourself a favor and check out Sarah’s blog Christ in the Clutter. And expect to see lots of links to it in the future; it’s so great.