At Anna’s 15-month well-visit last week, the nurse let me know that my happy, smiling, gurgling baby had a low grade fever. Um, excuse me, what? 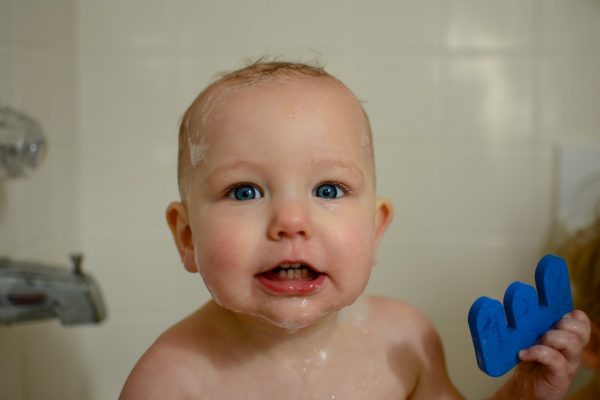 I actually wasn’t completely surprised by the ear infections. Right when she turned 15 months Anna and Thomas both came down with RSV. I knew I needed to write her update, but all I could come up with were dramatic images of me rocking her all night, holding her all day, stroking her feverish forehead, and imagining the giant statue that would be erected in my honor as The Most Sacrificial Mother That There Ever Was.

I’m glad I exhibited a bit of self-restraint (FOR ONCE) because aside from that one pesky week of 103 fevers and no sleep? Well, it was a great month. 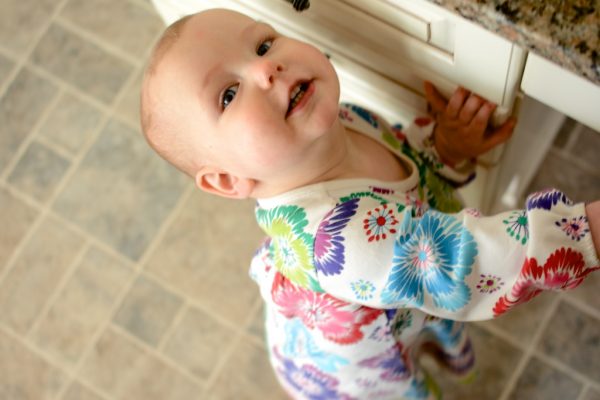 All of my children, have had some sort of scrape or shiner on their face at 15 months. Anna’s came in the form of some rug burn on her eyebrow, and I’m hoping that’s the extent of this milestone for her. The coincidence, I decided, isn’t a coincidence at all. Instead, it’s a side effect of month 15, the month when your baby steps (tumbles?) into the toddler phase. They run headfirst (literally!) into all things toddler. All that destruction they were doing before? That was for babies. It’s toddler time, and if that means bodily harm then SO BE IT! 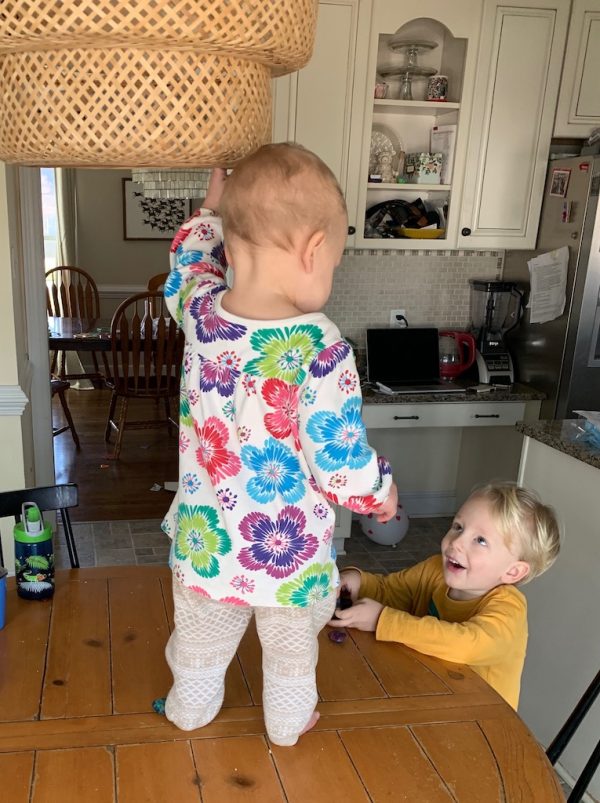 Anna has learned to climb on tables and chairs, a development that honestly has me longing for the days when she was so interested in the stairs.

She is obsessed with the table because guess what we put on the table? All the things Anna isn’t supposed to touch! Cups of milk, bowls of soup, vases of flowers, David’s homework — it all lives on the table. Imagine walking into a room to find your 15-month old standing on the table, holding your DSLR. You want to tackle her, but you also don’t want to startle her and cause her to drop your very, very expensive camera. So you smile, tiptoe and hold eye contact, whispering, “Don’t make any sudden movements and no one will get hurt.” 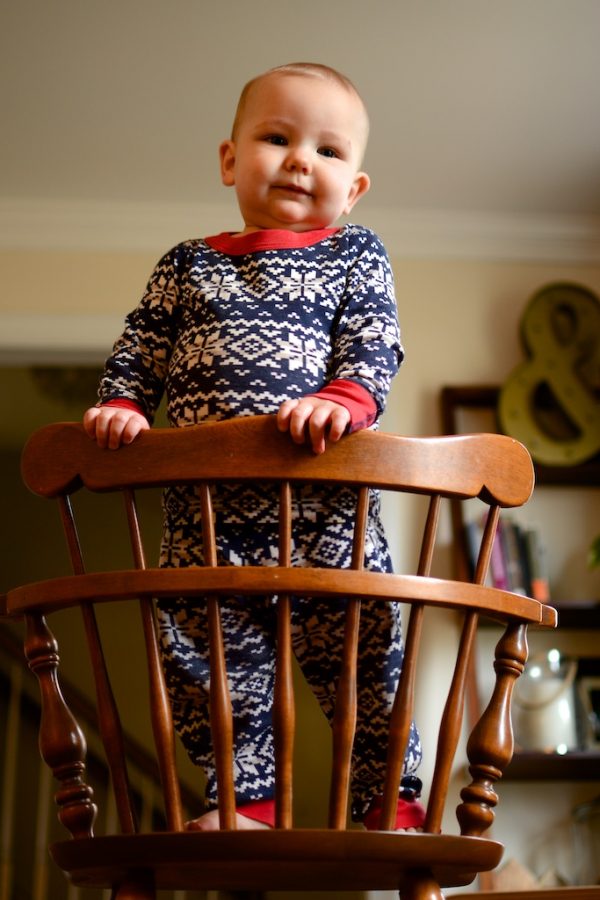 As if climbing and getting into mischief isn’t enough, Anna has mastered the word “no.” But she doesn’t just say it, she says it wagging her head and sweeping her hand in front of her, “Nah, nah, nah, nah!” She says it no matter what we’re doing, even when she hasn’t been asked, even when she means yes.

It’s very sweet, and the entire family loves asking her questions just to get her to say no. She beams when we respond, so proud of herself. When she turns three we’re really going to regret all this encouragement.

She babbles all the time, and occasionally says Mama or Dada. She’s also proficient with the word “ow.”

Mary asked me one afternoon when Anna was going to start talking. Not just baby talk but real talking. Honestly, she’s the youngest of four kids, she doesn’t need to say anything besides “no” and “ow.” 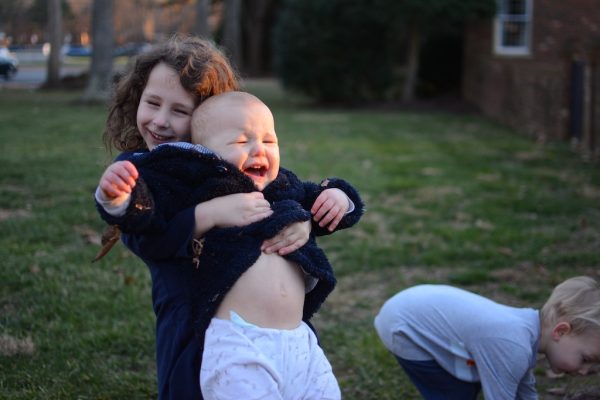 Anna is also playing differently. She likes to race cars down our tracks, and will climb on the table (of course) and pick up a crayon to copy her sister.

It’s very clear to me that some sort of development switch has been flipped, because she’s showing a different awareness and abilities than she was even a month before. We’ve never spoon-fed her, but now she likes to hold a fork when she eats. She holds her legs out when I’m putting pants on her, and when I show her a diaper she very dramatically finds a place on the floor and lays down. SOMETIMES. Other times she screams and flops and diaper-changing is a full-on WWE event. 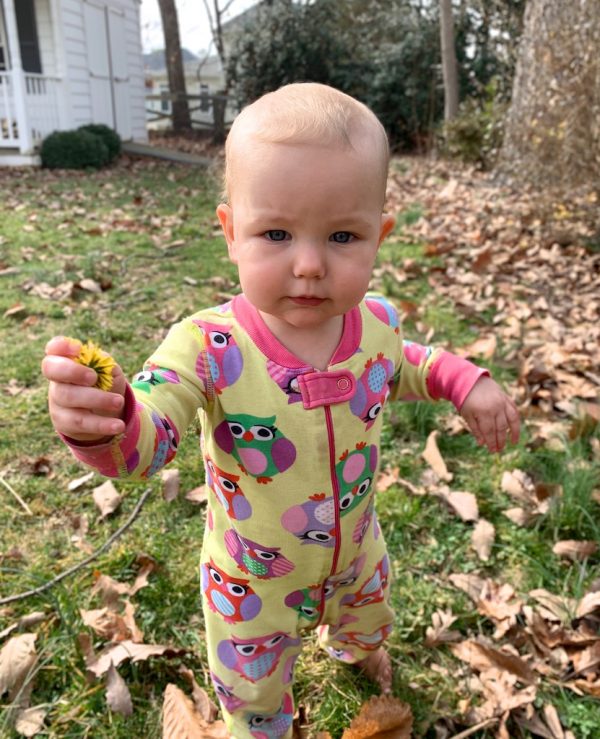 My favorite part of this month, the part I want to remember, is how much Anna loved playing outside. If it was possible to make me long for warm, sunny days more than I already do, watching Anna play outside did just that.

It is so, so easy to be a mom when your kids are outside. They can climb, jump, shout, and you don’t have to tell them no! Stop! Too loud! Too wild!

On that note, it’s a lot easier to be a toddler outside, too. 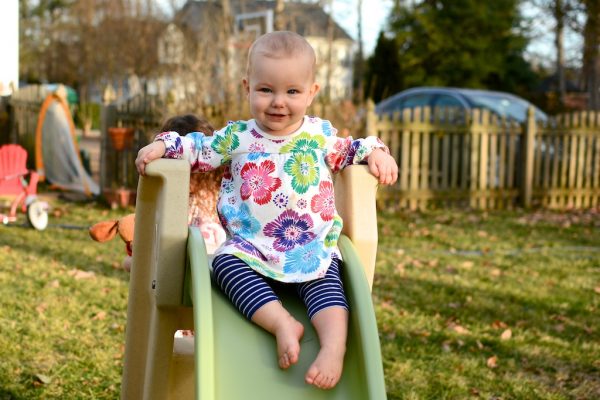 I’ve written over 90 of these updates for my kids; two years of monthly updates for each of them plus annual updates. In that time, I’ve noticed a pattern. At first there’s a lot to say, but then there’s a lull where not much seems to happen. Then we get to fifteen months, and things start changing so fast that I realize I can’t keep up, even with a blog dedicated to documenting every single smile and fever.

Anna is doing new things every day, all the time. I have done this four times, and I’m here to tell you it doesn’t get old. It is a delight and surprise each time she learns something new. Nothing makes our entire family stop and smile like Anna trying to build with blocks for the first time, or mumbling a new word. We are all so proud, so amazed.

It’s why we keep these crazy toddlers around. 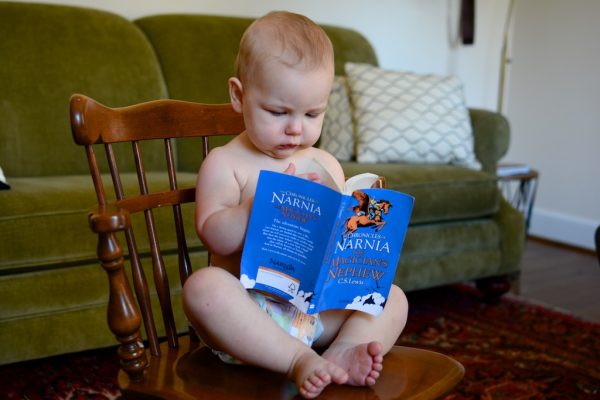 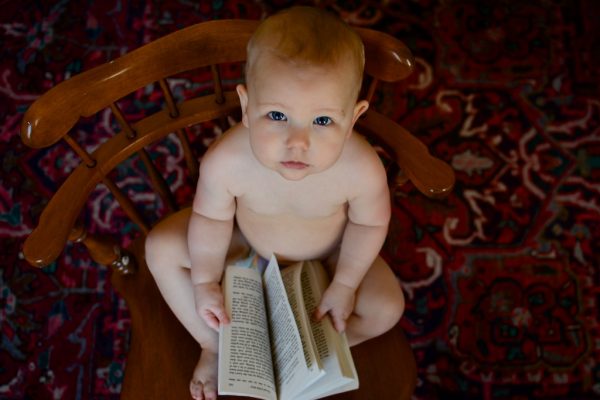 I haven’t mentioned your sleep habits yet, so here I go. Every time we seem to make some progress, something happens. You start to cut two or three or twelve molars, or you get a bad virus. Either way, we get derailed and start back at square one. This month, you and I spent a lot of time together between the hours of 11 p.m. and 6 a.m.

Perhaps it is just as simple as letting you cry and figure out the night on your own, maybe that’s all I need to do to get a solid night of sleep. Perhaps. But as much as I’d like to sleep through the night, when you do cry, I go to you. I gather you from your crib with a kiss, and pull a blanket over us. When it’s just the two of us, warm under a blanket, and I’m nursing and rocking you in the quiet of the night, I know why you like this so much.