It’s mid-July, and right on schedule we have homegrown tomatoes, cucumbers, and peppers from our garden.

We didn’t plant much this year. We have a small space for our garden, but more importantly, I was trying to be realistic (for once) about my ability to maintain a garden. I tried to be really thoughtful about what I planted and what we would actually eat. (Usually I’m so optimistic in the spring that I plant way too much and figure it’ll all work out.)

Our highly-selective garden, I planted four cucumber plants. That’s a lot of cucumber for a girl who “didn’t plant much.” But I wanted to a lot of cucumbers this summer, because when they’re prepared like this I can eat six in one sitting. This is easy, healthy, and you don’t even have to turn on the stove; an all-around winner for sure. 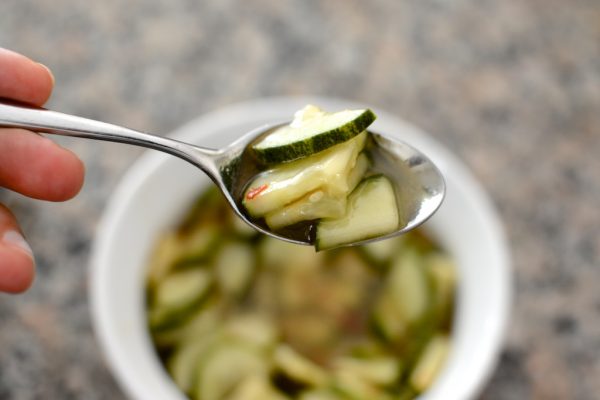 I call these Asian cucumbers, but maybe there’s a better name. The flavors are Asian, and the process resembles recipes for refrigerator pickles. Try them, see what you think.

Start with a pile of cucumbers, chopped into bite-size pieces. Peel them if you prefer, but it’s not necessary. And here’s my obligatory reminder to always practice safe cutting practices. 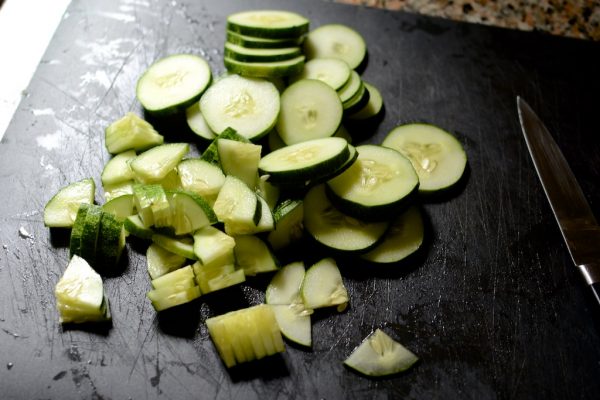 Once you’ve sliced and diced your cukes, drizzle them with rice vinegar and sesame oil. I like a 2:1 vinegar to oil ratio, but you can alter it to your tastebuds. When I first started making it I used a 1:1 ratio, then decided I like a stronger vinegar flavor. You’re the boss, don’t think about it too much and do what you want.

This recipe is easily doubled or tripled; my rule of thumb is to add at least two tablespoons of vinegar and one tablespoon of oil per cucumber. 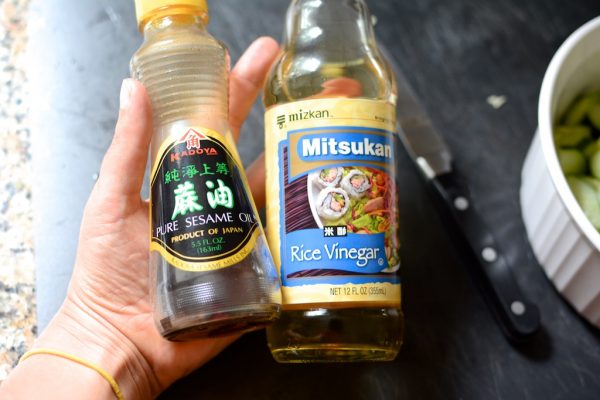 If you’re not familiar with sesame oil, this is where the Asian flavors come from. It has a pretty distinctive flavor that I really love.

Add some salt, and if you like a little spice, sprinkle your cucumbers with some crushed red pepper. 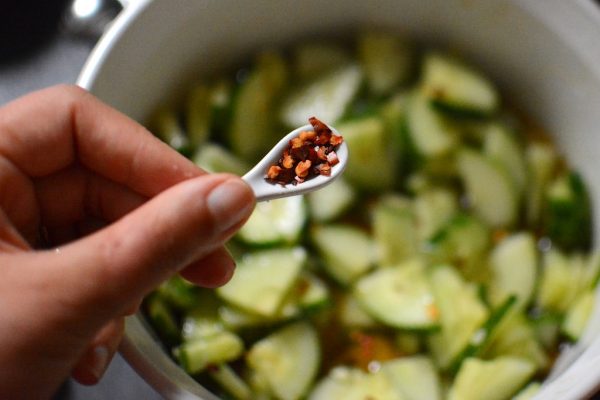 Once they’re done, they’ll look like this, most of the dressing is at the bottom. The cucumbers won’t be totally submerged, but each piece should at least touch the mixture.

Give it a good stir and put it in the fridge. They’ll be ready after an hour, but will keep for a week or so. 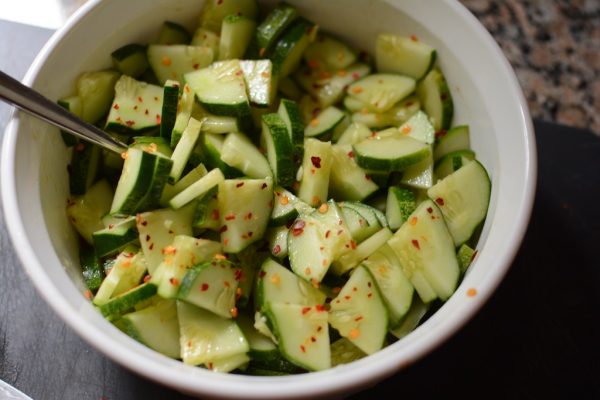 This is what they look like after a few days (and after they’ve been transferred to a smaller dish because I ate half of them). 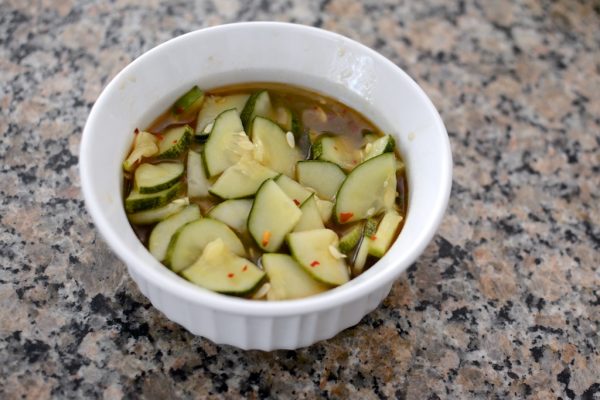 If you really like spicy, substitute the sesame oil for chili sesame oil. It has a good kick but, it’s not going to make you sweat, know what I mean? If you like spicy, you’ll like this. 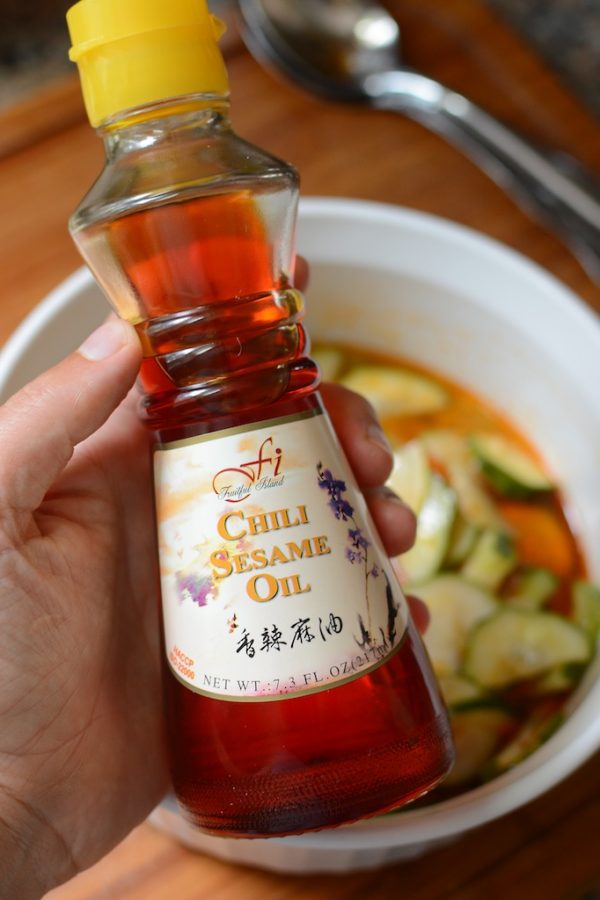 The chili sesame oil has a reddish tint, so your cucumbers will look like this if you use it: 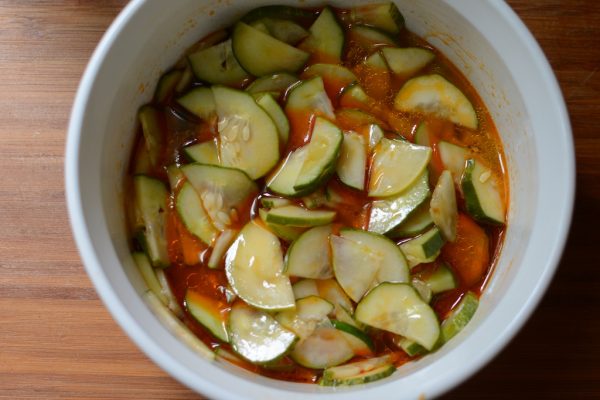 Put chopped cucumbers in a dish (use a flat-bottomed dish so the cucumbers can spread out and will be more evenly distributed in the oil and vinegar.)
Sprinkle with salt and crushed red pepper.
Refrigerate for at least an hour, up to a week.

** All ingredient measurements can be altered to taste.

From the garden is a continuation of a series of garden recipes I started back in 2012. If you’re looking to use up a bunch of produce from your garden, try out some of my favorite recipes: