Last month, when Anna turned 16 months, I decided I’d skip her monthly update. She had just broken her arm (somewhere, Mary Virginia is correcting me, “IT’S HER WRIST!”) and she was whining a little more and sleeping a little less. Plus, she decided she couldn’t feed herself and so for the first time in her life I was spoon-feeding her. All that extra care was cutting into my Real Housewives time so, ya know, something had to give.

Omitting that one quick month did nothing but highlight how much Anna is changing.

Gone are the incremental changes, the little personality emerging bit by bit. Anna is growing and changing at the pace of the Kool Aid man, crashing through a brick wall, pausing just long enough to say, “Oh YEAH!” 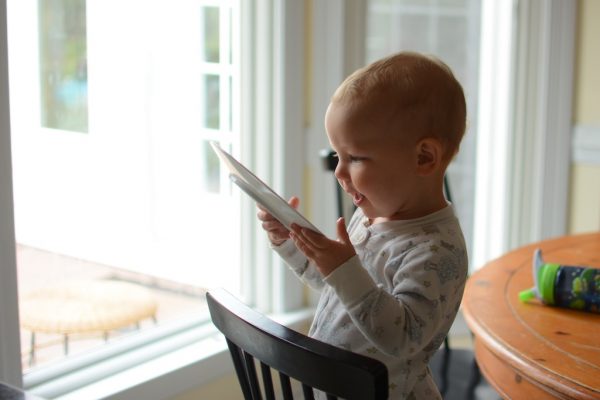 Anna fancies herself one of the big kids, which is adorable in theory but completely inconvenient in reality. Her chair-climbing habit, I decided, is because she sees the big kids sitting in chairs. Older siblings! Such bad influences!

She now pushes a chair up to the counter so she can reach apples and throw them at me when I’m emptying the dishwasher. She climbs onto the table and helps herself to any abandoned drinks or snacks. She does all of this completely pretending that she doesn’t understand the words “no” or “get down.” 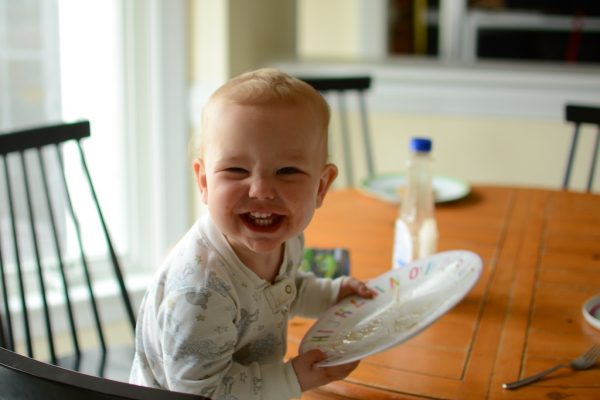 But she DOES understand and I KNOW she understands, because learning phrases is just another one of her new favorite pastimes. Tom taught her to “RUFF!” like a doggy. And when you ask her to go find a ball, she drops whatever she’s doing and looks left and right like a mom who just realized she left her kid at a rest stop. Then she scours the house looking for a ball.

The kids play a game where they touch their pointer fingers together and say “cut the pickle.” Then when you cut their fingers apart, they use them to “TICKLE TICKLE!” The kids were all being silly, repeating the phrase over and over when someone noticed Anna standing there with her fingers touching, waiting for us to include her.

Anna still only says a few words, but the only word she needs is “no.” Her well-placed “no” still makes me laugh like nothing else. It’s so assertive and unexpected in her sweet little voice. And also, HAHA! So adorable to think you get a vote, Anna. Now get down from that chair. 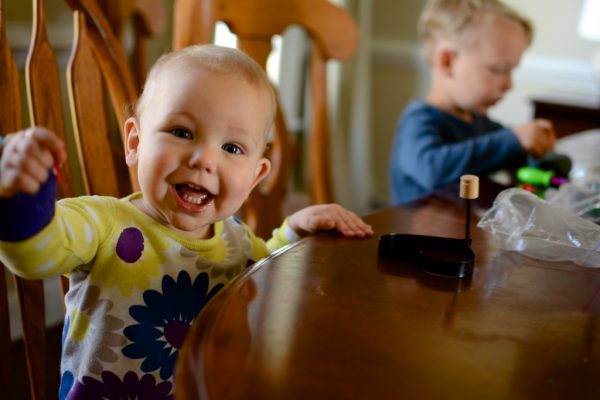 She is learning how to make her vote count, though. She’s perfecting her very own version of the throw-your-body-on-the-floor-screaming method. It’s funny because when David was a toddler, whenever he threw a tantrum I would become completely unraveled. I thought he was the only toddler to ever throw a tantrum and that my experience was completely solitary. Now I know better. And I am not at all implying that I have anything figured out, but I am saying that if you’ve ever asked a family with four, or five, or six kids how they survive these torturous phases, this is how — with experience and knowledge that it all passes and gets better. And they do it with a screaming toddler under their arm.

Plus, if I’ve learned anything in all these years it’s that at this age most tantrums can be solved with an upside-down spin hug. 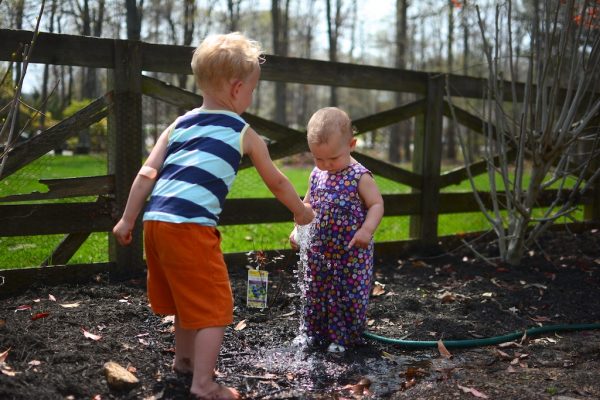 One of my favorite things about Anna is watching her take delight in God’s creation. She loves to be outside. When she’s banging on the door asking to go out, I bring her shoes and she backs up several steps before plopping down and pointing her toes, ready for shoes. She particularly loves animals. Whenever we’re on a walk and we see a goose, or a dog, she sits up straight in the stroller and shouts “OH! OH! OH!” Then she looks up at me smiling, as if to say, “Did you see that, Mommy? Isn’t that amazing?”

It is, perhaps, one of the most beautiful side effects of having a child. They have an uncanny ability to transform the things that you long-ago dismissed as ordinary into amazing delights. “Can you believe it, Mommy? That goose decided to go for a walk at the exact same time that we did, and here we are walking together, saying hello!” 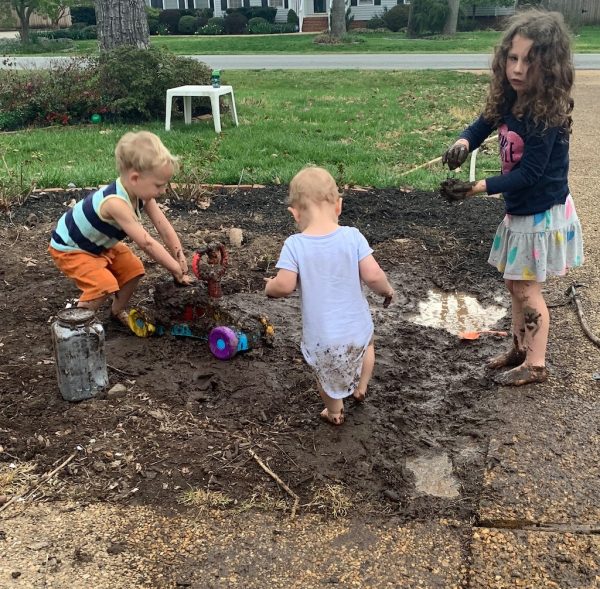 We will remember this month as the month that you wore a 3T Pink Floyd t-shirt almost every day, because it was the only shirt that fit over your cast. You were so cute with your purple cast, swinging it at your side. It’s been a week since it was taken off and you still hold your little arm at a right angle.

This was also the month that you decided you were too old to take two complete naps. So all month we have been moving sleep and wake windows. You’ve done great; you are so flexible and good-natured.

It was also the month that you started sleeping through the night.  Initially, when you got your cast you seemed so uncomfortable that I prepared myself for a month of disrupted sleep. Then one morning your Daddy asked, “Did Anna sleep through the night?” Yes, she did. And then I whispered so the universe couldn’t hear me, “And she did the night before, too.”

You are doing so much better with sleep, and this and so many other milestones are evidence that you are emerging from the baby stage for real.

When your siblings were your age I was already pregnant. That seems amazing to me because you’re still such a baby. When the next baby was born, they were shuffled into big kid status — sharing rooms, carseats in the way back of the van, and Saturday excursions with Daddy.