Even though I still feel like Anna was born yesterday, or maybe even five minutes ago, this month she has transformed. She is no longer my sweet, cuddly newborn, but a babbling baby that chews on her fingers and trills when she smiles. So many of the parts of the newborn stage that were so, so very difficult are fading, and in their place are chubby thighs, neck strength, and lo! she naps! 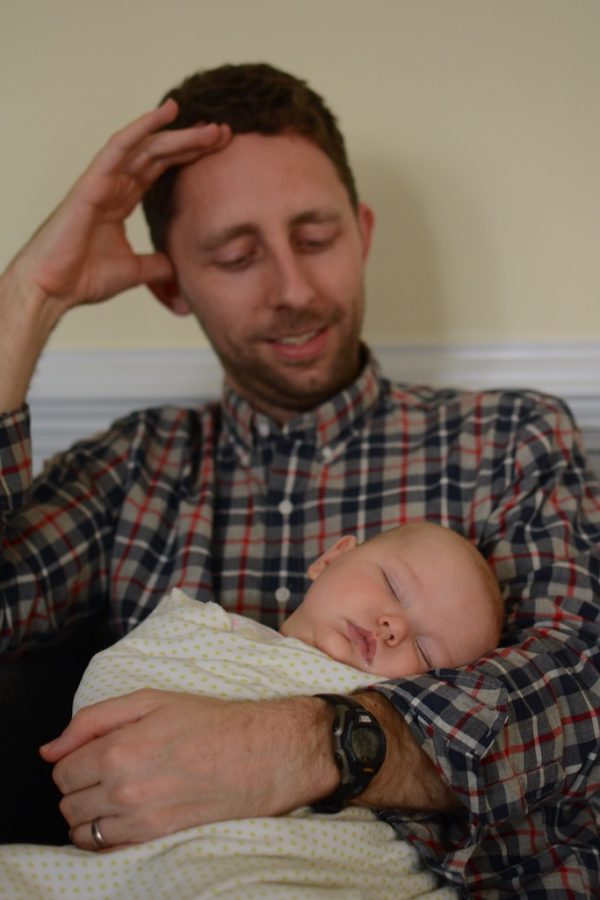 I have a lot of friends who are in the woods right now with infants. They have babies that need to be held all the time, want to nurse all the time — or worse — are having trouble nursing, and they are fussy, especially in the evening. To all those struggling, exhausted moms and dads, I want to give you a hug and say, “It gets better. And it might even get better by month four.”

Maybe after four months I’m just used to it? EITHER WAY! I’m here to tell you, month four has been great. As in, Anna never screams through dinner until bedtime anymore. Now it’s just my three big kids who do that. 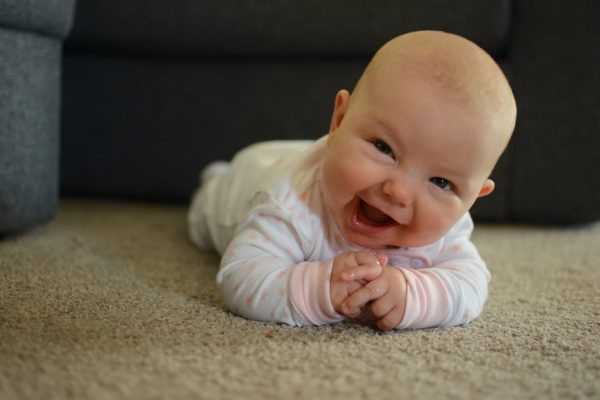 I’m not saying things are easy or even that I’m not holding and nursing Anna all day. I am. I still go to bed, arms and shoulders aching from holding a baby. I spend all night nursing and I wake up exhausted every morning. I’m still overwhelmed by all of my responsibilities, and I have enough postpartum hormones coursing through my veins to de-rail a train. In other words, we’re not back to normal. Instead, we’re starting to understand our new normal as a family of six. 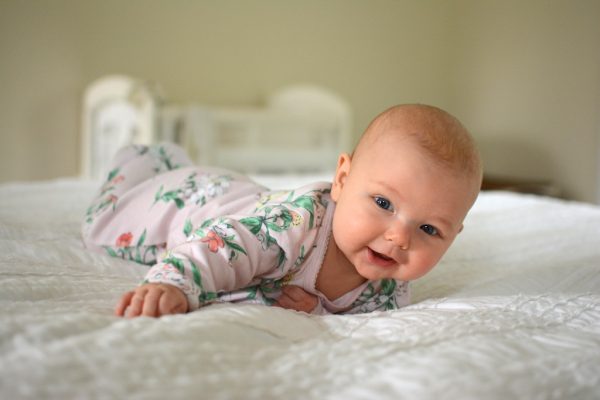 At four months Anna can roll both ways, is wearing 6-9 month clothes, and weighs 15 pounds. Anna drools all the time, and learned to make a smacking noise with her lips that the kids love. I also feel like I need to mention that she does not — and never has — spit up. She spits up so infrequently that I actually remember specific spit up incidents and can count them on one hand.

She is ticklish, laughs easily, and loves to chew on her blankets and pull her sister’s hair. 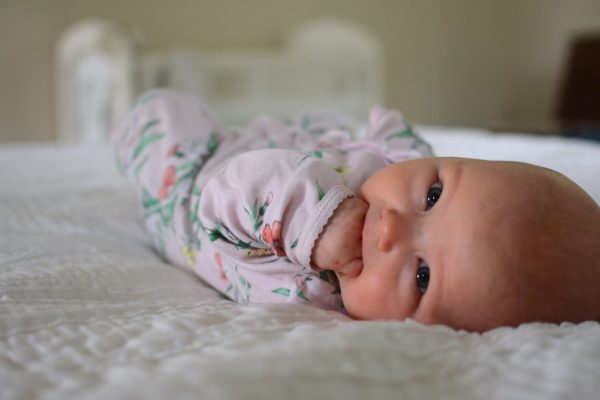 At the beginning of the month Anna’s sleep habits took a steep dive. She had been waking up twice, or sometimes just once at night. Then, right on cue, she did that four-month sleep-regression thing everyone talks about, and started waking up every 1-2 hours.

Sleep regressions are cruel like spring weather. You get one 60 degree day in February and you break out your flip flops, only to get a snowstorm in March. Cruel.

Sleep regression aside, Anna usually wakes up twice at night to nurse and sleeps from about 8:30 p.m. to between 7 and 8 a.m., or whenever we need to leave for school. She takes a predictable morning nap, and another nap around 5 p.m., but besides that I genuinely have no idea what she does. After naps she does a little tummy time, gets smothered by Mary Virginia, and once she starts to fuss or rub her eyes I try for another nap. If it doesn’t happen, I pick her up, hand her back to Mary Virginia, and then we try again a little later. This, THIS is the benefit of having four kids. When I had one baby I was so upset and high-strung about naps IN PART because David would turn into a fire-breathing dragon without a nap and frankly I couldn’t handle the smoke damage. And IN PART because I didn’t know what I was doing and I wanted to know what I was doing and MOMS WHO KNOW WHAT THEY’RE DOING HAVE THEIR BABIES ON SCHEDULES. And in part because I wanted alone time.

None of that is relevant anymore. And to that I say CHEERS! 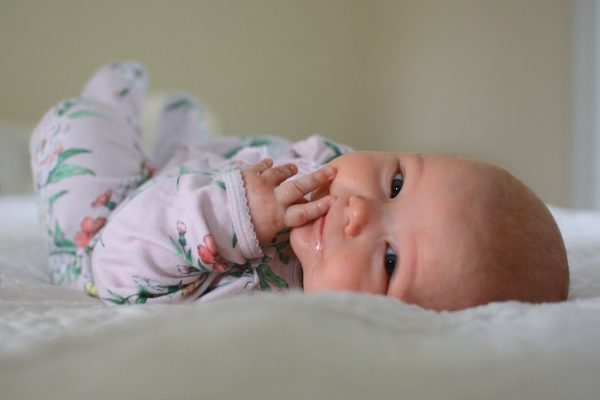 Every month I look back and read what I wrote about your siblings at the same age, and from what I can tell, month four is when the first glimpses of personality start to show. In Thomas’s 4-month update I wrote:

“…their personalities at four months are a glimmer of their personalities as toddlers. There’s enough foreshadowing that Mary Virginia would be a terrible sleeper that it’s hard to read. And David is already starting to emerge as the stubborn, opinionated boy I know today. But that’s all, just glimmers. I have a feeling that I’ll smile when I read this in two years and think, ‘Wow, Thomas was sweet and loved to laugh back then, too.'”

I still can’t tell what kind of toddler you’ll be, and that’s one of the great parts of being a parent — watching your child unfold in amazing, beautiful ways you never expected. But if the glimmers of personality you’re showing do stick around, you’ll be sweet, fun, adored by your siblings, and you’ll look great in blue.

And if for the rest of your life your favorite thing is to be held and cuddle with your mama? Well, sweet girl, that’s what we call “best case scenario.” 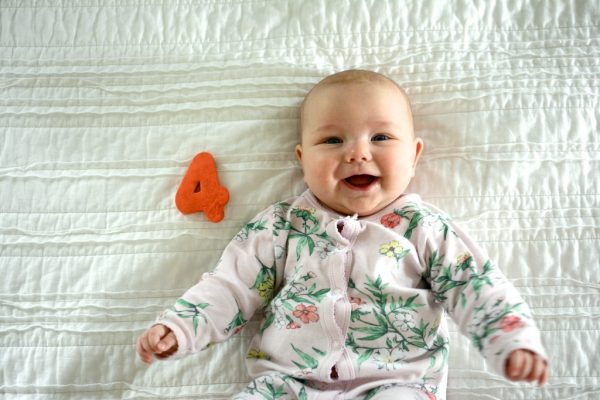 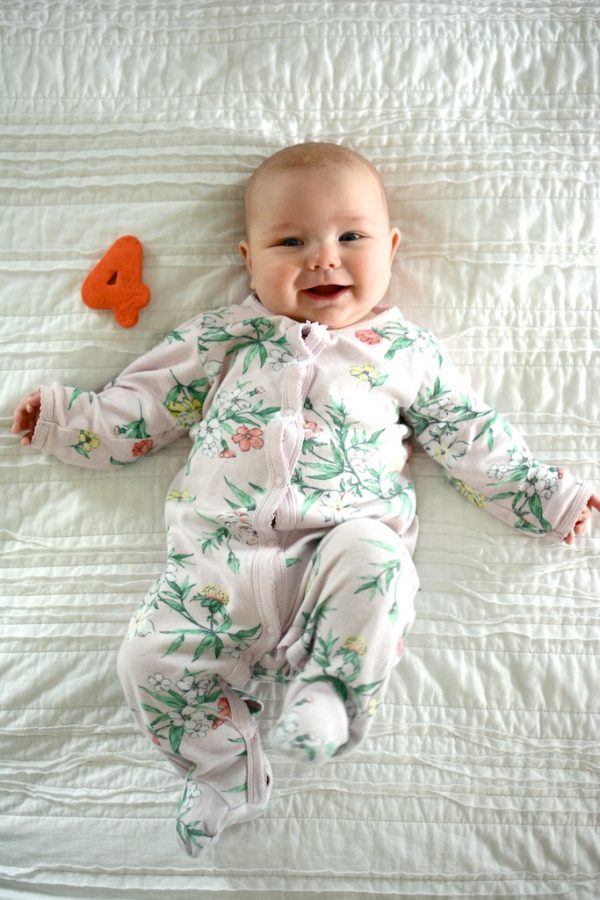