Way back in May when I found out I was going to have a baby in mid-November, I immediately thought through the calendar. It will affect Tom’s birthday, Thanksgiving, and Christmas. And then there’s Halloween.

At 38 weeks, I wasn’t expecting to have a newborn, but I was expecting to be very big, very exhausted, and have very little self-control when it comes to individually-wrapped candy.

With that in mind I planned to bail on Halloween completely. I’d prep costumes and put out a bowl of candy, but that’d be my contribution to Halloween 2017. I’d walk to our immediate neighbors, then bail while Tom took the kids around to the rest of the neighborhood.

THAT IS NOT WHAT HAPPENED. 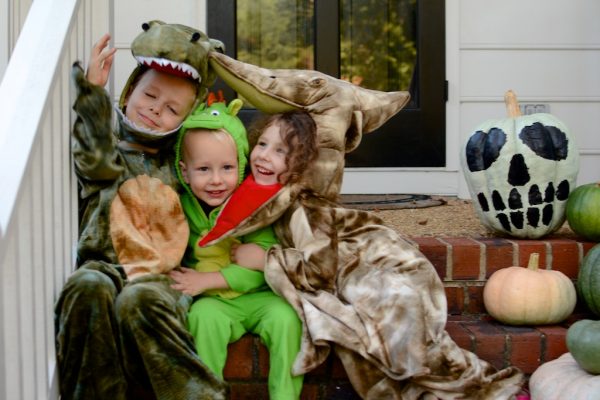 At the bus stop a friend invited us to join the neighborhood kids for trick-or-treating at a nearby senior center, so we threw on costumes and joined friends for a fun, chaotic time — fun and chaotic enough to inspire all the enthusiasm this very, very pregnant lady needed to hit the Halloween streets.

We rushed home, threw back some pumpkin pancakes, and headed out for trick-or-treating in our neighborhood. 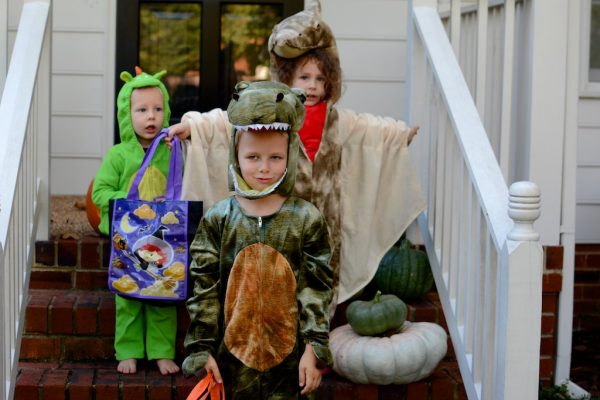 I was worried she’d change her mind last minute, but she didn’t waver. The influence of a big brother, turns out, shouldn’t be underestimated.

I love a good homemade costume, so I cruised Pinterest for about 10 minutes before deciding — this isn’t my year — and I ordered the first pterodactyl I found. I didn’t even have motivation to shop around. Who was I kidding thinking I’d be up for paper mache and the sewing machine? 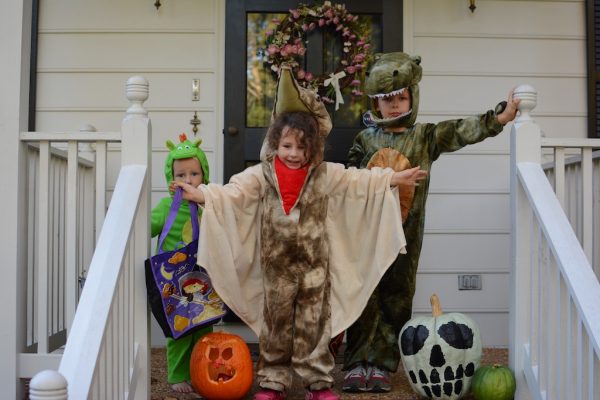 Thomas wore the dragon/dinosaur costume he wore last year, and that David wore when he was one and again when he was two.

I tried to get Mary Virginia to say she was a Mary-dactyl but she refused.

“I am a PTERODACTYL!” she would say. “A MARY-DACTYL IS NOT A REAL DINOSAUR!”

Ok. I’m not sure I have a response to that. 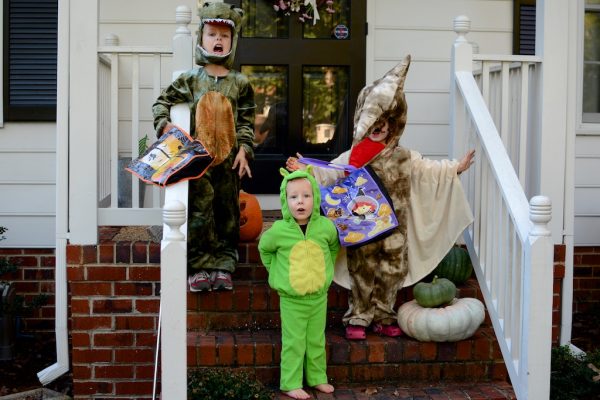 Actually, YES I DO. Her hat didn’t fit very well and she took it off the moment I finished taking pictures. Body of a pterodactyl, head of a loquacious, curly-haired four-year old? That’s a Mary-dactyl. 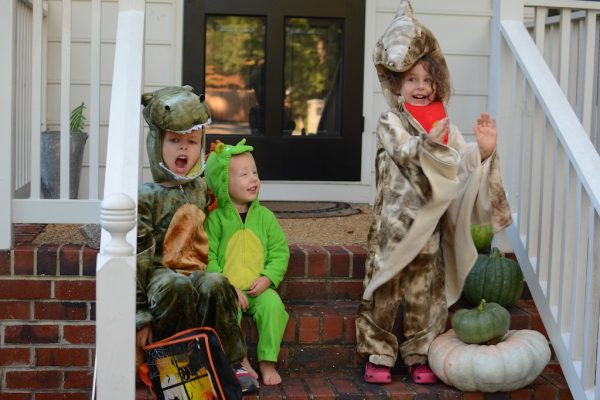 Thomas was mostly amazed and overwhelmed by Halloween. He loved every costume and decoration, and when he saw someone dressed as the marshmallow man from  Ghostbusters and he lost the ability to move for five full minutes.

The marshmallow man costume was impressive, even though the kid couldn’t move easily. Tom commented that he couldn’t walk, and after that anytime Thomas saw a costume he liked he’d say, “OH! He can’t walk!” and then gleefully clasp his hands in front of his face and laugh.

He wanted to touch every decoration, the scarier and more surprising the better. He loved masks and called them helmets. He saw a little girl dressed as Peppa Pig and tried to get into her car.

But he was also super tired, grumpy, refused to wear his dinosaur jacket, and didn’t care about the candy. (And I admit, that also SORT OF describes 38-week pregnant me. Except I am VERY DEVOTED to the candy.)

Mary Virginia was also teetering in the “kind of tired, kind of over it” camp, but she was motivated (again) by big brother, who for the first year really understood the math of Halloween: the more houses, the more candy.

Even with all the excitement, we headed home to get the kids home by bedtime-ish.

While we were walking home, Tom ordered takeout gyros for us and the kids were negotiating hard for more pre-bedtime candy. My back was killing me and I could not wait to crash on the couch and ignore my still-messy-from-dinner kitchen and the lunches I needed to pack.

Our kids are finally old enough that they don’t spend most of the time screaming and refusing to participate. They were DELIGHTED, and it was great to tag/waddle along.

We had such a fun, exhausting time running through the neighborhood, hollering at the kids to slow down, to speed up, to stay together. We got to see neighbors we don’t normally see, and they all opened their doors with generous (festive!) kindness. That’s a big deal. We’re surrounded by so much that says the world is filled with the opposite.  Some people don’t like Halloween, and I get that. But what a great neighborhood activity, what a fun way to spend an evening together as a family.

I turned to Tom and said, “I think this was my favorite Halloween ever.”

And you know what? I don’t think it was JUST the hormones talking. Or the candy.