Christmas was exactly two weeks ago. Doesn’t it seem so much longer? New Years Eve comes at the exact right time because it marks the psychological distance between December 25 and January 1. It’s like six days but MAN oh MAN does it feel like a year.

A lot of our decorations are still up, and a lot of the toys the kids got are still waiting to be assigned a home. After we opened presents on Christmas morning, Thomas looked around and said, “The GOOD thing about Christmas is that we get all these new toys! But the bad thing is, where are we going to put all this stuff????”

Wow, Thomas. How did you know that that comment was EXACTLY what I wanted for Christmas!? 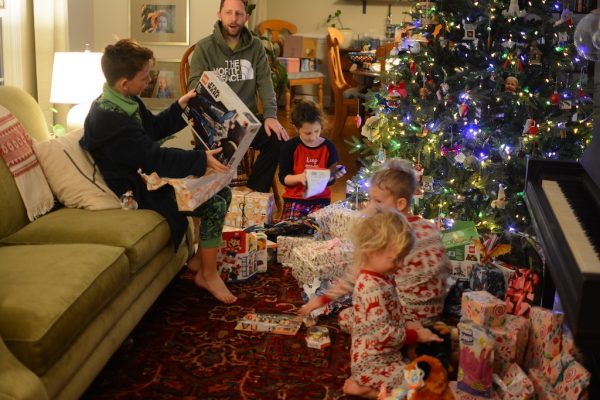 David and Thomas got a lot of the same things for Christmas. This made Christmas shopping incredibly convenient. I just bought two of everything and BOOM! Done! As soon as we get Mary and Anna on board with Minecraft-themed pajamas my life is going to be a  heckuva lot easier.

That convoluted paragraph of calculating and recalculating a 2-year age difference three different ways is a peek into what goes on in a mind that is addled by two years of a pandemic, three separate school schedules, 10 years of uninterrupted sleep, and the entire cast of Paw Patrol. See, kids! You do use math after school! 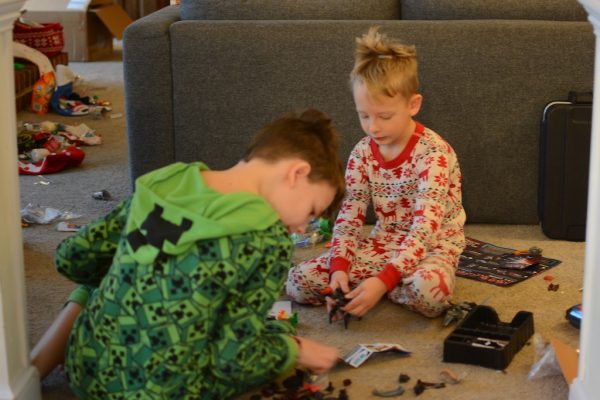 Snap Ships are sort of like Legos except not as cool. They’re easier to put together, aren’t as open-ended, and a heckuva lot cheaper.

David discovered Snap Ships in the no-gift-zone that is November — when Mom is absolutely positively NOT going to buy you anything outside of prescription medication. Not even a SUPER COOL toy Amazon advertised to you.

That’s why David convinced Thomas to spend all of his allowance and tooth fairy money on a Snap Ship. When it arrived, Thomas instantly handed it to David to put together.

“David REALLY likes them,” he explained.

I did the same thing with my older sister. Family lore tells that I handed her my Easter basket on Easter morning. What’s more, I vividly remember what Thomas is going through. I spent most of my childhood admiring her and her older-sister-ness.

(I also smuggled at least one article of her clothing out of her closet every single day of high school, lest I lead you to believe that I was nothing but a fawning subordinate.)

Thomas did the same thing on Christmas morning, and it took everything in me to not intervene.

Thomas hands David his toys to build, and it occurs to me that perhaps this is what older siblings are for? Maybe, if you look past a lifetime of hand-me-downs and being asked if you’re “so-and-so’s little brother,” MAYBE being a younger sibling is a pretty good gig.

As much as I want to intervene when Thomas lets David build his Christmas Legos to build, it occurs to me that I can’t steer them off this sibling dynamic. It’s not Legos and Snap Ships, it’s everything. And Legos and Snap Ships give them a low-stakes way to work out their roles.

They’ll forge their own way.

Instead of cringing when David takes the lead, maybe I should step back and be proud that he’s up to the task. Is there any greater gift than someone to walk by your side through whatever life is throwing you, and to occasionally tell you you’re being a twerpy little brother so CUT IT OUT!

Plus, Thomas might be missing out on the problem-solving and fine motor skills Legos help you develop, but I cannot overstate the skills I honed while DAILY sneaking clothes out of my sister’s closet. 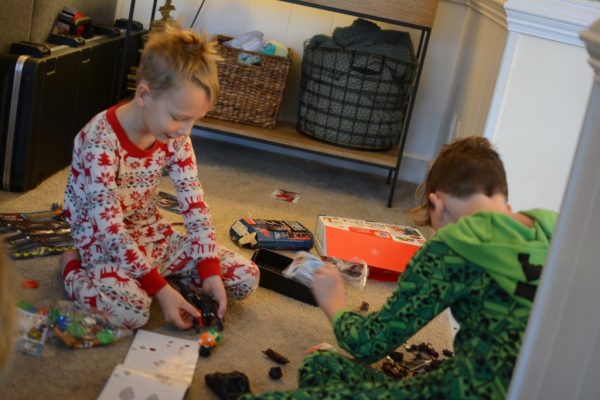 While they were sifting through their presents, Thomas said to David, “Did you notice that I got a lot of the same things as you?”

“Yeah. I think that’s because we’re into a lot of the same things,” David replied.

“Yeah. It’s also because I think you’re really cool,” Thomas said. And then they kept playing, as if nothing of monumental importance had even happened.