This week the kids had a day off school in the middle of the week, and I decided to throw them all in the van and haul them to a playground like I used to when they were little. There’s a nearby private school that just revamped their equipment, and I wanted to let  the kids try it out.

When we arrived at the school, there were still kids hanging from the monkey bars and racing down the slides — after school activities. As a person who can’t be bothered to look at calendars or schedules, I’m used to this sort of thing. I’ve gone to birthday parties on the wrong day and stopped at stores hours before they open — I tell you what, it’s a wild ride being completely disorganized.

This time, though, I had planned ahead. I knew the school wouldn’t have the day off, and that the playground would be closed during school hours. So I did a VERY uncharacteristic thing and I checked the school hours ahead of time. And THIS! This is why planning doesn’t pay! Because after-school activities weren’t listed on the website! So we had to leave, and all that time I spent planning ahead? Well, I’ll never get that time back.

To set the stage, these things happened in rapid succession in the small confines of the van:

1) the playground came into view
2) I realized our original plans wouldn’t work
3) I came up with a plan B and clearly announced, “DIFFERENT PLAYGROUND!”
4) I turned down a street that took us AWAY from the original playground.

The moment the can turned, Anna realized what was happening and asked to speak with the manager.

“ANNA!!!” he shouted. “We ARE going to another playground!”

David gave me an exasperated look and flopped back in his seat with the exhaustion of a mother that’s had it up to here.

“Anna is so ridiculous. It’s like she can’t infer anything!”

I couldn’t believe it. I’ve arrived at a milestone I didn’t know was coming. I have kids old enough to be exasperated by the same behavior they just stopped doing. That he expresses it with his 4th grade SOL vocabulary is just a little added bonus.

“It’s pretty annoying, right?” I told him, stuffing down my laughter. “It’s so great that you were never like that.”

(An example of David, definitely not ever being like that.) 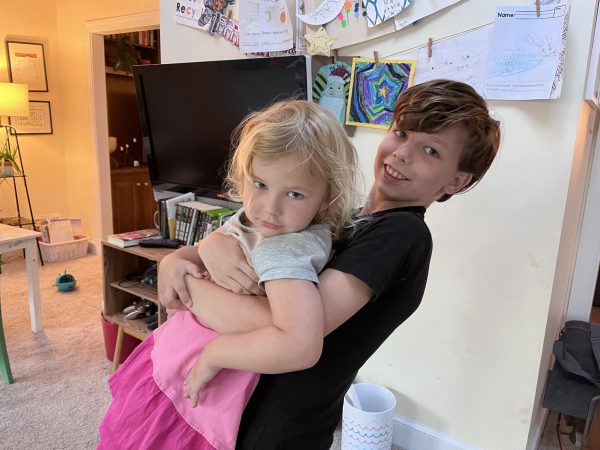