Today I’m twenty-one weeks, two days pregnant, meaning (even if the baby is born after my due date) I’m past the pregnancy halfway point. Except that this is my fourth pregnancy and I know that the second twenty weeks packs a very serious wallop. Thirty weeks should be considered the halfway point. At least.

Except for, you know, having orthopedic surgery without anesthesia, this has been my easiest pregnancy so far. I’ve been tired — very tired. But besides that I feel really, really good and I’m really, really thankful.

Besides fatigue, my biggest pregnancy symptom, more than with the other three, is that I am super duper emotional. That sound you heard? That was Tom rolling his eyes because “super duper” doesn’t quite cover it. And, yes, he’s thankful that Buick let us merge but he wouldn’t describe it as a “beautiful moment.” There’s no reason to cry.

I’m also eating a lot of cheese. Cheddar in my eggs, a Babybel for snack, some blue cheese on toast for lunch. Before I knew I was pregnant, I was sitting at the table eating Feta with a spoon as if it was cereal, thinking, “Why am I doing this? I should at least eat this with something but I cannot stop eating to get up and get anything else.”

This is also where I’d mention that I hurt my thumb frantically slicing gouda, but if I think about it too much I might cry.

The biggest change in the past few weeks is that my belly has officially popped. No, I don’t think it has to do with all the cheese, thank you for asking.

Generally it takes a while for me to start showing, but once I do I don’t stop until I’m 6 months postpartum.

David took this picture this morning — we were outside playing with shaving cream on the slide. Even though I’m bending over and you can’t completely see my belly, it’s a pretty accurate portrayal of pregnancy with a fourth child; much more than a picture of me in a field with a flower crown would be. 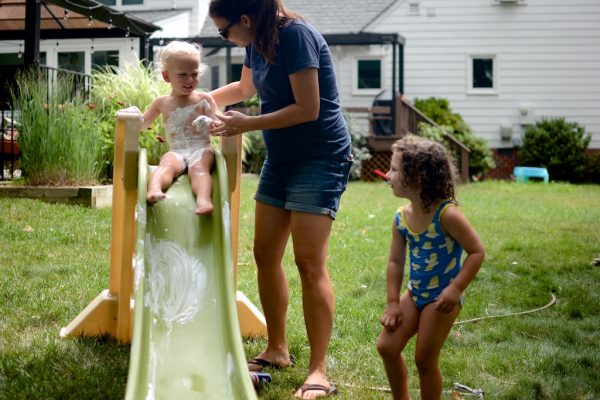 And we know the gender.

My ultrasound happened to be the same day as my niece’s fifth birthday, so we let her tell everyone.

You’ll notice I shriek before Berkley Grace even says anything — that’s because I accidentally read through the paper. And then I started crying because, well, that’s my reaction to everything these days.

It’s a girl, and we’re all so very excited.

We’re going to name her either Brie or Gruyère.