This is the story of the weekend I cut my thumb. It involves a kidney stone, a block of gouda, and a surprise ending NO ONE saw coming. I’m going to try to make it as short as possible, but you know me…

On the weekend of April 22 my parents came for a visit. That sentence you just read is a critical part of the story that needs emphasis. If they hadn’t been here, I can’t imagine how much more inconvenient the rest of the weekend would have been. If you’re going to have two medical emergencies in 24 hours, it’s best to schedule them when you have two extra adults in the house.

From there, everything goes downhill. Murphy’s Law. A comedy of errors. A crapshoot.

After a lovely Friday evening of eating spaghetti squash and shrimp by the pool, Tom waltzes into the living room all nonchalant-like and announces that he thinks, no he KNOWS he has a kidney stone. It was 9:45 p.m., and since the urgent care office closes at 10, Tom jumped in the car. When I inconveniently paused for 30 seconds to look for my shoes Tom suggested that maybe he should just drive himself, seeing as how this was turning into such a shoe-finding ordeal for me.

I jumped in the car as he was pulling out of the driveway, and it’s a good thing because in the 10 minutes it took us to drive to urgent care, Tom’s condition intensified. This gave me LOTS and LOTS of I told you so opportunities.

Later we learned that if I hadn’t been there they couldn’t have given him pain meds. So, quick PSA: if you have a kidney stone, wait A SECOND for your wife to find your shoes so she can be your designated driver. 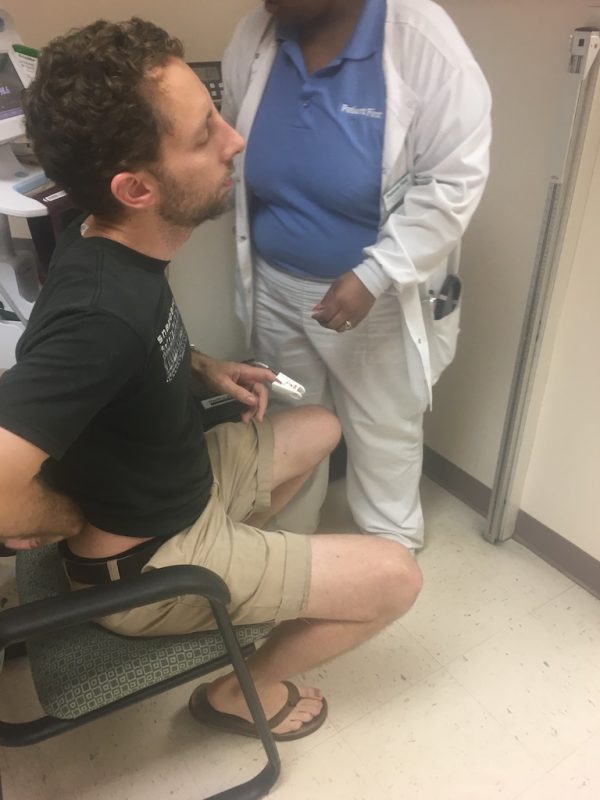 My favorite part of the whole appointment was when the doctor was listening Tom’s heart and he said, “You couldn’t be more healthy!”

Then, as if on cue, Tom keeled over in pain.

After the appointment and getting prescriptions we got home pretty late, so we went to bed late, and then kids had a restless night because… Well, because that always happens. I was tired, Tom was drugged, our kids tag-teamed me all night, and then Thomas woke up at 5 a.m.

Around 11 a.m. or so, Tom emerged from his kidney stone stupor and announced that he was no longer in pain! WOO-HOO!! And I asked him if I could celebrate his (supposed) departed kidney stone with a huge nap. (He hadn’t actually passed the stone, it stuck around for an entire WEEK.)

He said sure, and I excused myself to collapse in bed.

After a two-hour nap, I woke up and walked directly into the kitchen and grabbed a block of gouda. Then, with a knife I’d just  purchased for Tom for Easter, I sliced myself a piece of gouda.

I was starving and gouda is delicious, so I cut another slice. Then another. Then on my fourth or so slice, the knife slipped and I cut the front of my thumb.

People have asked me how it happened. Here’s my best description. Pick up a water bottle with your left hand. Now, holding an air knife, pretend you’re slicing off the label with your right hand. See how your thumb gets in the way? That’s how it happened. I wasn’t using a cutting board or common sense.

I calmly told my mom that I’d cut my thumb and in response she frantically threw me a maxi pad.  ANOTHER pro tip, if you don’t have a first aid kit handy, maxi pads are very absorbent dressings. My dad, a retired firefighter/EMT (and the guy who taught us the maxi pad tip) looked at it. It wasn’t bleeding much but it looked deep, so we decided it needed stitches.

Tom was walking upstairs to put Thomas down for his nap, so I grabbed a banana and ran out the door with my dad.

On the way to urgent care — the same place I’d just been just HOURS before — I started feeling really, really woozy and really, really cold. A huge wave of nausea hit me and I mentioned to my dad that I wasn’t feeling good and I wasn’t sure if I could walk.

I kept checking my teeny, tiny cut just to make sure I wasn’t, I dunno, bleeding out from the thumb. Nope. Almost no blood loss, and it barely even hurt. But I felt like I was going to pass out.

By the time we arrived I was feeling confused and starting to get really, really hot. I unknowingly walked past sign-in, plopped myself in front of a patient coordinator and said, “I’m sorry, I’m just really confused.” And then, as if to prove how confused I felt, my head started lolling around and I started sweating profusely.

My dad and the patient coordinator checked me in and immediately ushered me back to a room. (PRO TIP! Skip the line at urgent care! Go into shock!)

Since I was moaning and groaning like I’d lost a limb on a battlefield, everyone assumed I’d lost a lot of blood, but I hadn’t. I told a nurse that my best estimate was I’d lost AT MOST about a tablespoon. AT MOST.

So they took my BP — 80/64 — weighed me, did all that other intake stuff, and then asked, “Are you anemic? Are you on your period? When was your last period?”

To which I answered, “I dunno? February? Maybe March? I just weaned a baby and lost a tablespoon of blood and also I haven’t had lunch, WHO CAN KEEP TRACK?”

The nurse leaned in and asked, “Do you want a pregnancy test?” And I said sure. What the heck, I’m here. MIGHT AS WELL. 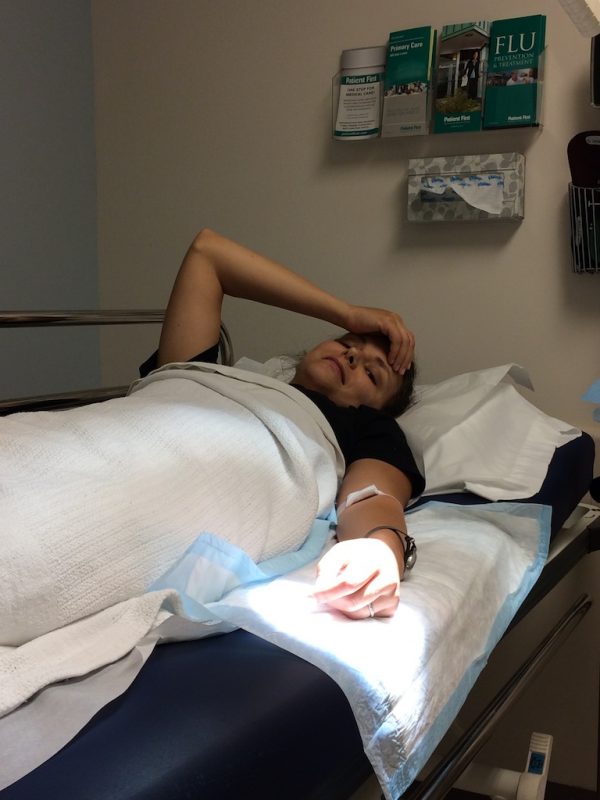 This is me recovering from shock and feeling very embarrassed about said shock.

Below is a photo of my thumb before stitches. I’m sorry if you hate seeing things like thumb lacerations, but this picture is to show you that it was NO BIG DEAL. This is why I couldn’t believe I was in shock, this is why we almost didn’t even go for stitches. 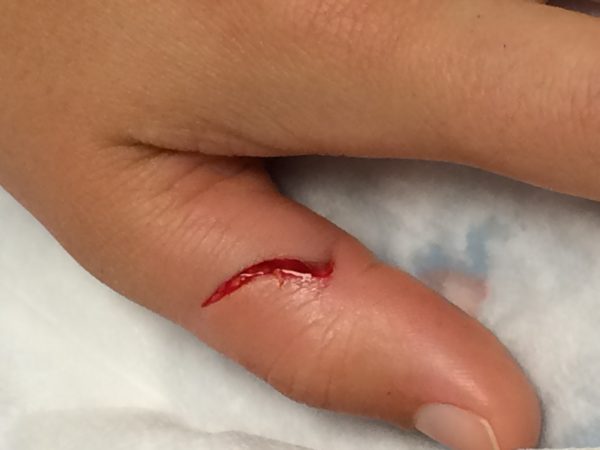 A nurse came in inconspicuously and drew blood, and my dad remarked, “Routine blood work?”

As in, “Why did that nurse just take your blood, dear daughter? You have a thumb laceration.”

Laying there with a maxi pad (ironically!) on my thumb, I very awkwardly replied, “Actually. They want to do a pregnancy test. Because I can’t remember when I had my last period.”

If only 13-year old Amanda had been there for that father-daughter conversation.

I had some crackers and waited and waited for the doctor. I stared at the ceiling, my dad checked my thumb, and repeat. We were just sitting there in silence when the doctor burst in and said, “SO YOU’RE PREGNANT!”

My dad looked up at the ceiling and smiled, started laughing, and said, “WELL ALL RIGHT!!”

I laid my head back down and waited for the lidocaine to take effect.

And that’s how we found out.

A few hours later, I went home with five stitches and some very, very big news. (The news of the severed tendon would come five days later.)

Baby Krieger number four, due November 16. I was probably 10 weeks when we found out, about 18 weeks now. We are very surprised, excited, and I’ll be honest, a lot overwhelmed.

And it all felt totally surreal and almost like it was happening to someone else, until my very first ultrasound. I heard the heartbeat and saw the legs kicking. It’s hard to describe what that feels like. 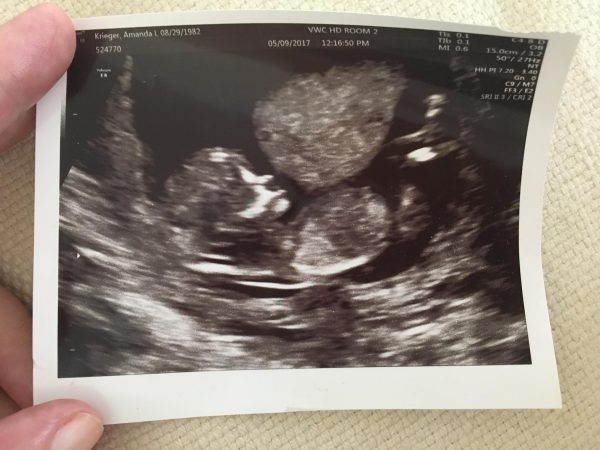 I know what you’re thinking, ah, so that’s why she’s been positively GLOWING lately…