At my most recent prenatal check-up, my doctor was asking me how I’d been feeling, and I told her what I tell everyone — mostly fine but super duper, all-the-time exhausted.

We talked about my iron levels and a few other things and then she asked, “Are you getting enough sleep?”

Yes. I’m mostly sleeping through the night (unlike my last pregnancy) and sleeping in in the mornings and taking naps on the weekends.

Then she asked if I have enough help and I answered, yes. My husband does everything except complain. I do that.

Then she said maybe I just need to take more breaks. After all, I am pregnant and caring for three small children, and that is a big deal. Sometimes you the one thing you need is to sit down and drink a glass of water.

I looked her directly in the eyes and said, “It is impossible for me to sit down more than I am already sitting down.”

The other day Thomas woke up from his nap and I was sitting down too much to rally and get our afternoon going. Instead of getting a snack and starting dinner, I let the big kids watch an extra show while Thomas wandered around the house emptying drawers and whatnot while I continued to sit down.

Thomas was in the playroom smashing David’s Legos and drawing on the table when he  pointed to the ceiling and said, “Iss a BIRD! I SEE BIRD!”

And I halfway looked at him and nodded and went back to sitting down.

Thomas got distracted but every minute or so he’d point to the ceiling and say, “BIRD! ISSA BIRD!”

I also ignored him because I was sitting down.

Eventually my laziness started to feel excessive, even for me, and I got up to put Thomas on the potty. (Oh, did I mention that? We’re POTTY TRAINING? Just what I need.)

So I walk into the playroom and guess what I see fluttering around our skylight? 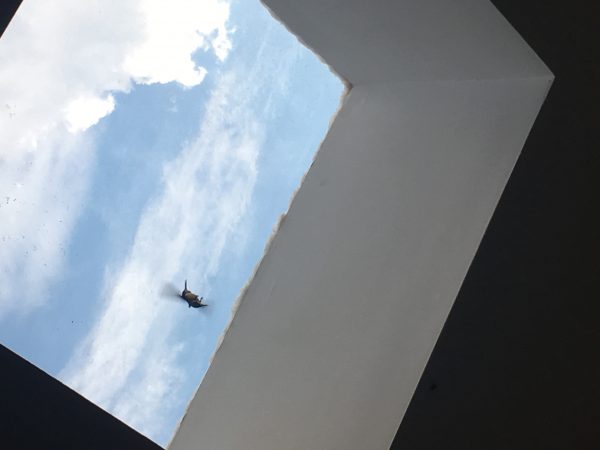 Thomas had been telling me there was a bird in the playroom for 15 minutes and when I looked up I expected to see basically anything but a bird in a playroom.

I had exactly zero idea what to do.

The big kids ran in and thankfully David had the very good idea to get the pool net. I ran outside, mentally adding hummingbird to the list of animals I’ve had to deal with during my tenure as a stay-at-home mom (chipmunk, possum, bat, snake, ET CETERA).

I ran back inside, wielding the pool net like some sort of bizarre, pregnant, pool-cleaning super-hero and before I had the chance to save the day, the bird FELL OUT OF THE AIR and landed like this: 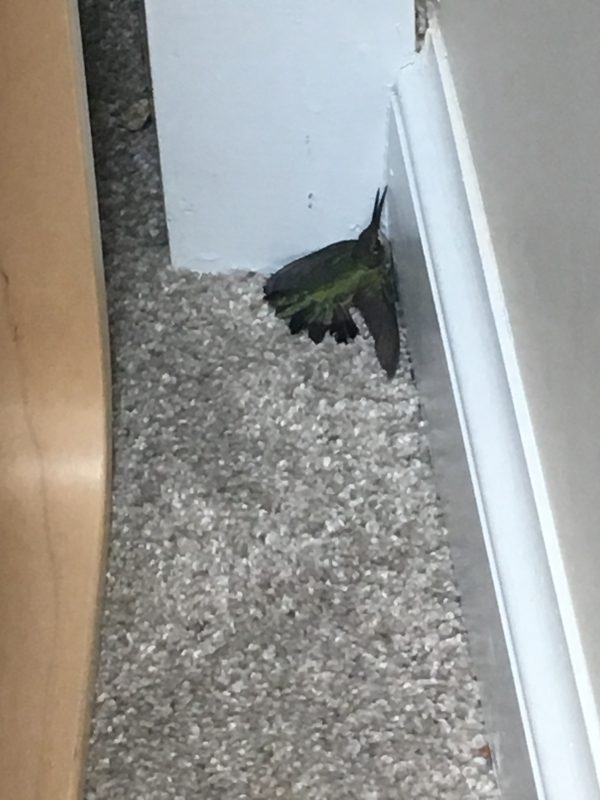 I know what you’re thinking and, yes, I thought it was dead, too.

But it ISN’T DEAD!!! Apparently this is what happens to hummingbirds. They eventually become exhausted and can’t fly anymore. This is also exactly what happens to pregnant moms. They fill up water cups until they simply can’t anymore, and then they collapse on the couch and everyone assumes they’re dead.

The poor gal was so tired she let me pick her up and took a breather while the kids all got a good look. 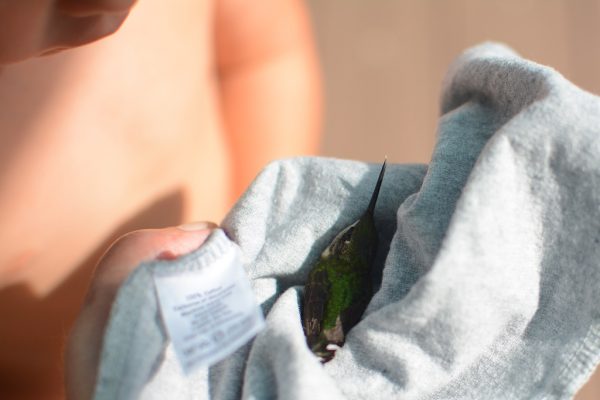 We went outside, and then she spread her wings and flew away. 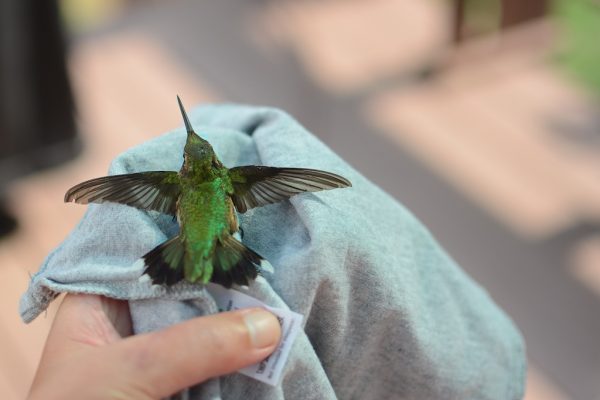 Before I had time to even get back inside, the kids asked for a snack as if things were normal. As if I hadn’t just been holding a HUMMINGBIRD!

And me? It was time for another break on the couch. All that excitement? That lasted five minutes, maybe less? Completely exhausting.