There are a great many traditions I started when I had my first baby. Almost none of them have lasted through the fourth (R.I.P. baby book intentions)

Some things I’ve mostly given up on (R.I.P. baby book intentions) and other things I haven’t gotten around to, but I still hold out hope (like making a one-year birthday slideshow for Anna.)

Some things I’ve manage to do, though. Using my normal trick of shirking housework and volunteer opportunities, I managed to take monthly baby photos, and keep track of a dragon Halloween costume for eight years.

And there’s this, a video of my freshly-minted two-year old declaring their age. It was never meant to be a tradition. I just happened to take this video of David telling us that he was two. It was so funny that we watched it over and over so many times that Mary imitated it when she turned two.

Two kids deep I had no choice but continue.

I filmed Thomas’s video a few weeks after his birthday, when he thought he was the only one in the world who had a birthday.

And now Anna. It occurred to us to teach her to say she was two solely for the purposes of this video. Is there any better description of the plight of the fourth child? The first kid gets homemade invitations sent in the mail for their themed party of friends and faraway relatives.

The fourth kid get, “It’s her birthday! Should we…tell her?” 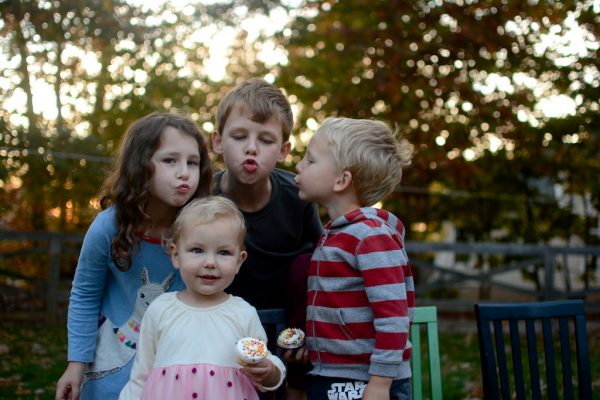