I’ve potty trained two children and that sample size is big enough that I can confidently say that each kid is different, and potty training is terrible. David potty-trained at age three in a blaze of frustration and stubbornness. Mary Virginia potty-trained at 23 months in part to spite me and in part because diapers are infantile, didn’t you know?

And then there’s Thomas, who is now potty-trained but is not included in the count of kids I’ve potty-trained because I had nothing to do with it. In fact, I was kicking and screaming so much that he eventually made a sticker reward chart to help get me on board. Positive reinforcement, it’s all the rage these days.

At the beginning of last May, right around the time Thomas turned two, he started expressing interest in the potty. I resisted for a number of reasons. Most of them can be summed up with the word “laziness.” Dealing with diapers is WAY easier than dealing with the potty. But even stronger than my laziness (and maybe this is controversial but I don’t care) is my firm belief in waiting to potty train as long as possible. I think potty success goes hand-in-hand with maturity and verbal development, and at 24 months, Thomas was a lot of things, but as long as I have to regularly tell him to stop licking the cat, I’d say he has some maturing to do.

Then, right around the same time, I cut my thumb, had surgery, and spent almost 12 weeks in a cast or brace.

Since Thomas is an avid reader of this blog, he knew that putting on a diaper was one of the most difficult things for me to do, and he learned how to take his diaper off.

I would spend an entire 10 minutes painstakingly diapering and dressing Thomas, and he would go around the corner and undo it all. I’d find his clean diaper in the trash.

The whole thing was incredibly defeating and discouraging; I spent most of the day dressing Thomas and he spent most of the day mocking me. I learned to wait to dress him until RIGHT BEFORE we needed to leave to be somewhere. Eventually, after trying everything from anger to overalls, I decided I’d rather deal with a naked baby than a screaming-on-the-floor-tearing-at-his-overalls baby.

Thomas’s nudity lead to a LOT of potty accidents. Like, a lot. It was annoying, but it was also summer, and we were outside a lot which made it much more manageable. Slowly, slowly, Thomas started noticing his accidents. When we were outside he’d announce he needed to pee, and excuse himself to a corner. Then he started doing the same when we were inside.

But me? I stood fast. WE WERE NOT POTTY TRAINING. IT IS TOO SOON! HE IS TOO YOUNG!

In the weeks before vacation with Tom’s family, I worried about our tenuous potty situation. The potty trained-ish situation was working for us, but not EVERYONE is comfortable with a diaper-less baby doing cannonballs on their couch. So in the week before the trip, I started working with Thomas — talking to him about the potty and taking him regularly. And he responded.

On vacation he almost never wore a diaper and he had exactly two accidents.

BUT I WASN’T FOOLED! As soon as we got home I got right back on my “he’s too young to potty train” high horse. And Thomas rolled his eyes and continued to run the show.

Then I started to regret my decision. Thomas had done everything short of writing a 2,000-word essay entitled, “I’m ready to use the potty, Ma!”

But preschool was about to start and I felt like I’d missed my window. I didn’t want to send a newly potty-trained two-year old to school. His teachers were supportive, but I was concerned about a potentially stressful potty situation and essentially setting him up for failure. On the first day of school, he went in diapers. That afternoon when he got home, the first thing he did was take off all his clothes, walk to the bathroom, and use the potty. He even flushed all by himself.

I couldn’t deny it anymore.

Since then he’s been wearing big boy underwear. And he’s doing great.

Me? I’m doing ok, thanks for asking. It’s been a big shift for me but to help with the transition I’ve been eating a lot of M&Ms, and once I get enough stickers on my reward chart I get a special treat! 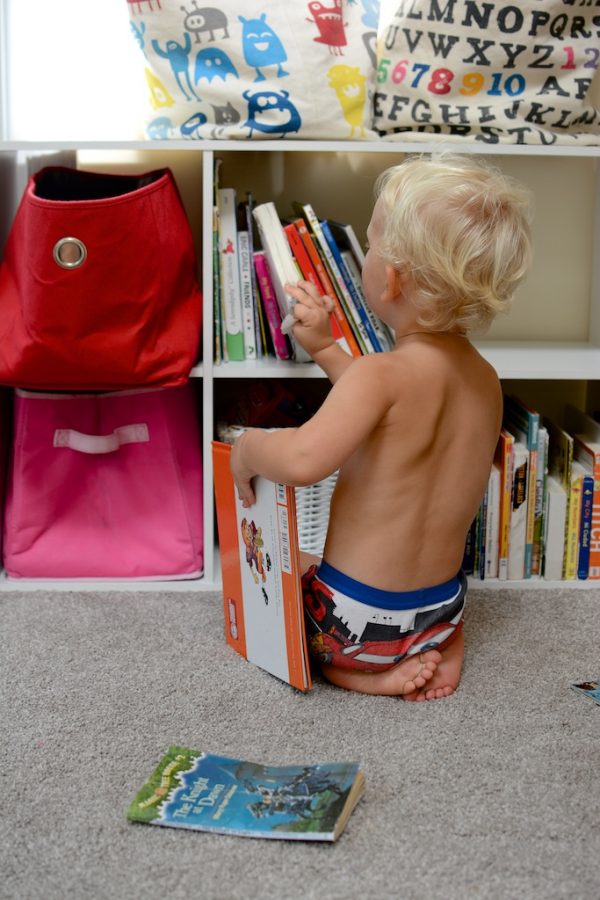