Thomas turned two over a month ago, but still whenever he hears the word “birthday” he immediately shouts, “IT’S MY BIRFDAY!”

Nothing starts a fight in our family like someone saying it’s their birthday. Almost IMMEDIATELY Mary Virginia says, “NO IT’S MY BIRTHDAY!” and David shouts that it’s actually almost Berkley Grace’s birthday! And then Tom and I can never resist chiming in, “No, it’s MY birthday!”

As always, Thomas is wild, fun, and good-natured. He loves to laugh, play, and gets excited about almost anything. Once Tom announced that we were going to Chick-fil-A and Thomas responded by running around the room fist-pumping. Even if I just tell him we’re going downstairs, but with enthusiasm — WE’RE GOING DOWNSTAIRS, WOO-HOO! LET’S GO DOWNSTAIRS! He responds by throwing an actual Mardi Gras parade, marching downstairs whooping and throwing beads. That’s just the kid he is — always excited, always up for a party.

Well, except for HIS party, I guess. 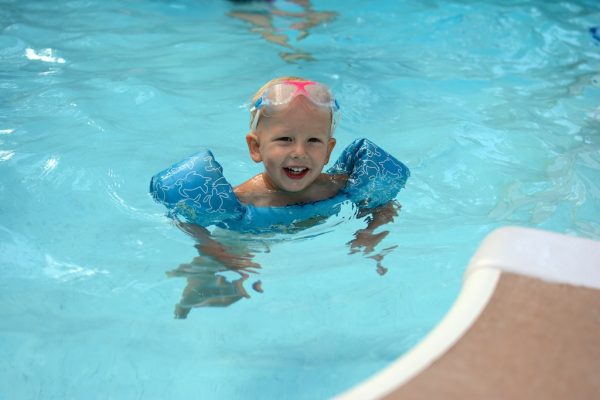 We keep waiting for Thomas to, um, grow up a little. To calm down, listen to instructions, stop running away from me everywhere. Instead he’s just getting bigger and taller and as a result more capable and destructive.

He climbs, he opens, he empties. He can scale our kitchen counters using the handles, and he can open our fridge, our exterior doors, and our van. Instead of just playing in the toilet like an amateur toddler, Thomas opens the back and looks for something to break. 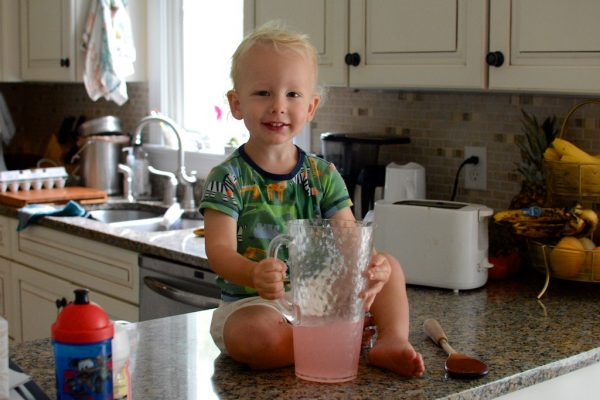 Thomas spent a lot of this month frustrated that he couldn’t talk. Instead of doing something to HELP the situation, like maybe reading the dictionary, he opted to do a lot of throwing himself on the ground and screaming.

Then, like a switch was flipped, his vocabulary exploded. He talks so much now, in words and phrases. He says and repeats almost everything, but he only speaks in shouts and commands. Never, “Come on, Mama!” Always, “COME! ON! MAMA!” Never, “bye,” always, “BYE!BYE!” If he could type, his caps lock would be permanently on.

His two favorite phrases are “MINE!” — so helpful in identifying all the things that are his. And then there’s the sentence that’s streamlined so much of our day, “I DO IT!” 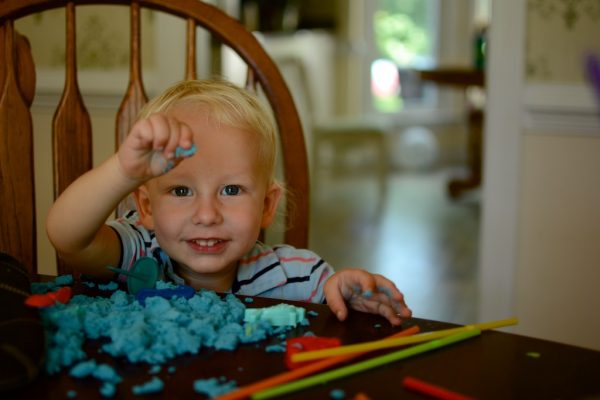 Thomas is going through a pretty serious nudist phase. We put clothes on, he takes them off. He won’t clothes on and he definitely won’t keep a diaper on. This no-diaper thing has added some new words to his vocabulary. Words like “potty.” Sometimes he even asks to go to the potty, and he even pees in the potty probably once a day.

Some people might think this is a sign of readiness for potty training. They would be wrong. This is solely a sign that he’s coming up with new and creative ways to make me stress eat. 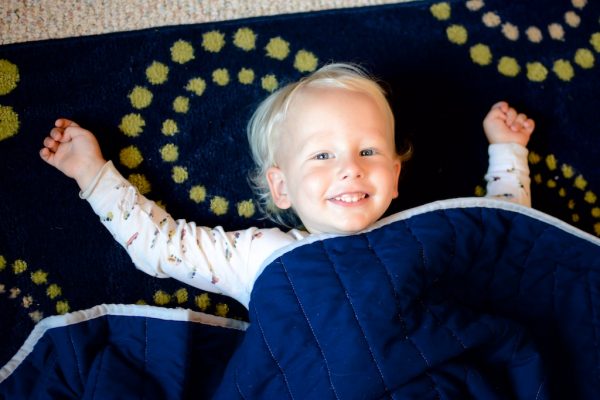 Thomas is fascinated by bugs, spraying the hose, and his favorite place to be is outside. He loves trucks and especially airplanes and helicopters, and every night before bed we read “Little Blue Truck.” Whenever anyone pulls out of our driveway, Thomas demands they “BEEP! BEEP!” And we all walk out to hear the horn.

He is devoted to playing basketball. He asks to play with our hoop several times a day, and will shoot the ball for way longer than the typical toddler attention span. He’s actually gotten pretty good, and my favorite part is how he cheers himself on, saying things like, “Oh! Almost!” Or, “I DID IT!”

Even above basketball, his favorite thing is whatever his brother and sister are doing. No matter what Thomas is playing, as soon as his siblings start drawing, or playing Play-doh, or chasing each other around the house, Thomas drops EVERYTHING and joins in. He doesn’t care if they want him — they usually don’t — he’d rather start a fight than be left out. 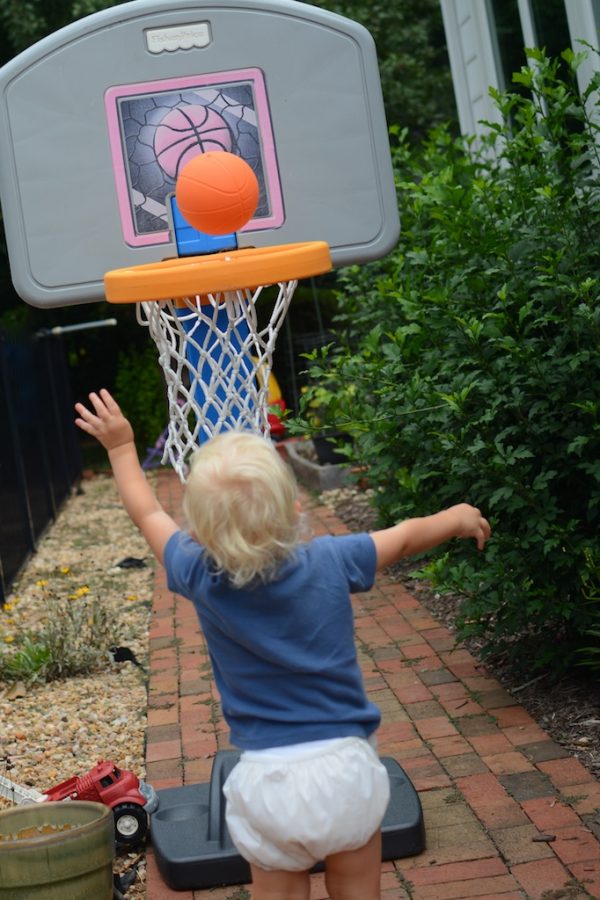 Of all the kids, Thomas has been most affected by my hand injury. I wasn’t able to lift him or put him in bed for a while, and I still can’t change a diaper. Unless he’s completely cooperating, I have a hard time managing him because, let’s be honest, it generally takes three to four hands to wrangle a toddler. Unfortunately my response isn’t creative, enthusiastic parenting but is frustration and self-pity.

With all the changes and adaptions in the past several weeks, Thomas has handled things pretty well. I want him to stop acting like a two-year old; I want him to be patient with a situation I’m struggling with. He has been loving and helping in his very own two-year old way — sometimes to humble me and remind me that even with two hands I can’t do this job, and sometimes to climb in my lap, snuggle into my chest, touch my hand lightly and say, “hurt.”

It’s funny how two-year olds can be so predictable. Right around his second birthday, Thomas amped up his decision-making skills, and with it his tantrums, his desire to be heard and appreciated. Two can be tough. It’s midway between a kid and a baby, and not quite either. I get it, I totally do. Sometimes I don’t understand why I can’t have cake and TV at breakfast, so why should Thomas?

Two can be hard, but it can also be wonderful. If newborn days are sleep and slow, two-year old days are technicolor and surround sound — full of tickle fights and funny faces. 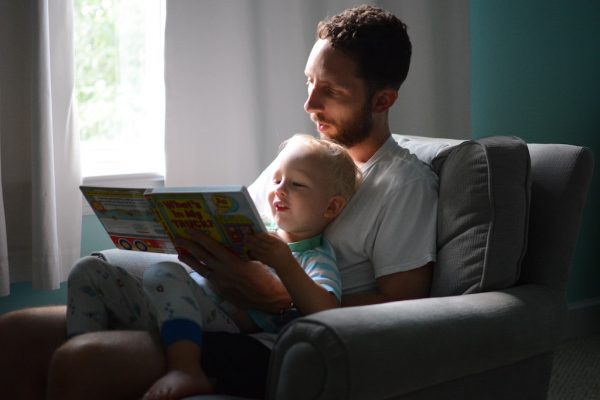 I talk about how wild you are so much that I barely ever mention how incredibly sweet you are. You are my wildest child by far, but you also might be my most affectionate. You love to cuddle, hug, be held. After each time you swim, you ask to be wrapped in a towel and snuggle; you want goodnight kisses from all of us each night. You are independent and never stop exploring, but you always check in.

You are such a fun companion, a dependable sidekick. If it weren’t for you, none of us would have tried to wear pants on our arms today. Even though you are a lot, a LOT to handle — and I can already tell you that you’re not getting your security deposit back — you’re also so incredibly sweet.

It’s amazing how God makes us, isn’t it? So complex and wonderful. That’s what I think when I think of you. I’m so thankful that God made you exactly how you are, so curious and headstrong, and yet so gentle and kind. These days I think a lot about how you’re going to be such a wonderful big brother, but beyond that,I can’t wait to see the man you will one day become. And I’m so glad I’ll be along for the ride.