Just two weeks after school stared all five of us have had an awful cold, and two of my kids have had fevers. I can tolerate a lot but ever since The Great Krieger Sick House of 2014 that extended into 2015, my right eye sort starts twitching anytime one of my kids sneezes.

Then David came home singing “Wooo let the DOOGS out? WO! WO! WO!” and asking for an Xbox, a request he followed with, “Mommy, what’s an Xbox?”

After that I very dramatically announced that I was officially done with kindergarten and its terrible awful influences. WHAT’S NEXT!? He’s going to come home clubbing seals or saying The Wire wasn’t the best show ever written.

It’s not that there’s anything wrong with having an Xbox or even against the Baja Men. It’s just that I didn’t introduce these ideas, and I wanted to introduce them on my own timeline. This means I’m losing control. I wanted to be the person who first asked David, “Who let the dogs out?” Plus, if you’re going to sing that song at least get all the inflections right.

One morning he was drawing and writing — something else he’s doing a lot more of since school started. Writing, sight words, sounding out letters — and he asked me, “Mom! How do you spell ‘duh’?”

“David. WHY do you need to know how to spell ‘duh’? Who taught you that word? That’s not a kind word,” I responded.

“BUT MOMMY,” he insisted. “I need it for my activity!”

I reluctantly spelled it for him, D-U-H. And inside I fumed, who do I blame for this? TV? Friends at school? OLDER SIBLINGS OF FRIENDS AT SCHOOL?

Later I found this in the playroom. 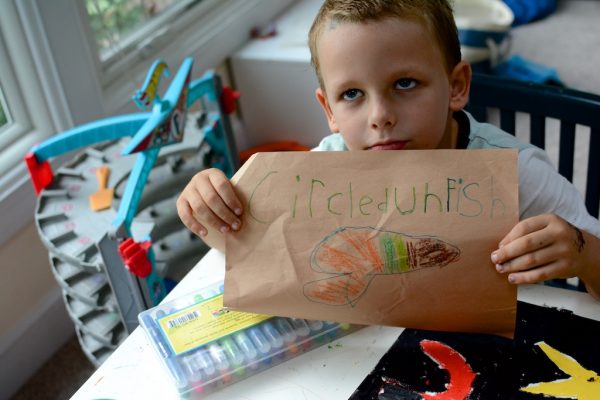