We had blissfully unseasonable warm weather this week. These are the days that carry me through winter to spring. The rest of the week is supposed to feel much more like February, but I can tolerate it after three days of spring smack dab in the middle of winter.

Perhaps the best part of these 70 degree February days is that we don’t have to deal with the inconveniences of summer. There are no mosquitoes, no humidity, and bathing suit season is still a few months away. As David put it, “It’s not hot, it’s not cold, it’s just WARM!”

On these days we spend as much time as possible outside. Park after breakfast, backyard after naps, dinner on the porch. We only come in for bathroom breaks, and only sometimes…

While we were outside, David went behind a little semicircle of bushes that he likes to use as a hideout. He was playing behind the bushes when he announced, “Mommy, there’s an animal back here!”

Before I continue, here are a few things you need to know about me. I am not afraid of bugs. If you have a spider in your house or a roach crawling on your arm, I’m your girl. I am really, really good at catching lizards. You know how toads pee when you pick them up? I don’t mind that.

But two nights ago I couldn’t sleep because one of my friends sent me a news story about a family that had 24 rattlesnakes in their crawlspace. I hate snakes.

The first thing that crossed my mind was that there was a snake in the bushes. I know it’s February, but it’s also 70 degrees and Donald Trump is our president. ANYTHING CAN HAPPEN.

I didn’t immediately panic, but I tried to assess the situation, “What? There’s an animal? WHAT KIND OF ANIMAL?”

“David. Is the animal alive or dead?”

“DAVID DO NOT TOUCH THE ANIMAL! Ok? Do you hear me? Can you move away from it?”

“OK BUT DON’T TOUCH IT! DO YOU THINK IT SEES YOU?”

At this point my heart is pounding and a thousand possibilities are running through my mind — wounded squirrel? Old toy? Baby bunny? WHAT KIND OF ANIMAL IS BACK THERE? It could be a ladybug for crying out loud. As I was cycling through the possibilities my brain kept ping ponging between LADYBUG! and COPPERHEAD!

The whole time David is looking down into the leaves, like he’s completely fascinated. He didn’t seem worried, but sort of excited and nervous.

At this point I’m sort of scared because, depending on what’s back there, it could get to David. But also why is he making ME enter the field of danger when he could just LEAVE?

I have this overwhelming urge to get low to the ground when I’m scared, and that starts to take over. I get into kind of a modified squat and slowly move toward the bushes.

At this point everyone else is interested in David’s discovery, and Thomas is toddling over to see what all the crouching and yelling is about. Mary Virginia, who is normally cautious, also wants to see what David has discovered.

I see Thomas in all his innocence and vulnerability walking over and I start screaming, “EVERYONE GET AWAY FROM THE BUSHES! MARY VIRGINIA! GO STAND THERE!”

Except Thomas doesn’t follow instructions, so he just starts running and I have no choice but to scoop him up and carry him STRAIGHT TO THE DANGER.

David urged me to hurry, “Mommy, hurry up! It’s going to get away!”

“David, I think if it wants to get away then we should let it get away!”

And so, ignoring every snake-fear instinct that is coursing through my veins, I step behind the bush.

At the exact right moment, David spins around, holds his hands up and screams, “GOTCHA!” 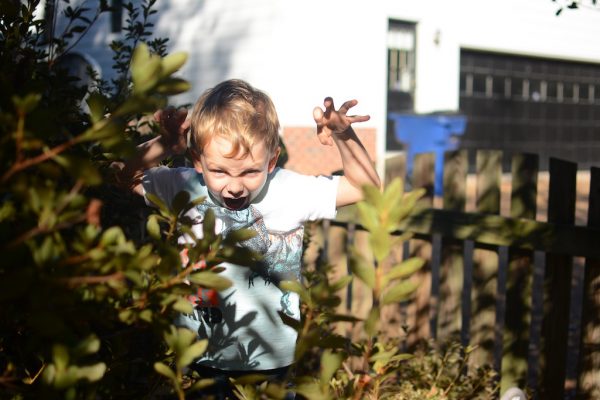 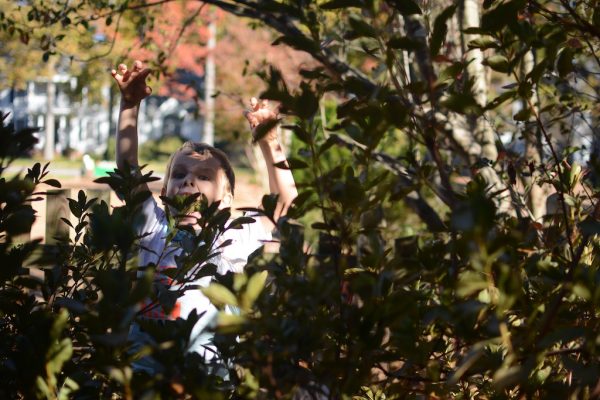 I put Thomas down and hugged David, laughing as I thought through all the steps of the set-up and delivery and how utterly convinced I was.

Not only did he get me but he gets me.

If David was angling that as a early Valentine’s Day present, well then he totally nailed it.