Back in August, I started doing a monthly memory verse with our kids. I downloaded the printables here, and hung them in my dining room.

My approach was casual; my kids are young so I didn’t think it made sense to push too much structure. I was just going to say the verse at the beginning of every meal, and my hope was that it’d be an easy way to incorporate scripture into the day.

The first month didn’t go very well. It was Jeremiah 29:11 and — completely unrelated — we also happened to be in the thick of potty training. Every time I said the verse, David interrupted me so I never, not ONE TIME got to finish. It went like this:

Me: For I know I have plans for you, declares the Lord, plans to…

David: GO TO THE POTTY!

It was a time in his life that “Go to the potty” was the correct answer for everything.

Eventually, halfway through August, I just gave up.

The verse for September was John 8:32. This time I sang the verse, and after a few days I’d leave out a word and have David sing it. It was amazing. In no time David was singing it all by himself, including the scripture reference. Except that, instead of John eight, he’d say his cousin’s name, John AMOS, thirty-two. Close enough.

It went SO well that even Mary Virginia learned it. For this verse, we did the exact same thing. I sang a little song, but this time no one wanted to participate. The verse, for some reason, didn’t stick at all. Since, in this case, “you” is a little ambiguous for a three-year old, I replaced it with “God”. I tried to talk to him about what it meant, but he just wasn’t interested.

Then Halloween got closer, and more and more monsters started popping up in my neighbor’s lawns and in stores. David isn’t too affected by ghosts and goblins. Instead, he’s very, very interested. Since we’ve been seeing more scary Halloween decorations around he’ll occasionally say things like, “When I see a monster I will say HI-YAH to it and it will fall down!” One day he expressed some genuine fear about what would happen if a monster was in our house. Whenever we see Halloween things, I try to emphasize that it’s all pretend, none of it’s real, but the images are still hard for a young mind to process.

I told him that when you feel scared, you can say the memory verse, “When I am afraid, I will trust in God.”

Instantly, a switch flipped and he knew it by heart (a lesson for me — even though he wouldn’t say it with me, he had learned it from hearing me say it over and over). He recites it all the time now, even without prompting. And Halloween — of all things– gives me a great chance to talk to him about how God made everything, is Lord of everything, is bigger and stronger than everything — even monsters — and that He loves David and is taking care of him.

We went to Chick-fil-A, and David was creeped out by the cow. (To David’s credit, it was  a little creepy. It was advertising their grilled nuggets and the whole thing was burned and charred in places.) He walked straight up to that creepy, three-times-bigger-than-him cow and said, “When I am afraid, I will trust in God.” My three-year old applying scripture, something I have a hard time doing.

That’s exactly my prayer for my kids and my hope in teaching them scripture — that it’ll be engrained in their hearts and the Spirit will remind them in the times they need it most that the TRUTH will set them free, that they can trust in God in times of fear, and so much more. 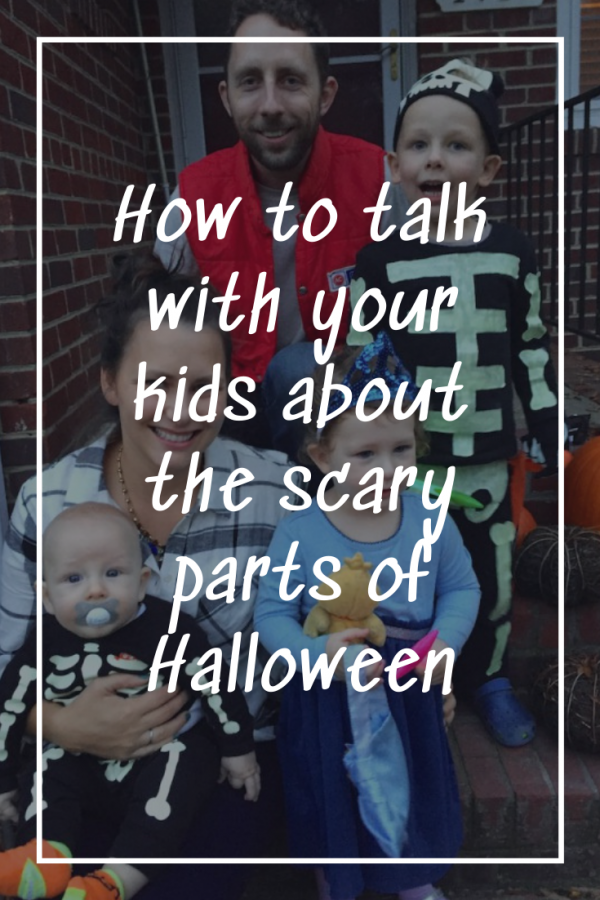