Anna is 22 months old, but I’ve started telling people that she’s almost two. When David was Anna’s age he had a baby sister, was about to start preschool, and was running for a seat in the Virginia House of Delegates.

Anna’s almost two. It’s high time all you people accept that she’s not a baby anymore. She will, however, despite age, maturity, whatever she says, always be MY baby.

In fact, this morning at church she was in a stand-off with another 22-month old. They were just shouting “BABY!” at each other, and then pointing and responding, “NO, BABY!”

If that isn’t grown-up behavior then I don’t know what is. In fact, with those rhetorical skills it sounds like they’re ready for their very own Facebook accounts! 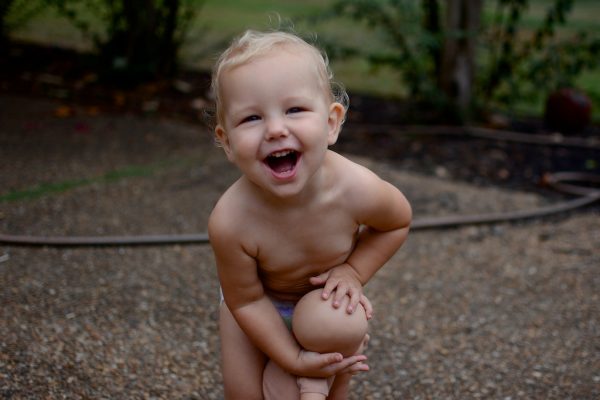 The biggest change in Anna recently is how old she perceives herself to be. She believes herself to be in charge of so much in our house. Honestly, this is refreshing because SOMEONE needs to right this ship. She follows our cat around shouting “NO! NO!” and waving her hands and shaking her head disapprovingly. She picks trash off the ground and throws it away in our blanket bin. She takes all the shoes out of our shoe bin, throws them around and then wipes her hands off like, “WHEW, it’s about time we crossed that off the ole to-do list.” 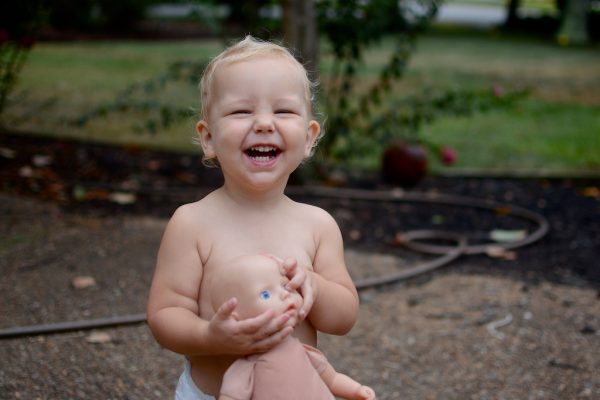 Anna is learning more and more words, and she understands absolutely everything we say. She can, I’m pretty sure, say “Mommy” in 47 different languages. She says “I-nuh” for “I want.” As in “I-nuh Mama.”  She also has her own version of each of the kids’ names. David is “Day,” Mary is “May,” and Thomas is “NO! NOOOOO! MOMMMMY!”

The best part of this language acquisition is how she responds to us. She gives us kisses and hugs on request, she is increasingly interested in books, and she waves and greets neighbors. When Tom comes home she squeal “DaDA! DaDA!” and to him belly-first with her little arms pumping. 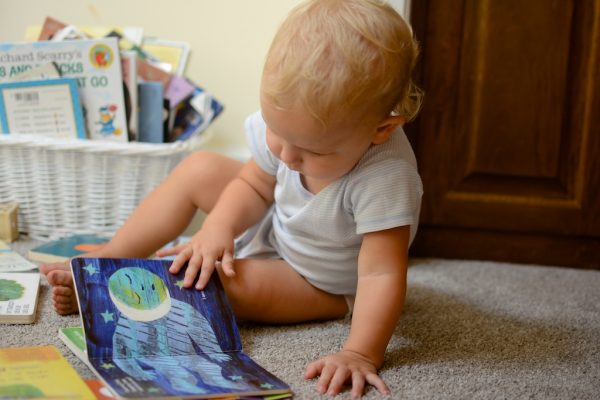 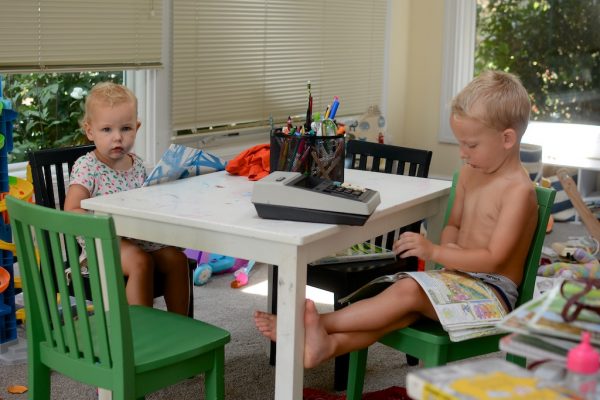 Sometime this summer Anna fell and scraped her wrist. This happened at a formative time for her, right when she learned the word that our family uses for minor injuries — “owie.”

Tom used to pull her into his lap and ask her, “Where’s your owie?” and she’d rotate her wrist and show him, her eyebrows suddenly furrowed in worry and her mouth formed in a dramatic O as she said “Oooooh! Ooooh!”

The owie is long-gone, but she’ll still show you, her owie anew anytime anyone asks. 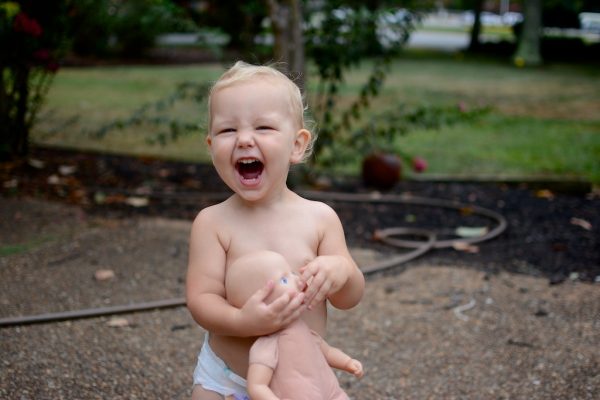 Anna loves to be rubbed — slow fingers over her soft skin. She’ll aggressively put her arm under your hand if you take a break. She also loves, loves to be wrapped in a towel. She brings me a towel and presents her back, whining until I realize what is happening.

I spend a lot of my day wrapping her in a towel and then texting pictures to Tom of Anna, plopped on our bed our couch, gleefully wrapped in a beach towel. 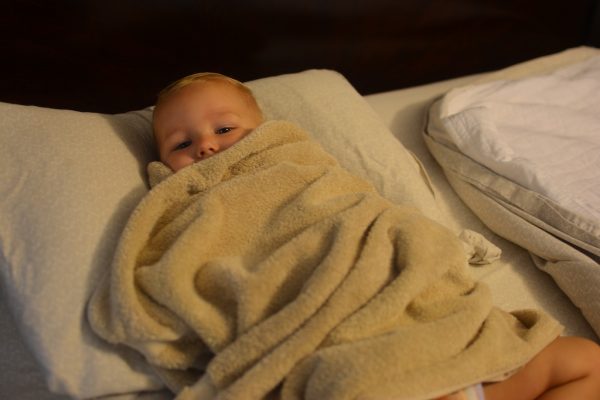 Anna has always been interested in dolls, but this month she’s upped her caregiver status. She totes around a doll (which we call “doll doll” as a call-back to toddler Mary) and offers it snacks and drinks. She puts it in her chair at the table, props it up on her tricycle, and absolutely loses her ever-loving mind when it topples to the ground.

That’s when I get to watch how she navigates these treacherous waters of parenting a baby. And when she throws her doll doll the ground, then dissolves into a frustrated heap, I gather her up and whisper in her ear, “These little years are tough. I know, I know.” 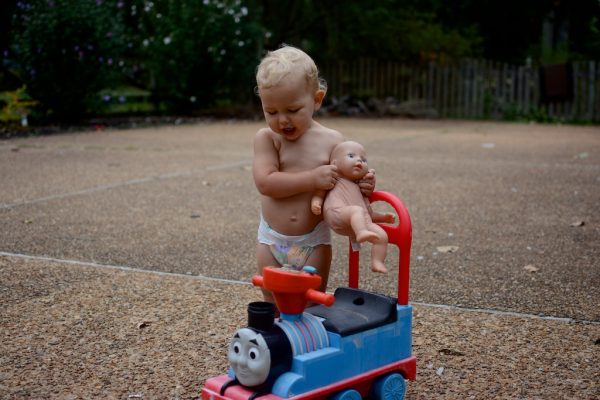 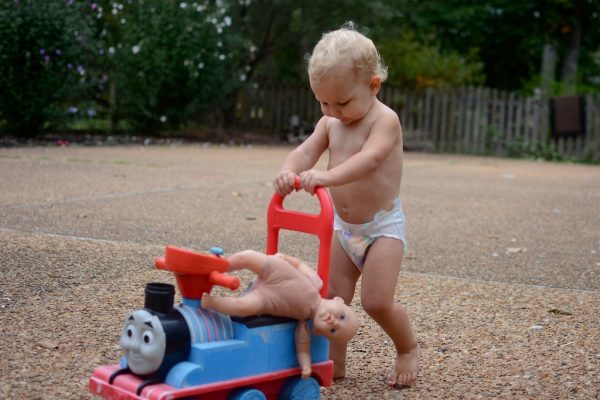 The other day I was at soccer practice and one of the moms said, in passing, that parenting a ten- and eight-year old is harder than a four- and two-year old.

Wow, did she ever unknowingly pull the pin in the grenade of my brain because I offered right then and there to change her mind in the form of lending her my toddler for a mere 15 minutes.

Having older kids involves mental and psychological gymnastics, territory I’m only just beginning to enter, but toddlers?  Anna can throw fits that make it impossible for Tom, a man who has a college education and can benchpress 275 pounds, to buckle her into her carseat.

Of the toddlers I know, Anna is pretty tame. But still, even a tame toddler is dangerous. No one can ruin dinner, up-end a room, or end a game like a toddler. The mere act of opening a drawer or uttering a word (for example: treat, play, go, swim, DaDa, etc.) can set her off on a toddler spiral of emotion and destruction.

And those blonde curls above her ear and the way she scrunches her nose when she smiles? Well, that makes her all the more dangerous. 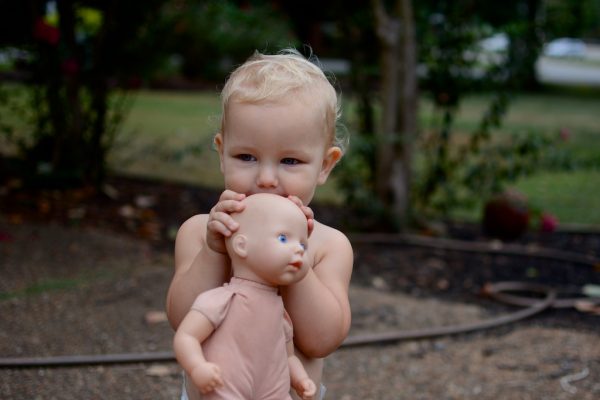 Before I say anything else, I want you to know this — at night before bed I nurse and rock you. When I put you in your crib you look up at me. You grin and wave, twisting your wrist and saying, “Ni-ni! Ni-ni!”

You love this ritual — what a big girl you are to have the responsibility of saying ni-night and waving to mommy. You giggle and grin and rub your blanket on your face. You think it is so funny.

And me? That moment is pure gold. I’m writing it here for the same reason I write everything — because I do not want to forget. Because I want you to know that when you were 22 months old you and your mommy smiled and waved at each other and said Ni-night.

School started for the big kids a few weeks ago, and suddenly our schedule has flipped upside down and inside out. The big kids are gone all day, Thomas is gone three mornings a week. When it’ just you and me, I take you for a run, and then we linger at a playground. I was looking forward to this time because I knew it would be easier, but I forgot what it would mean for me and you.

This precious, rare alone time is a chance for you to play and explore toys and playgrounds  without your managers telling you what to do and where to do it. It’s a chance for you to say “mama!” without competition, and get a response the first time (or, ok, the third time).

And for me, I get to push you on the swing without distractions, to gaze at your chubby legs, to linger with you over a bowl of Goldfish. To see you and know you, Anna at 22-months. My Anna Leigh, my beautiful Boozie-boo. What a gift.