Almost every year I write a blog post about my birthday.

I didn’t do it this year because I had a really, really bad birthday.

In the week before my birthday, I went to the grocery store and bought a few things to celebrate. Cinnamon rolls, bacon, and a watermelon. “I’d like to have some fresh watermelon for my birthday,” I mused.

Putrid watermelon dripped down the sides and under the refrigerator, all over our walls, seeping in a puddle on the floor.

(It was a little like this, except worse because, if you’ll remember, it was my birthday watermelon.)

We should have taken it as a sign, like when a bird flies into your window and breaks its neck. When your birthday watermelon explodes, you should just cancel your birthday.

I had not planned a huge celebration — I am an adult and do not expect a bounce house or pony rides (ALTHOUGH THAT WOULD BE NICE) — but I like to do special fun things with the kids. I prepped a special breakfast, then went to bed.

Three hours later, Thomas woke up screaming that he “burped,” because he lacked the vocabulary to tell us that he’d vomited all over his bed, and would continue vomiting for the next 12 hours.

The kids gave me cards in the morning, but the stomach bug is an attention hog that overshadows nearly any gesture, no matter how sweet. I spent most of the day cleaning, tending to Thomas, and wondering who would get sick next.

Over the next few days, Anna got sick, and then just hours before a few of my friends were planning to come to Richmond to celebrate my birthday, I got sick.

Fast forward to last weekend, almost a month after my birthday. Mary was playing when she had a familiar craving for Mexican food. She got to thinking…

She remembered that I’d had a bad birthday. And she wanted Mexican food. And so she thought, eh? Two birds, one stone?

She ran her idea past my mom (low-hanging fruit — my mom is always on her way to a Mexican restaurant) and then Tom, who called Uncle Steve and Aunt Lindsay, and just like that we had a full-blown surprise birthday party on our hands. 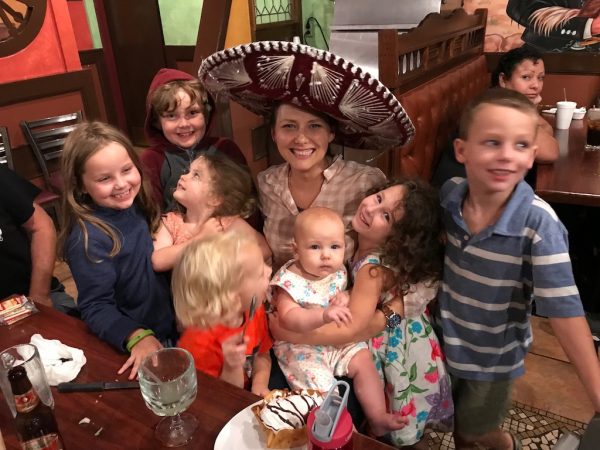 It was the most fun post-birthday birthday surprise ever, complete with a unlimited chips, a sombrero, and complimentary fried ice cream.

When we left the restaurant, I lifted Mary Virginia into the van and told her thank you. Celebrating my birthday a month after the fact felt a little…um…extra. But it was actually really, really fun. Really, really wonderful.

“Mommy,” she said, hugging me. “I think this will be a day we remember for a long time.”