A few weeks ago my mom and I were cruising Pottery Barn Kids and we saw these chair backers, and my mom was like, “Oooh! Those are cute. I bet they’d be easy to make.”
Then we kept looking around and saw these and decided that maybe, just maybe, we could make them, too.

So I pinned it. And then, a week later, I went to Pottery Barn Kids and bought the backers to use as an example, then went to JoAnn Fabric and bought all the materials. And guess what? Pottery Barn, eat your heart out. Actually, maybe Pottery Barn should be telling me to eat my heart out. I worked on the backers every moment David was asleep, about five hours a day from Sunday to Wednesday (20 hours total). My fingers are needle-pricked, there are scraps of materials all over my living room and I’ve been neglecting my husband. The kicker is: the PB backers cost $19 each (without a monogram) and I spent $45 at JoAnn Fabric. Ouch.

Part of the reason it was so expensive was because I over-bought fabric, but still. (And I think I can make more than one from what I bought.) This is a sentence I never thought I’d say, but: If you want to save yourself some money, just go to Pottery Barn.

To start, here are all my materials along with my Pottery Barn inspiration. I also looked around online and found this tutorial. She uses a sewing machine and her technique is a tad different, but it was still helpful.

Here’s my experience. I sort of figured everything out as I went, so this isn’t the only way to do it. That said, I hope I didn’t miss any steps.

1. Cut your pieces.
This was my mom’s suggestion. It might seem obvious to seasoned sewers like her, but to me this was critical advice. Here are all my pieces cut and laid out. (Except the bow tie. I got super-excited and made the bow tie before taking the photo.)

I measured every single part with PB’s backers as my guide, not guessing or taking any creative license at all. Note: I used two pieces of stiffened felt, glued together, for the bunny face, one piece for the backs. For the sheep, I used one piece of stiffened felt covered with camel-colored cotton.

2. Iron!
Several of my pieces needed to be ironed — the material I used for the ears and bow tie, and the material for the sheep’s face. It makes things look so much better.

3. Start construction.
Several pieces need to be constructed — the ears, bow tie, and the faces. I embroidered the faces with three strands of brown embroidery thread. For the ears, I cut fuzzy material and the woven material, arranged and pinned the ears, and then…very carefully…glued it all in place. For the nose and eyes, I embroidered the detail around the nose, then glued them all in place.

I had to keep the poor sheep bald for a while, but here he is all constructed before sewing.  This might be one of the most important things to keep in mind: pay attention to when you should construct/add each piece. I attached the bunny ears last, but the sheep ears early on, because the sheep ears needed to be under the sheep fur.

And I didn’t attach the sheep fur until last (but I would put it on every now and then just to see what it’d look like). I also sewed buttons for decoration, but straps connect with velcro (partially because velcro is easier than making a button hole, and also because little fingers can navigate velcro easier than buttons).

Here’s a strap from the bunny backer. 4. Start putting it all together…
I used a whip-stitch to attach everything. The stiffened felt faces, stitched to a strip of unstiffened felt. (The unstiffened felt is 22″ long, 4″ wide, then folded lengthwise, because one strip of felt seemed a little weak.)
If you’ve never done a whip stitch before, here are some clear instructions. I tried to keep my stitches even, but also (modeling off Pottery Barn’s example) pretty shallow and wide. This is what the inside looks like — I think it’s pretty. And here’s the back and front put together. (At one point when I was sewing, Tom walked in and said, “So what is this you’re doing? Is this sewing or knitting?” I don’t expect him to know what a whip stitch is, but really? The guy makes sure to get our cars’ oil changed and tires rotated, so I guess knowing the difference between sewing and knitting is too much to ask.)

5. Finishing touches…
For these, after it was all sewn, I still needed to glue the sheep’s face fur, attach the bow tie and attach the bunny ears. For both pieces, I glued them first, then secured them with a few stitches. Wow. 20 hours of blood, sweat and watching reruns on Hulu all boiled down to five easy steps.

The good news is: David loves them. He checked both of them out, looked inside, and really liked them on his chairs.
(And they didn’t fall apart!) The bad news? We aren’t planning to keep them. But don’t tell David, not yet.

I am planning to make more, but don’t tell Tom. He thinks that I’m done so, instead of sewing,  I’ll actually talk to him during dinner again. 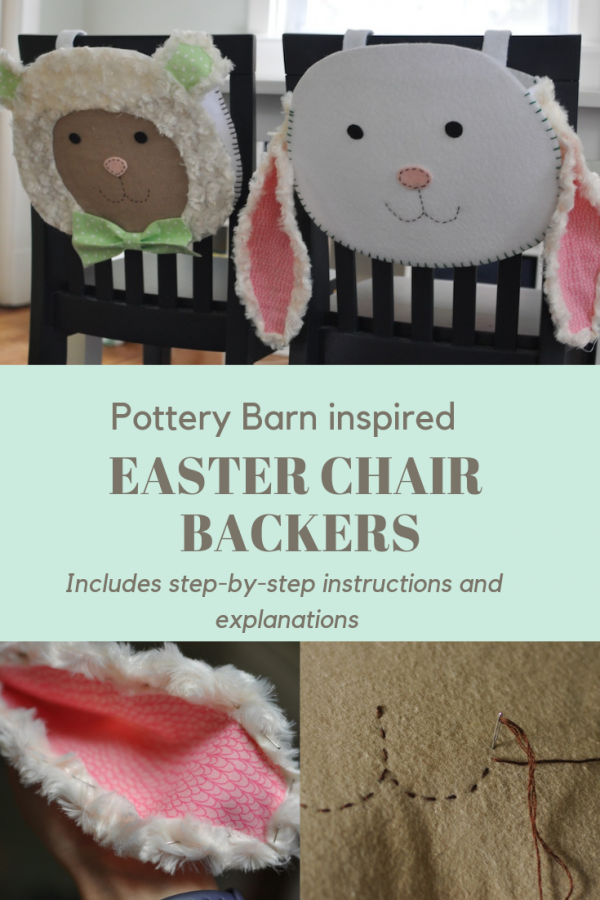