Thomas turned 23 months old this week. Since I didn’t write a 22-month update, I’m left with the task of writing about all the way he’s changed in the past two months, which is an impossible task my friend.

Toddlers. All they wanna do is grow.

One thing I realized while preparing this post is that I don’t take enough pictures of Thomas. In the past two months I’ve taken nearly 600 pictures and what you see in this post are the best-of Thomas pictures. What can I say? Being the third kid comes with pros and cons. Pro — much more likely to get M&Ms in your Easter basket. Con — an undocumented childhood. 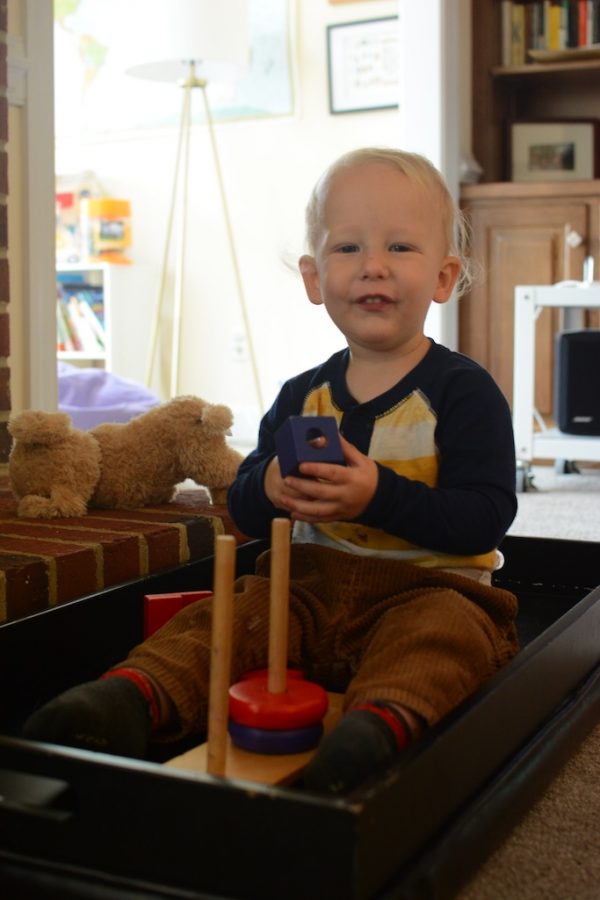 Thomas’s one steadfast quality is that he’s eternally playful. Ok, I should also mention that he does have a scream-y, grumpy, toddler side. But mostly he’s incredibly good-natured. He always wants to play, go outside, to laugh. He’s the guy you invite to your wedding because you know he’ll get everyone out of the dance floor. He’s your friend who starts the wave in the football stadium. He’s he one in your group who’s always for a good time, and when you go out with him you don’t know if you’ll end up downtown with friends or arrested in Mexico. Whatever happens, it’ll be a wild time.

If I hold my hand over his belly like I’m going to tickle him, he erupts in laughter without me touching him.

That’s the kind of kid Thomas is. 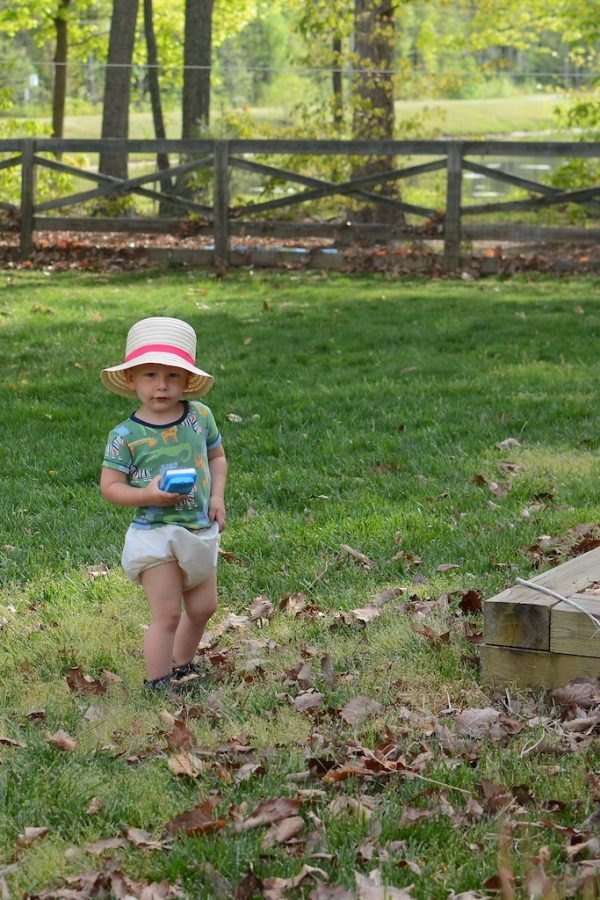 Thomas has become so much more social in the past two months. He loves waving hello and goodbye, and when we’re out in the yard he stops playing to wave at cars. He does it almost with a sense of obligation, the way Kate Middleton waves when she steps out of planes. It’s genuine, but there’s also an element of, “I have to give the people what they want.”

Thomas waves at cars, planes, trains, bicycles, and any type of lawn equipment. He also has what I call a “stink face.” Furrowed eyebrows, lowered head. He does it if he has something he thinks you are going to take (a snack, toy, etc.) and you enter his personal space. 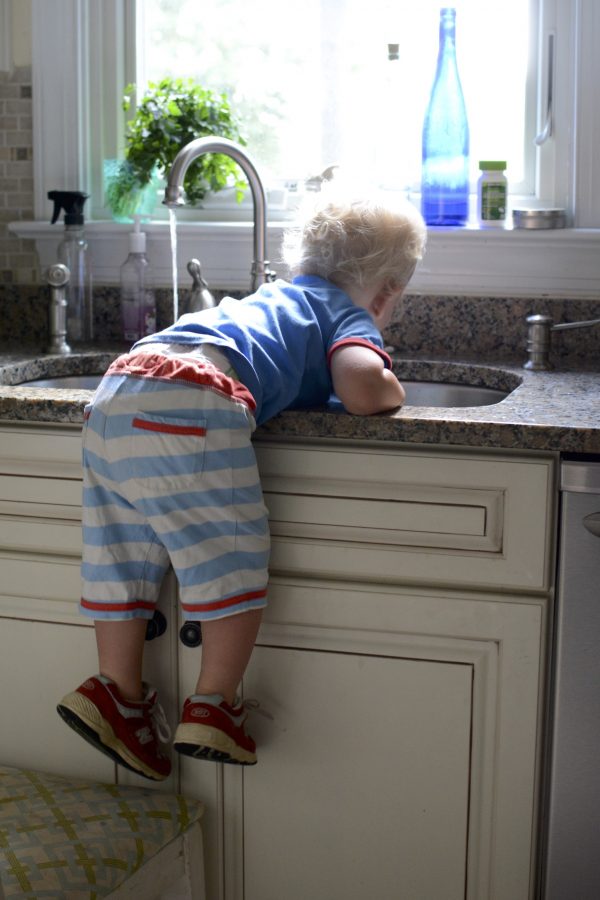 Thomas’s vocabulary is growing slowly and steadily and he is ALWAYS TALKING. He is deliberate and thoughtful with his nonsensical babble, just none of us understand it.

His favorite word is HOT, and he says water, no, Bon (Brigham), cookie, fun, play, boots, fish, doggie and outside. He knows the names of all our neighbors and he has all the vocabulary necessary to ask for candy. Like I said, he’s always chatting and babbling, my challenge sometimes is to pull the words out of the surrounding babble.

I’ve actually been sightly worried about his speech. I compare him to his siblings, even though I know I shouldn’t, and his verbal development is just different than theirs. I know that two kids isn’t an adequate sample size, but it’s all I know.

Then one day at the store I was talking with a woman for a bit and before she left, she said, “He speaks so well for his age.”

She went on to tell me that she’s a speech therapist, and we talked about his babble, his expressions, his desire to communicate.

I now refer to that as the day God sent an angel to Kroger to teach me to chill out already. 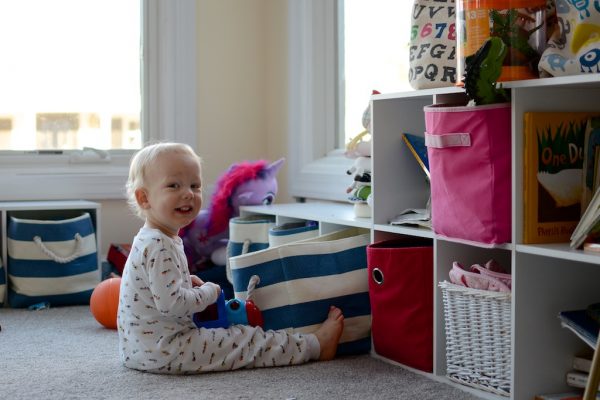 I’ve always had these back-of-my-mind nagging concerns with Thomas. Remember when he wouldn’t roll over?

Another con of being the third kid — your mom thinks she knows what she’s doing, and it’s your job to teach her that she doesn’t. 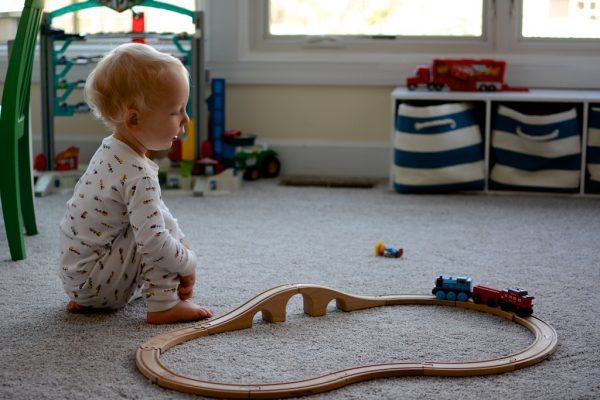 Until recently, Thomas expressed extreme disinterest and actual DISDAIN for books. Anytime I read to the big kids, Thomas became enraged and would snatch the book.

Everything changed recently. He’s discovered a few books that he likes, and I find him sitting on the couch reading several times a day. His favorite book is our family photo book. Thanks to that book, we learned that he knows the name of most of our family members, but the memories he gets most excited about are the ones that include balls, balloons, and Brigham. 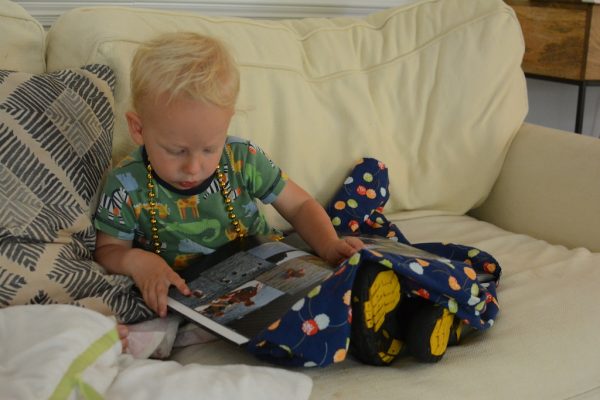 Thomas’s absolute favorite thing is to be with his siblings. He desperately wants to be with them, doing exactly what they’re doing. Yesterday I told the big kids to clean up, and they both fell down and started whining. Then Thomas did the exact same thing. When I brush and floss the big kids’ teeth, Thomas walks up with his mouth wide. Honestly, before this I would have told you I’d rather try my luck as quarterback for the Patriots in the final minutes of the Super Bowl than try to floss a two-year old’s teeth. But a two-year old wanting to mimic his big brother and sister? That’s a different story.

He loves them and doesn’t hear them when they scream, “NO THOMAS!” He messes up their games, happily, and ruins the things they’ve spent all morning setting up.

He doesn’t hear them and they don’t hear me when I say, “Thomas is just a baby, he doesn’t understand! Can you give him something to play with? Can you include him? He’s just a baby!”

Once, after my big speech, Mary Virginia said, “Mommy, he’s not a baby. He’s almost two.” 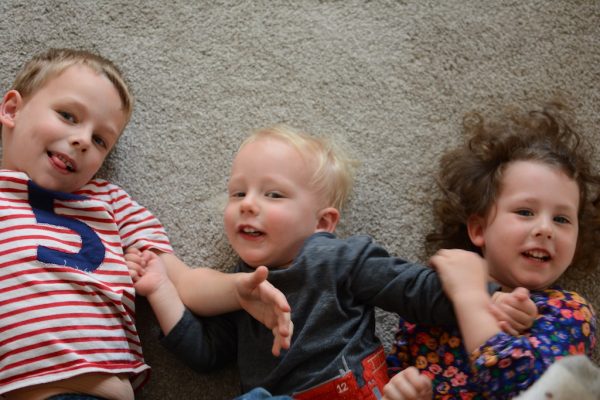 When David was your age he was about to start preschool and I didn’t understand why discipline wasn’t working. When Mary Virginia was your age, she was potty trained and writing screenplays with her bizarrely advanced vocabulary.

They seemed so old at 23 months.

The biggest difference between them and you, of course, is that they both already had younger siblings. The idea seems impossible, the idea of you being an older sibling? You’re still a baby!

That’s what happens, I suppose. You get to be a baby until you can’t be anymore.

Even an overly sentimental mother cannot deny that you are rapidly becoming a big boy. You are fiercely independent and opinionated. Every day, it seems, you get a little leaner, a little taller, a little closer to two. I want to hold on to the baby as long as possible, not because I don’t want you to grow up, but because I always want you to be mine. I don’t want to lose your complete trust, reliance, dependance. It’s hard to imagine that one day you will feel disappointment and your instinct will be something other than crawling in my lap.

Here, on the edge of two years old, I want you to stay. Not frozen in your babyhood but I want you to always come to me, to rest your head on my shoulder, to let me rub your back and stroke your hair. You’ll have to forgive your mama’s emotions. I apologize in advance for calling you a baby around your peers.