Here we are, on the other side of Halloween 2016 and can I just say: WHEW!

We made it, guys. I don’t know what it is about walking with my family through our neighborhood in the dark that takes it out of me but MAN am I wiped out today, maybe for the rest of the week.

Maybe it was the costumes, or maybe it was the dangerous proximity to bedtime. Maybe it was the urgency to keep moving, because KIDS! THE FASTER YOU WALK THE MORE CANDY YOU GET! So we were walking at Krieger-pace, and I’m going to need to increase my VO2 max before trying that again.

Before I talk about Halloween, I want to share our pumpkins. You read the title of this post correctly, what you’re about to read is a pumpkin novella…

Last week both the kids had field trips to the pumpkin patch with their preschool classes (I know, forget everything I said about pumpkin patches) and they both got to bring home pumpkins. David chose a snake gourd, and when he picked it up he held it over his head and announced, “I WANT TO MAKE THIS INTO A CROCODILE!”

I thought it was an awesome idea, so that’s what we did. I hope you already assumed that this pose was David’s idea. My idea was for him to sit on our steps holding his crocodile snake gourd. When we did that I kept having to say, “SMILE! No, a real smile. Look at Mommy! David! Look at Mommy WITH YOUR EYES!”

Then David suggested he pretend to “kill the crocodile” and he suddenly became a Tyra Banks protege on the finale of America’s Next Top Model, finding the light and grimacing with his eyes. After David’s field trip I mentioned to Mary Virginia that there were pink pumpkins, and that was a side comment she did not forget. Two days later when her class went to the pumpkin patch, I kept suggesting this pumpkin? What about this one? Look at this fun pumpkin! And she turned around and glared, “No, Mommy, I want a PINK PUMPKIN.”

We walked through that entire pumpkin patch looking for a pink pumpkin. The whole time I was holding Thomas who did not want to be held because, you know how when some people see a disheveled pile of papers and they can’t help but organize it? That’s Thomas, except when Thomas sees a pumpkin, he has to sit on it.

We kept walking farther and farther away from our van, and just before I reminded her that I hadn’t brought our passports so we might want to abbreviate this journey, Mary Virginia sees The Pink Pumpkin.

I kicked it over and scanned for Black Widows, which, by the way, were everywhere. Everywhere, meaning I killed five. Since I started ranting about black widows I’ve learned that this is completely normal, and to be expected around large produce. That’s fine. All I’m saying is maybe “pumpkin patch” is a misnomer and they should start calling it a “pumpkin patch of horrors.”

Once I declared the pumpkin spider-free, I picked it up and fell over. Pink pumpkins are a lot heavier than orange pumpkins and a lot heavier than snake gourds. There was no way I could carry that thing. I stood there for a while, trying to decide what to do. I had a baby, a preschooler, and a pumpkin. I tried balancing the pumpkin on one hip and then picking up Thomas, then I tried holding Thomas and picking up the pumpkin.

I looked at Thomas, looked at the pumpkin, and looked at my van off in the horizon. Some friends from the field trip were at the entrance of the patch, so I knew I had to get Thomas to them.

Let me stop for a moment. This is not the blog post I intended. I intended to write a quick story about their pumpkins and move on but this story has to be told because this is the kind of mind-numbing strategizing that parents deal with all the time. When I decided to have kids I never imagined I’d one day be standing in a field with three 30+ lb. objects wondering how to get them all into my minivan. And when you figure it out? No one appreciates you. This story does not end with my preschooler saying, “Way to go, Mom. That really was a conundrum there and you made it happen.”

Mary Virginia doesn’t like to be left alone, not even in the house. She follows me around and screams if I leave her line of sight. With this in mind, I leaned down and said, “Mary Virginia. If you want your pumpkin you need to sit here with it for a minute while I take Thomas to Mrs. Jessi. Can you do that?”

I knew it wasn’t going to work, I knew that when I returned she’d be sobbing, but I grabbed Thomas and ran anyway. I threw him to my friend, shouted something about a pink pumpkin, and ran back to Mary Virginia, who was sitting on her pumpkin, as deadpan as a member of the Queen’s guard.

So I guess she can be left alone if a pink pumpkin is at stake. She asked me if I could turn her pumpkin into a princess, and I said YES! I would love to!

I spent Friday night curling pipe cleaners and making a tiara for a pumpkin (that’s right, 22-year old Amanda, are you reading this? In 12 years your Fridays are going to take a left turn you’re not prepared for), and put sparkles on her blue eyes.

In the morning Mary Virginia skipped past it on her way to breakfast. I asked her if she liked it and she nodded and said, “Mommy, after Halloween can I take all that off?” The day before Halloween, Tom and the kids scooped out the pumpkins and I carved them. That’s David’s pumpkin in the middle. He designed his and I carved it and amazingly that’s the exact face David makes when I tell him he’s watched enough TV for the day. Except without the smile. Mary Virginia is the cat, and Thomas is the mouse. Tom is the pumpkin on top and my pumpkin is laughing because it’s going to eat all the Snickers when the kids are in bed. 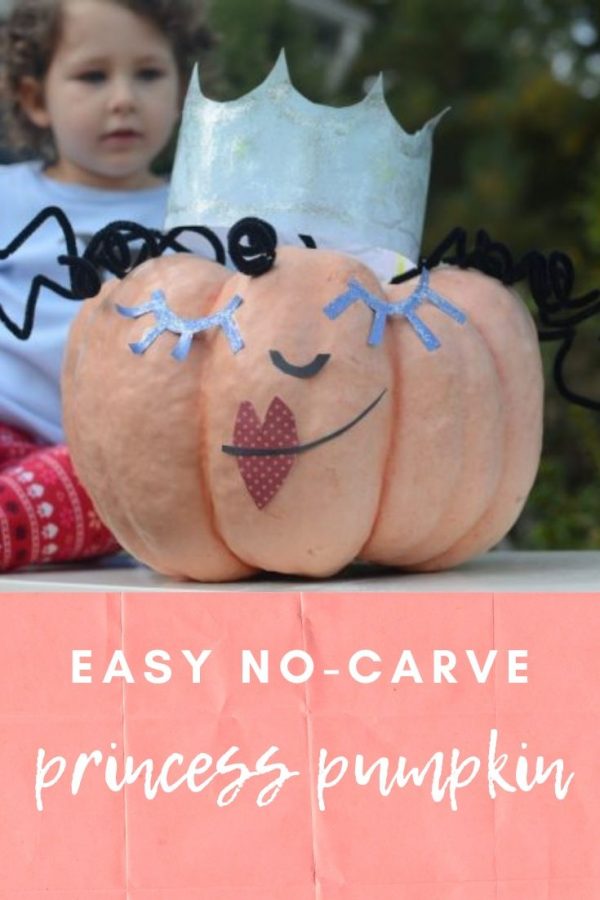