My friend Sarah gets the award for the Most Astute Blog Reader. She posted this on my Facebook wall right after we announced our baby on the way.

I already wrote a post about what I did differently for this race, but I failed to mention one enormous detail: I was 10 weeks pregnant on race day.

Let’s start at the beginning. Pregnancy and the half marathon were both things Tom and I were planning on, but I didn’t know they were going to intersect when they did.

Tom and I became open to the idea of getting pregnant with #2 in May. If that had happened I would be due next month. Yikes. I was still nursing a lot back in May, so we didn’t really expect it to happen immediately, and it didn’t.

I was only nursing once a day, in June and July, but it still didn’t happen. I started to stress a little. We got pregnant immediately with David, so I didn’t understand the concept of waiting a few months.

Meanwhile, I was also considering running the half marathon. I started training in July but was nervous about it so I didn’t talk about the race until September. By then I’d started doing long runs, David had been weaned for two months, and I still wasn’t pregnant. I’d started running a lot, and realizing the demands I was putting on my body, I decided to focus on the race and chill on the whole “I’m not getting pregnant immediately” freak out.

So I started to focus on the race. I was doing lots of speed work, tempo runs, strength training, and cross training. My training partner Sharon and I worked really, really hard, and we were nailing our times. It started looking like we were on our way to a PR race.

Then on October 9 I found out I was pregnant.

It wasn’t a surprise, but the timing was. When I planned to do the half, I thought I’d either be something like 16 weeks pregnant, and I’d run/walk it easily, or I’d be like four weeks pregnant and either wouldn’t know yet or it wouldn’t affect my running.

But 10 weeks!? I started worrying immediately. I started dreading my long runs and speed work, and felt ill when I thought about the race (I talk about my dread here, pregnancy is the biggest reason why). First trimesters are tough, relentless and unpredictable. I don’t get morning sickness, but I am e.x.h.a.u.s.t.e.d the whole time. Tom and I also like to tell friends and family about our pregnancy late in the game, so no one would know about the baby. I like having excuses when it comes to running, and pregnancy is a pretty valid excuse…unless no one knows about it.

I decided to go forward with the race for these reasons:

At 10 weeks you don’t need maternity clothes or anything, but pregnancy did change my training for the last month and a half, and race day. This is how:

I think that’s all? I think? I probably forgot something, it’s been a while and I’m pregnant so the only thing I remember these days is meals.

Now I’m almost 21 weeks pregnant, still exhausted, still eating everything in sight, and still running when I can.

And this girl? I don’t even recognize this girl anymore.
But I sure can’t wait to run past her. In like a year. 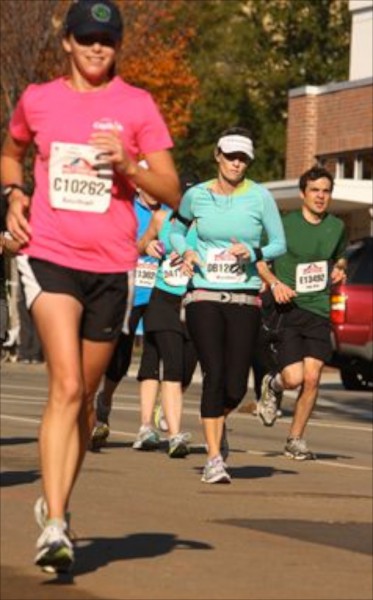 Any other running moms out there? How did pregnancy change running and racing for you? 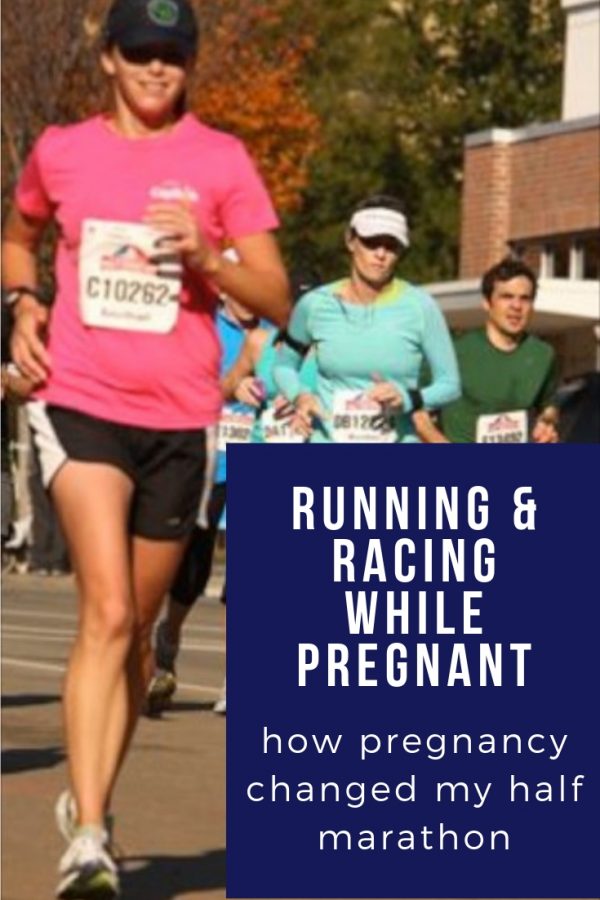